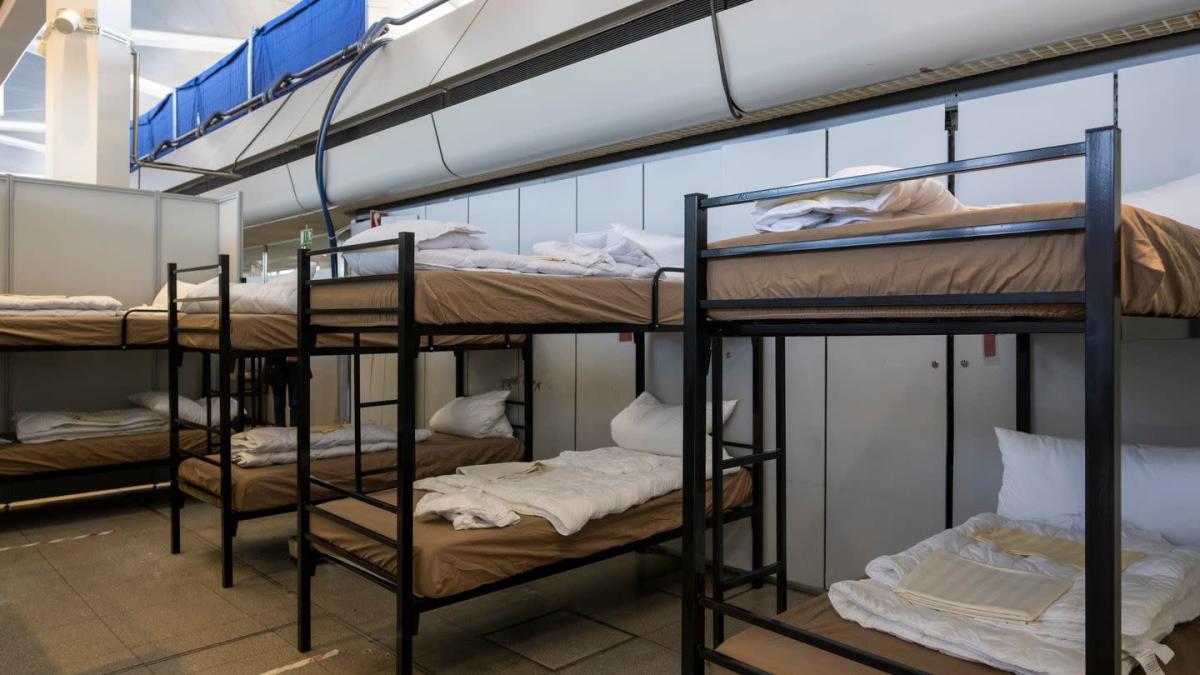 Berlin (dpa) – “Hygiene articles” or “animal feed” is written on the white papers taped to the check-in counter. Others have breakfast, lunch and dinner times written in English.

Large vacuum thermos with water or support for coffee and tea on metal carts. The children’s photographs are glued to the glass panels of the makeshift play area and a corona testing area. A woman walks with her dog on a leash through the corridor of Terminal A. The old Tegel airport has been revived for a week. Where airline passengers once waited at the gate, there are now separate rooms, each with five bunk beds.

“In three days we woke up Tegel from his sleep,” says Detlef Cwojdzinski, project manager of the new Ukrainian arrivals center TXL. As soon as the infrastructure in the old main airport terminal, such as the fresh water supply, was up and running again, the first 425 refugees stayed here, including 105 children. Since then, the number of beds has grown steadily and is now around 700. Two bays of hexagonal Terminal A are already occupied, with others to follow.

Because the Berlin Senate still expects thousands of people to come to Berlin every day. Your accommodation and care at Tegel Airport should be as professional as possible, with the help of a new distribution center, among other things. Governor Mayor Franziska Giffey (SPD) announced on Tuesday that this should go live by the end of the week. According to the social administration, an exact date has not yet been set. “We open as soon as possible,” spokesman Stefan Strauss said Friday.

In recent days three tents have been erected on the track. It is planned to register up to 10,000 refugees who arrive at the center every day and make a binding decision on which federal states they will travel to. Several hundred employees are needed for this, including 80 Bundeswehr soldiers to help. According to the project management, the processes were rehearsed on Friday with the arriving refugees.

So far about 6500 people have registered

The State Office for Refugee Affairs (LAF) is confident in the new distribution center: “Then we will be able to register and distribute many more people who are currently still housed in temporary and regular LAF accommodation because otherwise they would not have a roof. over their heads,” according to spokeswoman Monika Hebbinghaus. According to rough estimates, since March 7, around 6,500 people who have actively denounced have been registered.

With the new structures in Tegel, traveling refugees should not even enter the airport building. Three more tents have been erected on the track. “People are taken care of there and can, if necessary, sleep before continuing,” explains arrival center spokeswoman Regina Kneiding.

Dogs and cats are also allowed.

People staying in the capital will initially be accommodated in Terminal A. People must stay in Tegel for a maximum of two to three days. First, a rapid corona test is performed, followed by a brief medical examination. If you are healthy and do not need further care, you will be assigned a bed. Dogs and cats are also allowed. Where there used to be shops in the terminal, there is now an animal station run by the association for animal welfare and protection.

As with the vaccination centers in Berlin, the German Red Cross (DRK) is responsible for managing the project at the closed airport. For the implementation, the organization brought Cwojdzinski, 67, out of retirement again. The former crisis manager of the Berlin health administration was already involved in setting up the vaccination centers in 2020. His tasks include recruiting staff and coordinating the aid organizations involved, Arbeiter-Samariter-Bund, DLRG , Johanniter, and Malteser. In addition to housing, each has another task.

“I didn’t want to do such a big project anymore,” says the 67-year-old. But in view of his experiences and contacts, it was clear to him that he couldn’t say no. He feels the same way as the long-time chairman of the Federal Agency for Technical Assistance, Albrecht Broemme. The 68-year-old took over the coordination of the Ukrainian war refugees in Berlin for the Senate, having managed the construction of the emergency hospital on the fairgrounds during the corona pandemic and then coordinated the construction of the vaccination centers in the capital.

“Now we have a great experience. Structures, processes – and the people for them. That is the end and the end,” explains the project director. “I draw a lot on the concept of vaccination here,” he explains, looking at the site of the disused airport. The vaccination center, which opened its doors in February 2021 and currently used in particular for children’s vaccinations, is still in operation at Terminal C, a few meters away.Up to 100 people still come there every day, reports spokeswoman Kneiding.

After more than a year, the center is in “regular operation”, while several hundred people are still active in the construction team at the neighboring arrival center. “We have to run solid operations. From emergency mode to normal operation”, emphasizes Cwojdzinski. At the moment, you can’t say how quickly this will happen. But the pensioner also wants to achieve this quickly in his own interest.