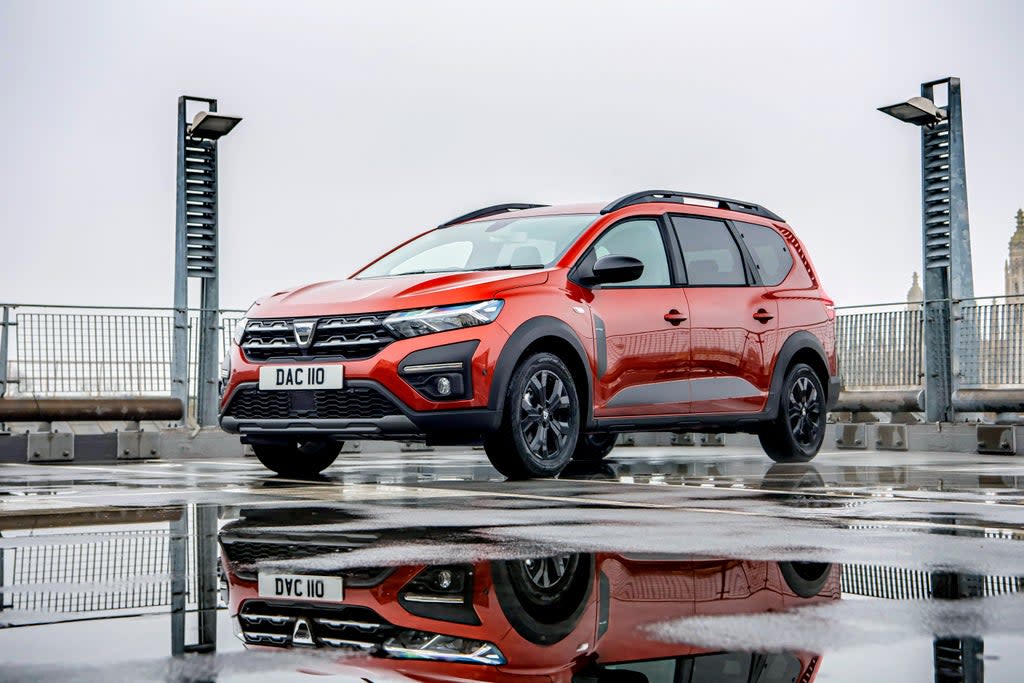 If you have a large family but a small budget, the new Dacia Jogger will come to you as great news. The Sandero-based Jogger is the cheapest seven-seater you can buy, in fact you’d normally have to spend at least double the car’s £14,995 asking price to accommodate that many people.

And it’s not just cheap, it’s cheerful too. With its one-litre three-cylinder engine it won’t set the world on fire when fully loaded, but it’s powerful enough most of the time, and with its good six-speed manual gearbox, decent steering and willing personality. it’s fun to drive.

My test car was a top-spec Extreme SE TCe 110, and it came with cruise control, heated front seats and satellite navigation, which brought the price up to £18,300. But this is still a good value because you get a lot of car for the money.

With three rows of seats to accommodate, boot space is paltry at 170 litres. But the third row can be tilted forward to create more space or removed entirely quite easily. The center row can also be tilted forward, creating, in essence, a station wagon.

The seats are a bit firm but provide reasonable support, the middle row is big enough for adults, but the third row is better reserved for children. Legroom is reasonable and headroom is excellent, and there are some well-designed folding tables for center-row passengers.

The style is a bit mixed. It looks good at the front with stylish headlights and stylish daytime running lights. The rear, with its Volvo-like lights, is a bit boxy and where the two ends meet, next to the B-pillar, there’s a 40mm step, making it look like the front and rear were designed by different people who hadn’t been talking to each other.

The simple, well-designed cabin includes a mobile phone holder connected to the infotainment screen, and there’s a USB port conveniently nearby. However, it is a bit close to the steering wheel and you could easily inadvertently hit it with your hand. But it is removable.

There are some rough plastics in the cabin, but Dacia has measurably improved the feel of the interior by using a quilted cloth panel on the dash, which softens the look.

Dacia claims a fuel economy of 48.7 mpg, which I can easily believe for a 200-mile trip in which the racer seemed to barely take a sip of fuel. But there were only two people on board at the time, and with a full load, with such a small engine, fuel consumption would go from sip to gulp.

With its small engine, the Jogger has to be light, so doors close with a bit of a clank, sat-nav graphics aren’t the best, and the radio sounds a bit tinny.

My test car had its own bugs: a stop-start system that didn’t always stop, a clock that frequently stopped but then corrected itself, and a blind-spot assist system that chose to warn about some cars. but not on others.

Slightly irritating as it was, it didn’t change my opinion of the broker. It is a cheerful and pleasant car that is excellent value for money.

In fact, Dacia has a financing plan that will allow you to purchase a new Jogger for £195 per month, after paying a £195 deposit. Cheap enough for you?