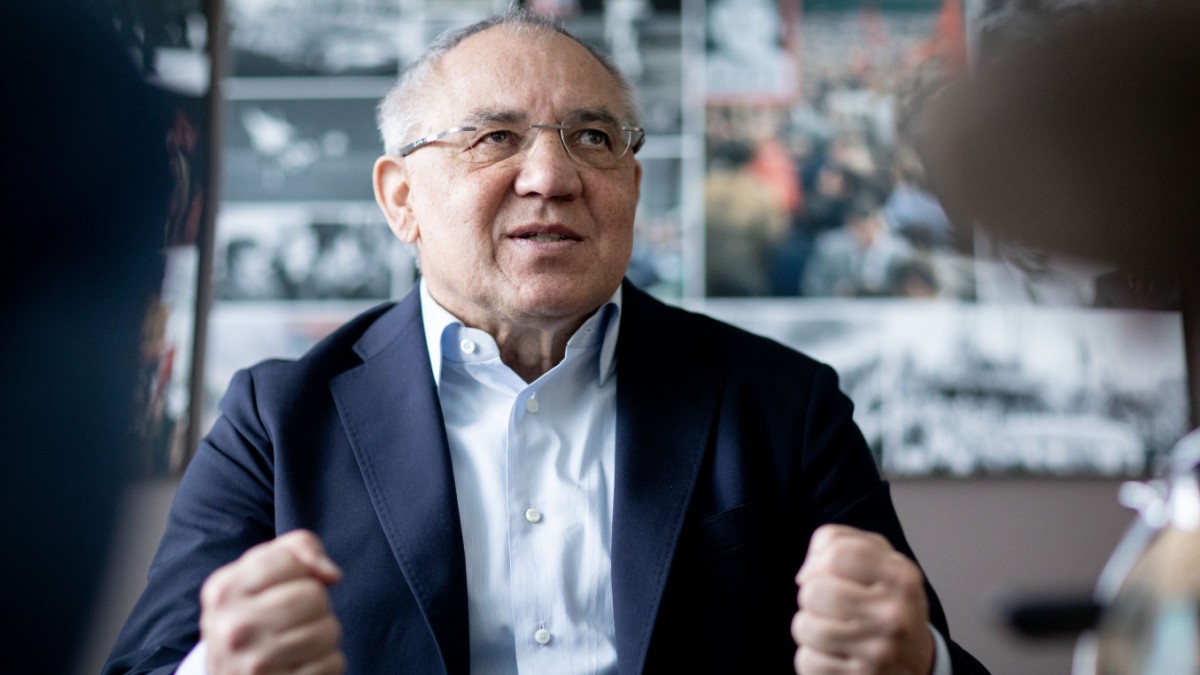 It was already clear on Saturday night what would happen at Hertha on Sunday. At the latest, when Hertha manager Fredi Bobic, 50, stood with former legend Lothar Matthäus, 60, in the mobile studio of the Sky television network and said that Hertha officials “would first discuss it calmly” and finally added, “We will definitely comment on this tomorrow.” At least you could see the first part of the show coming.

On Sunday, shortly after 11 am, it was over for 47-year-old coach Tayfun Korkut in Berlin. “After intensive analysis and evaluation of the current sporting situation, the management of Hertha BSC has decided to release Tayfun Korkut from his position as head coach of the licensed team with immediate effect,” the club announced.

In the late afternoon, Hertha BSC created a real sensation. An old acquaintance from the grinder division was named as his successor until the end of the season: Felix Magath, who is also called “Quälix” for good reason.

Magath, now 68, has not worked in the Bundesliga since leaving VfL Wolfsburg ten years ago. His last coaching role was with Shandong Luneng in China in 2017. As big a surprise as it was, Magath’s appointment seems appropriate in the current general situation, in which Hertha, known to be named after a steamship hiking Spree, run towards an iceberg called descent. To paraphrase a former Magath player, Jan Aage Fjörtoft, who met the grinder in Frankfurt: It is not known whether Magath will save Hertha. But at the end of the season, the passengers of the steamer will be fit.

“Felix Magath’s resume speaks for itself,” manager Fredi Bobic said in a Hertha statement. The trainer will turn the correct screws. It sounds bad that some of Hertha’s paths will soon lead to sprints towards Teufelsberg. Unless the coach finds the time and money to build his own hill, like “Mount Magath” in Wolfsburg. Magath became champion in Wolfsburg in 2009.

Fredi Bobic obviously found it difficult to kick Korkut out. Among other things, because it has to be read as correcting a mistake that reminded Bobic in a frankly sadistic way – Lothar Matthäus. On Saturday night, the 1990 world champion suggested entrusting the rescue to 45-year-old thoroughbred Hertha Pal Dardai. What you need to know is that Lothar Matthäus is not only an expert on Sky, but he also feels connected to Dardai. Connected enough to know how things are going with relations between former Hertha playmates Bobic and Dardai, since Bobic sacked the Hungarian at the end of November, to bring in Korkut.

Kovac, Funkel, Gisdol: the list of names that have been speculated on in the meantime was long

With Korkut there was a “promising start with seven points in the first four games”, Bobic said on Sunday morning, also in writing. Solo: That changed drastically in the second half of the season. In 2022 there has been no victory so far, with Gladbach 0: 2, Hertha only sees SpVgg Fürth when looking back. But to a person with a sense of humor/life seems strange…, author Peter Hacks once wrote. Defenders Dedryck Boyata and Pal Dardai’s son Marton Dardai laughed shortly after Gladbach’s 1-0 lead on the substitutes’ bench, a branch similar to that of chancellor candidate Armin Laschet following the flood disaster in the Ahr Valley. Now Magath is more of an end to the fun. There were players in Frankfurt who named Magath, after the former Iraqi dictator, “Saddam”, but unlike Magath, he didn’t just dry tea bags on a spoon.

Dardai Jr. laughed almost on behalf of the father, who, according to rumors, has been smiling for some time at the irony that Hertha bites from the heart. In the summer of 2019, then-manager Michael Preetz congratulated Dardai that his football was not considered attractive enough (which he was not). Dardai then returned in January 2021 because his successors Ante Covic, Jürgen Klinsmann, Alexander Nouri and Bruno Labbadia were unable to get Hertha off the ground; At the end of November 2021, he was again on leave from Bobic.

The irony: at the end of Korkut’s rule over all things, Dardaism happily celebrated its birth. Korkut pissed off his team on Tuesday in front of the cameras, which is not really his style, but it happened before with his predecessor, especially Magath. Korkut then fielded eight defensive players at Gladbach, against his very nature and in the spirit of Dardaism. And from the beginning, Korkut trusted Davie Selke, a decision steeped in agnosticism. Because: The answer to the question of whether Selke is a fit striker for the Bundesliga can only be answered in the same way that agnostics answer the question of the existence of God: it has not been clarified. There’s no need to worry about Selke though: Hertha are anything but alone with him on this issue.

Also striking: There were only two players signed by Bobic in the starting eleven. Apart from Ishak Belfodil, there was only Marc-Oliver Kempf, who joined from VfB Stuttgart at the end of January and conceded two penalties against Hertha in four games for Hertha (and was red carded against Leipzig). In the eyes of many Hertha fans, he is under suspicion, scandalously of course, of being a member of VfB Stuttgart’s fifth column, which is also in danger of relegation.

“We would prefer to exchange completely different things,” coach Bobic complains about the team.

On Saturday, it was a Kempf foul on Gladbach striker Marcus Thuram that prompted Alassane Pléa’s penalty to make it 1-0 for Gladbach. In the second half, Hertha conceded 2-0 after a corner (minute 59). Coach Bobic made it clear that Niklas Stark had forgotten to be responsible for later goalscorer Matthias Ginter. But Selke’s passivity when Ginter climbed up next to him to head the ball was unbelievable and certainly not coach Korkut’s fault. Apparently Bobic has something like that too. “We would rather trade completely different things,” complained the manager at ZDF, which is nothing more than a vote of no confidence in much of a dysfunctional team. “I can tell you, Tayfun Korkut hits everything,” Bobic said. Selke also found Korkut’s plan a good one: “We managed to do it for long periods, but not for long periods either,” he said. The stages they failed to overcome were the longest overall.

And now? Since the summer of 2019, Hertha received €374 million from their investor Lars Windhorst; In light of the transfers made, one wishes the club in hindsight had elevated George Best’s famous joke into a business plan. In other words: spend the money on booze, women and fast cars and splurge on the rest. Hertha on the other hand? he is no longer alone in the face of fragments, but in the face of an existential crisis; which, however, does not prevent President Werner Gegenbauer from going further when it comes to statements to the public missing is applicable. Where: He was seen on Saturday in Gladbach’s VIP stand and on Sunday morning in the car park in front of the Hertha office. And he brought home a surprising message: that all the speculation about Markus Gisdol, Friedhelm Funkel and Niko Kovac was nonsense, and that Magath will return to the league.