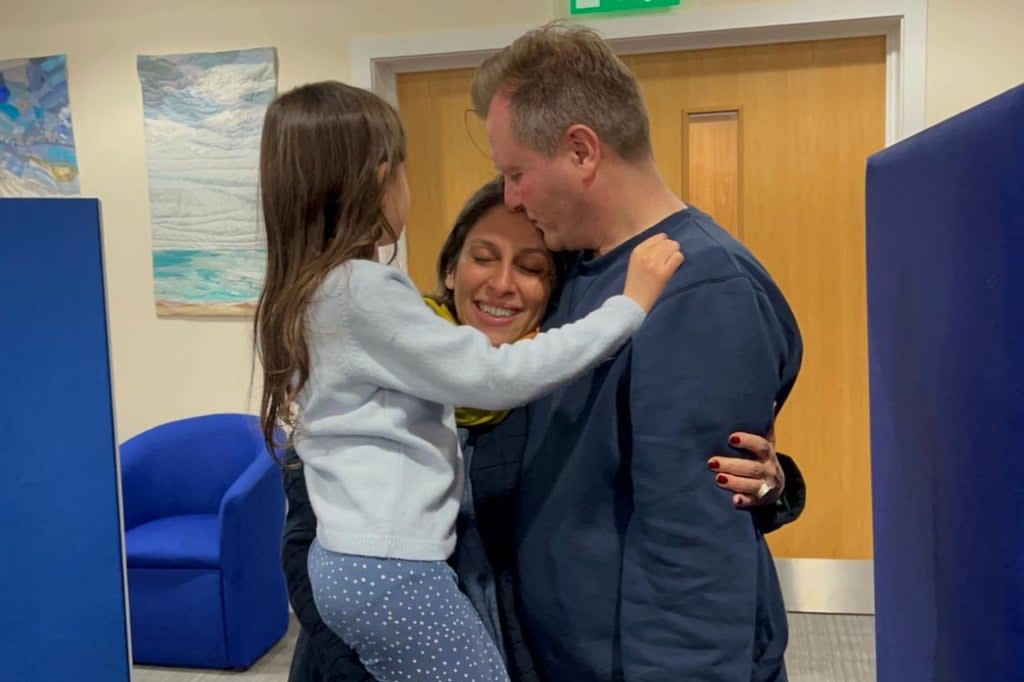 Tears of joy were shed as the families of Nazanin Zaghari-Ratcliffe and Anoosheh Ashoori were reunited with their loved ones early Thursday morning after years of a “long and cruel separation” caused by their detention in Iran.

The pair landed on British soil at RAF Brize Norton shortly after 1am. A video shared on social media showed the emotional return home as Mrs Zaghari-Ratcliffe hugged and kissed her young daughter and Mr Ashoori’s family sobbed.

The couple left Iran on Wednesday after the UK agreed to pay off a 400 million pound debt owed to Tehran.

Ms. Zaghari-Ratcliffe spent almost six years imprisoned in Iran. Ashoori, a British-Iranian businessman, had been detained in the country since August 2017.

The couple smiled and chatted as they walked from the plane to a reception building at the airport.

Mrs Zaghari-Ratcliffe, wearing a navy blue dress and coat, with a bright yellow shawl and matching bag, waved to the cameras, while Mr Ashoori, carrying a magazine, waved and signed peace.

Ashoori appeared to be taking photos with the pilots in the cockpit of the plane as they waited to disembark.

He could be seen posing with two men through the cabin windows.

Ashoori’s daughter, Elika, shared an emotional live video on Instagram as the couple disembarked from the plane.

Gabriella, Mrs Zaghari-Ratcliffe’s seven-year-old daughter, was heard to ask “is that Mum?” and she yelled “mommy” again as her mother came down the stairs of the plane.

Mr. Ratcliffe shook hands with Mr. Ashoori, while Gabriella seemed to run to her mother, who was just out of reach. He then carried the girl in her arms while they were surrounded by other family members.

Mr. Ashoori was then reunited with his family, who were crying as they hugged. Mrs. Zaghari-Ratcliffe appeared in the video and hugged and kissed her daughter, asking “do I smell good?” her before she take her hands.

He also hugged members of the Ashoori family.

Ms. Zaghari-Ratcliffe was detained for six years after being accused of plotting to overthrow the Iranian government.

Ashoori, who was detained in Evin prison for nearly five years, was charged with espionage. Both have consistently and strongly denied the allegations.

Sharing photos of the flight on Twitter, Stephanie Al-Qaq, director for the Middle East and North Africa at the Foreign Ministry, said there was “relief and joy” when the British-Iranians and officials left Tehran.

While Foreign Secretary Liz Truss, who was also seen in the video of Ms Ashoori awaiting the couple’s arrival, said: “People are in very, very good spirits.”

Speaking on Brize Norton after arrival, he said: “I think it’s been a really tough 48 hours, the expectation that they would be released, but we weren’t sure until the last moment.

“It has been a very emotional, but also a very happy time for the families, and I am pleased to say that both Nazanin and Anoosheh are in good spirits, safe and well here in Britain.”

Asked if Mrs Zaghari-Ratcliffe and Mr Ashoori thanked her after she returned, Mrs Truss said: “Well I thank you and I thank the families for how stoic you have been during this really difficult period. .

“And we talked about the process we’ve been through, the last difficult part of making sure they were able to get out of Iran, but it’s fantastic to welcome them back safely here in Britain.”

A third British detainee, Morad Tahbaz, has been released on parole but remains in Iran.

In a tweet, Truss said she was glad he was released, but that his continued detention was “far from enough.”

He added: “We will continue to work intensively to secure their departure from Iran.”

The release of Ms Zaghari-Ratcliffe and Mr Ashoori follows months of intense diplomatic negotiations between London and Tehran, including the eventual payment of an outstanding £400m debt owed by Britain to the regime.

Earlier, her husband, Richard Ratcliffe, said he was “deeply grateful” for her release and that he and Gabriella were “looking forward to a new life.”

Although she admitted that the family cannot “make up for lost time”, she insisted that they will try to “live in the future” when she returns home.

He added, “The first thing he wanted was for me to make him a cup of tea, so we’ll do that.”

Labor MP Tulip Siddiq said in a tweet, while sharing a photo: “It’s been 6 long years, and I can’t believe I can FINALLY share this photo. Nazanin is now up in the air fleeing 6 years of hell in Iran. My heart goes out to Gabriella and Richard as their long journey home draws closer by the minute. “

The MP shared another image of the mother-of-one on the flight back to the UK: “Nazanin’s plane took off from Oman just over half an hour ago and is due to arrive in the UK tonight. Here she is on the plane, the final step in what has been a six-year ordeal. “

The imprisonment of Ms Zaghari-Ratcliffe and the detention of other British nationals in the country has been linked to a £393.8 million debt Britain owed to Iran for 1,500 Chieftain tanks and armored vehicles, which was canceled by Great Britain in 1979.

After her arrest, she was told that she would only be released when the debt was paid.

She served five years in an Iranian prison and spent the past year on parole at her parents’ home in Tehran for fear she could be sent back to jail at any moment.

On Tuesday, her British passport was returned to her and she was reportedly told that a flight would be “arranged for her” on Wednesday so that she could join her husband Richard and seven-year-old daughter Gabriella in Hampstead.

Nazanin Zaghari-Ratcliffe reunited with his family

Ms Truss said the release of Ms Zaghari-Ratcliffe and Mr Ashoori was due to “years of hard work and dedication” by diplomats and “intense efforts over the last six months”.

“I made resolving the continued detention of British citizens and paying off the IMS debt my top priorities when I took office in September 2021,” he said.

“Last October and November, I sent a team of Foreign Office negotiators to Tehran to secure the release of the detainees.

“Last December, I met with Omani Foreign Minister Badr to secure diplomatic assistance from Oman. We are grateful to our friends in Oman for their support in ensuring the return of our citizens.

“The IMS debt has been settled in full compliance with UK and international sanctions and all legal obligations.”

Tom Tugendhat, Conservative chairman of the House of Commons Foreign Affairs Committee, told the Standard: “This is the most fantastic news. The release of a mother held so brutally for so long would be a fantastic moment.”

Earlier on Wednesday, during a visit to Abu Dhabi, Boris Johnson said negotiations over the release of the charity workers were “all the way through”.

“It is true and has been for a long time that we are negotiating the release of our dual nationals in Tehran,” the prime minister said.

“There are some very sad cases, including Nazanin.”

He detailed “intense” talks to resolve the situation, with a final round of negotiations in Muscat in February resulting in the deal.

Ms Truss said the UK “will continue to press with partners” to secure Morad Tahbaz’s permanent release, noting that it is “a long time ago”.

He added in the Commons: “We will continue to support other British citizens in Iran who have asked for our help.

“We will work closely with our international partners to urge Iran to end its practice of unjust detention. It remains, and has always been, within Iran’s gift to release any British citizen who has been wrongfully detained.

“The agonies suffered by Nazanin, Anoosheh, Morad and their families must never happen again.”

Labor leader Sir Keir Starmer said it was “an incredible moment” for Ms Zaghari-Ratcliffe and her family after an “unimaginable ordeal”.

He added that there would be questions to be answered about “what happened along the way,” but for now his thoughts are with the family.