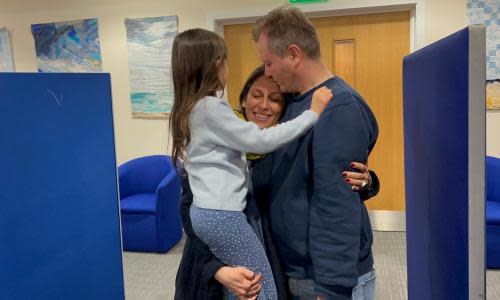 Nazanin Zaghari-Ratcliffe is reunited with her family, hugging and kissing her seven-year-old daughter in emotional scenes at RAF Brize Norton after returning to Britain for the first time since she was detained in Iran six years ago.

Related: ‘Free at last’: what the newspapers say about the release of Nazanin Zaghari-Ratcliffe

Wearing a blue dress and a yellow scarf, the colors of Ukraine, Zaghari-Ratcliffe stepped off a government-chartered flight from Oman at Oxfordshire Air Base in the early hours of Thursday morning.

Joining Zaghari-Ratcliffe, 44, when she was disembarked was fellow British-Iranian Anoosheh Ashoori, 67, who was also released from jail in Iran on Wednesday.

They walked the runway together, waving at photographers, before entering the airport building for a private meeting with their families.

Zaghari-Ratcliffe was seen hugging her daughter, Gabriella, inside the reception building. She carried the girl in her arms as they were surrounded by other family members, including her husband, Richard, who campaigned for years for her release.

Gabriella was heard to ask “Is that mom?” as her mother disembarked from the flight in Brize Norton, according to a video shared on Instagram by Anoosheh Ashoori’s daughter, Elika. Later in the video, Richard Ratcliffe shakes hands with Anoosheh Ashoori, before Ashoori is reunited with her tearful family.

Zaghari-Ratcliffe appears in the video and hugs and kisses her daughter, asking “do I smell good?” before taking her hands. She also hugged members of the Ashoori family.

Elika Ashoori also posted a tweet from the families at the airport, titled “Happiness in a photo.”

exchange photos of the flight on Twitter, Stephanie Al-Qaq, director for the Middle East and North Africa at the Foreign Ministry, said there was “relief and joy” when the British-Iranians and officials left Tehran.

Liz Truss, the British foreign secretary, watched the couple’s arrival from the airport building and tweeted that she was “delighted” that Zaghari-Ratcliffe and Ashoori had returned to the UK.

Zaghari-Ratcliffe and Ashoori, who was held in Evin prison for nearly five years, were charged with plotting to overthrow the Iranian government and spying, respectively.

A third British detainee, Morad Tahbaz, has been released on parole but remains in Iran. All three deny the charges.

Truss said Thursday morning that the government “will continue to work hard” for Tahbaz’s freedom.

As part of negotiations for his release, the UK is understood to have agreed to pay £393.8m owed to Iran after it canceled an order for Chieftain tanks following the ouster of the Shah in the 1979 revolution. agreement were negotiated. in secret talks in February largely in Oman between a British Foreign Office team and the Iranians. With trust between the two countries at a low point, every aspect of the deal, including its choreography, had to be agreed upon.

Zaghari-Ratcliffe and Ashoori were initially brought to the Gulf of Oman state, which has been heavily involved in behind-the-scenes negotiations.

Earlier, Boris Johnson thanked the Oman government for its help in bringing the couple home. Speaking about a visit to Saudi Arabia, the prime minister said: “It is fantastic news that Nazanin is out. I’m also excited for Anoosheh Ashoori and Morad Tahbaz who are also out.

“It has been a lot of work from many people. I want to pay special tribute to her husband Richard. It’s great that she can come back, see her family, see her daughter Gabriella.”

Zaghari-Ratcliffe was detained on security charges by the Iranian Revolutionary Guards at Imam Khomeini Airport after a holiday visit to Iran where she introduced Gabriella to her grandparents. Ashoori was arrested in August 2017 while visiting his elderly mother in Tehran.

In the House of Commons, with Ratcliffe and seven-year-old Gabriella looking on, Liz Truss, the Foreign Secretary, laid out the details of his release.

“It was only when we heard that the wheels were turning in Tehran that we really knew it was happening,” he said.

Tulip Siddiq, who is an MP for Ratcliffe, told ITV’s Peston program how Zaghari-Ratcliffe had been able to return home. The Labor MP said: “She was contacted by the Islamic Revolutionary Guards in Iran over the weekend and asked to come in for questioning, and quite apprehensive, she sent me a message from her before she left. To her complete surprise, at the end of the interrogation, and there were some scare tactics there, she had her British passport returned to her.

“Regarding you haven’t seen your British passport since April 23, 2016. But just as you were about to walk out the door, you were told: ‘Don’t book your own flight, we’ll arrange the flights for you.’ ‘.

“So after that, I had the idea that she would come back, but it’s always a touch and go with these things – we’ve had so many false dawns I wasn’t sure.”

“But the moment she was at the airport, I got a message from Richard Ratcliffe saying that Nazanin was at the airport and, to his surprise, Anosheh, who was the other detainee, was also there. [a] British citizens. We didn’t think he would come home, because he wasn’t under house arrest, he was actually in Evin Prison.”

Former Prime Minister David Cameron, who was number 10 when Zaghari-Ratcliffe was detained in Iran, told Channel 4 News her release was “good news we’ve all been waiting to hear for so long”.

Iran treats Tahbaz, 66, as a US citizen, even though he was born in Hammersmith, west London, and holds US, British and Iranian citizenship. Disagreements over his fate have proven to be an obstacle to a deal in the past.

The Tahbaz family told The Guardian: “The British government has let us down and betrayed us. He was the only one of the three with a British birth certificate and was left behind. We were not told about this arrangement except in a brief phone call with the foreign secretary when it was too late to do anything about it. The British now just say it’s an American problem.”