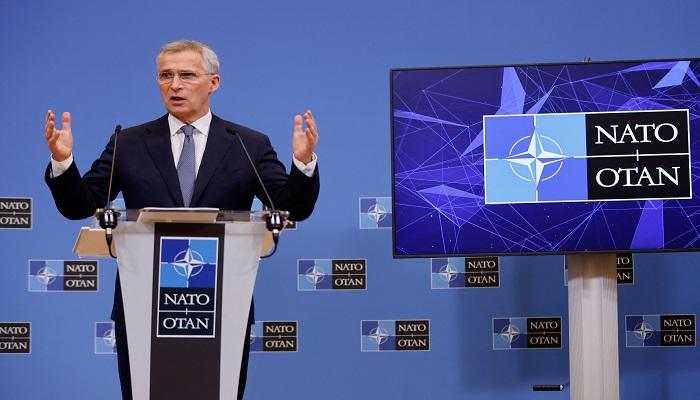 Ukrainian President Volodymyr Zelensky admitted on Tuesday that the door is not open for Ukraine to join NATO.

In a video address, the Ukrainian president said that Ukraine understands that the door is not open for it to join NATO and therefore proposes a way to independently protect itself on the condition of obtaining security guarantees.

“If we cannot enter through open doors, we have to cooperate with entities that we can cooperate with, that help us, protect us … and have separate guarantees,” Zelensky added.

The Ukrainian president pointed out that article 5 of the North Atlantic Treaty “is in its weakest state”, and stressed that Russia is trying to reach the capital, kyiv, to control the entire country.

This comes as NATO Secretary-General Jens Stoltenberg on Tuesday expressed the alliance’s concern that Russia may resort to using chemical weapons in a “fake attack”, which it blames on its opponents, in the context of its attack on Ukraine.

Moscow and kyiv exchange accusations about the possible use of prohibited weapons, while Russia claims that the United States has established centers to develop chemical weapons near its border with Ukraine, which Washington denies, warning of Russian intentions behind these accusations.

“We are concerned that Moscow is orchestrating a ‘fake attack’ in Ukraine, possibly with chemical weapons,” Stoltenberg told a news conference.

He noted that the alliance does not plan to deploy medium-range nuclear missiles in its countries.

As for the Ukrainian measures, the Verkhovna Rada today voted to extend the emergency law for another 30 days, starting from March 26, to approve a bill presented by President Zelensky.

The war in Ukraine began on February 24, when Russian President Vladimir Putin launched what he described as a “special military operation” in the biggest attack on a European country since World War II.