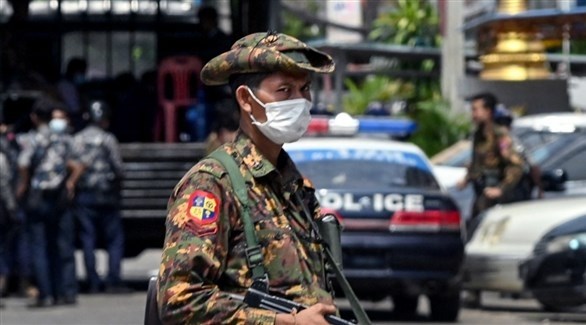 Myanmar’s ruling junta leader Min Aung Hlaing vowed to “annihilate” opponents of the country’s coup, during a parade organized by the army to mark Armed Forces Day, the first anniversary of the violent crackdown. of the pro-democracy protests.

Myanmar has been in chaos since a coup in February 2021, with a crackdown on opponents of military rule resulting in more than 1,700 deaths, according to a local monitoring group.

Clashes are taking place in many parts of the country between Popular Defense Forces fighters, who are often equipped with improvised or makeshift weapons, and military council forces, with analysts saying the army is facing difficulties in dealing with the combatant tactics.

There are also clashes with more organized rebel groups stationed along the borders with Thailand and China.

While presiding over the annual military parade, which featured tanks, missile trucks, artillery pieces and cavalrymen, Min Aung Hlaing assured some 8,000 security personnel that the army would not withdraw.

The commander of the junta said before the start of the Armed Forces Day ceremony in Naypyidaw, the capital built by the army, that the army “will not negotiate any more… and annihilate until the end” the groups fighting for overthrow the government.

Planes flew through the sky in the colors of the Myanmar flag yellow, red and green, while the official media broadcast scenes of women queuing on the roads to greet soldiers with flowers.

In the economic capital, Rangoon, some 12 people staged a protest movement in which they carried torches and chanted slogans against the military council, according to scenes broadcast by social network users.

On social media, others also called on residents to turn off the lights in their homes as part of a nationwide “strike” on Sunday night.

On “Armed Forces Day”, Myanmar celebrates the launch of the resistance to the Japanese occupation during World War II, and a military parade attended by foreign soldiers and diplomats is usually organized on this day.

Last year, while Ming Aung Hlaing attended the parade, her forces violently cracked down on protesters against the coup that toppled the government of civilian leader Aung San Suu Kyi.

That was the bloodiest day of the army’s crackdown on pro-democracy demonstrations, in which some 160 protesters were killed, according to a local monitoring group, and sparked a wave of international condemnation.

The isolation of the junta has worsened, with the list of foreign leaders who have visited the country since the coup restricted to Cambodian Prime Minister Hun Sen.

On Sunday, Min Aung Hlaing accused unnamed “foreign aggressors” of working against the army and called on the armed forces to maintain unity in the face of “internal and external acts of sabotage.”

This year, the Russian deputy defense minister, whose country is a major arms supplier and one of Myanmar’s biggest allies, was scheduled to attend the parade but was unable to attend due to “affairs of his country”, according to the spokesman for the board, Zaw Min. Barrel.

In February, a UN expert on Myanmar said that Russia and China, which are also one of Myanmar’s most important allies, continue to supply the Myanmar military with weapons, including fighter jets and armored vehicles.

The United States, the European Union and several countries, including Australia, Canada, New Zealand and the United Kingdom, called on the Myanmar military to “stop its violence and return Myanmar to the path of democracy.”

The joint statement called on countries around the world to “immediately” stop the sale or supply of weapons and military equipment to Myanmar.