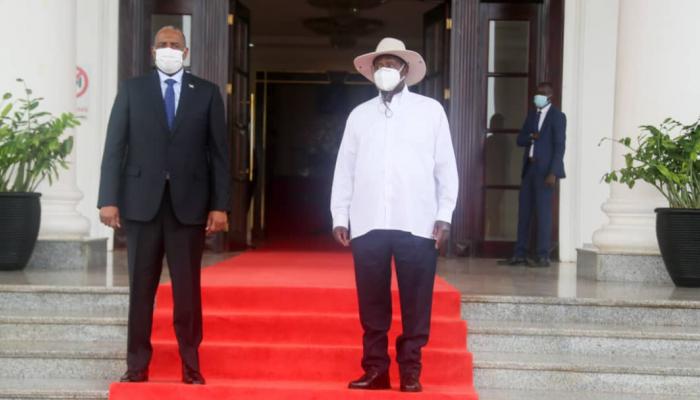 Ugandan President Yoweri Museveni on Thursday urged the Sudanese to engage in a comprehensive dialogue without excluding either side to resolve the political crisis in his country.

Museveni’s invitation came during his meeting with the chairman of the Sudanese Sovereignty Council, Lt. Gen. Abdel Fattah Al-Burhan, at the presidential palace in Kampala, where he arrived on a one-day official visit on Thursday.

According to a statement by the Sudanese Sovereignty Council, Al-Burhan briefed the Ugandan president on the latest developments in the country and his vision to resolve the current political crisis.

Al-Burhan stressed that the solution is through dialogue that includes all colors of the political and national spectrum, leading to consensus and consensus that will be a balm for the political crisis that the country is going through and lay solid foundations for democratic transformation.

For his part, Ugandan President Yoweri Museveni praised, according to the statement, “the astuteness and leadership of the head of the country’s Sovereign Council despite existing internal, regional and international challenges.”

Museveni recommended to the president of the Sovereign Council that no party should be excluded from the political process inside Sudan and that the government should be made up of independent technocrats to manage the rest of the transition period with complete impartiality.

He called on all Sudanese political and national actors to engage in comprehensive dialogue leading to satisfactory and urgent solutions, noting that “elections are the solution for the country to come out of its crisis.”

In Sudan, there has been a protest movement since the decisions of the army chief issued on October 25, which dismissed the transitional government, imposed a state of emergency in the country and suspended some provisions of the constitutional document.

Since then, Sudan has been mired in political turmoil, amid efforts led by the United Nations, through its mission in Khartoum, “UNITAMS”, and the African Union to resolve the current crisis.

Al-Burhan and Museveni’s meeting addressed the peace agreement in South Sudan and the challenges for its implementation, emphasizing the role of Sudan and Uganda to work together to resolve all the challenges they face as guarantors of the agreement.

The two sides discussed regional and international issues of common interest, emphasizing the need for bilateral cooperation in the economic, political and military fields, coordinating common positions and working together through bilateral channels and regional organizations.

From Uganda, Al-Burhan arrived in South Sudan on a two-day official visit and was received at Juba International Airport by President Salva Kiir Mayardit.

According to a statement from the Sovereign Council of Sudan, the visit will promote ways to support and develop bilateral relations between the two countries, as well as discuss the challenges facing the implementation of the revitalizing agreement for peace in the State of South Sudan.