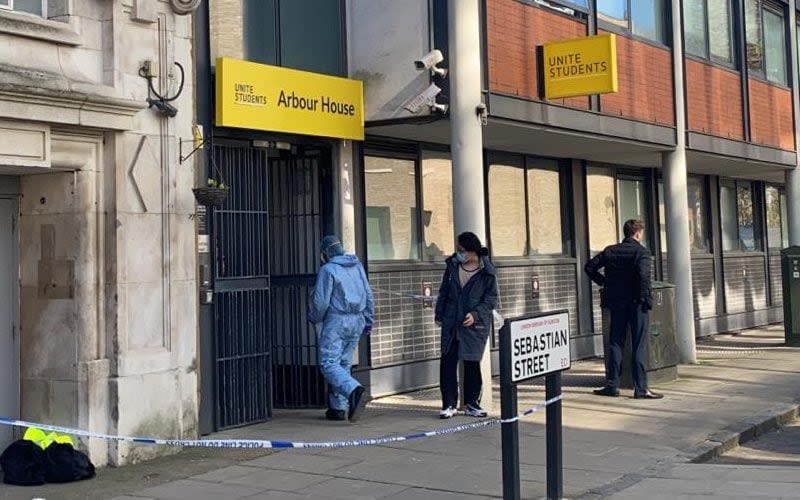 A teenager has been found dead in university accommodation in London, while a murder investigation is launched.

Police were called around 5:10 a.m. Saturday to the Arbor House student residences on Sebastian Street in Clerkenwell.

They found a seriously injured 19-year-old woman who was pronounced dead at the scene. It is not yet clear what injuries she sustained, and she will undergo a post-mortem examination. No arrests have been made.

The teenager, who has not yet been formally identified, is understood to have lived on the top floor of the six-storey block. The students who lived in the accommodation said that he was studying psychology at the City, University of London.

One resident, a 21-year-old business student, reported hearing the fire alarm early Saturday morning and then the sound of someone running out the ground floor exit.

Leona Sigmud, 20, a music student who also lives at the Arbor House, said: “I saw her in the corridors but never really spoke to her. I don’t think she was British.”

“When I heard it, I didn’t believe it at first. We were all quite shocked.”

The Metropolitan Police Specialist Crime Command is leading the investigation into the murder and is asking anyone with information to come forward.

Speaking at Islington Police Station, Chief Inspector Adam Instone said: “We are working to ensure that the woman’s family have been made aware of this tragic news and that the Met supports them in the unimaginably difficult days and months ahead.” .

“Arbor House is student accommodation and I know there will be great sadness and deep concern among the local population and the student community.

“I share that sadness and concern and can assure you that a thorough homicide investigation is underway, led by skilled and experienced detectives who will work tirelessly to identify and arrest those responsible.”

Unite Students, which owns and operates the Arbor House, said it was working closely with police and the City University of London.

The university said it was fully supporting the police investigation and working closely with Unite Students.

You can also provide information anonymously via the independent charity Crimestoppers on 0800 555 111.