“Moroccan-Spanish friendship” in El Clásico… What is the truth of the poster? 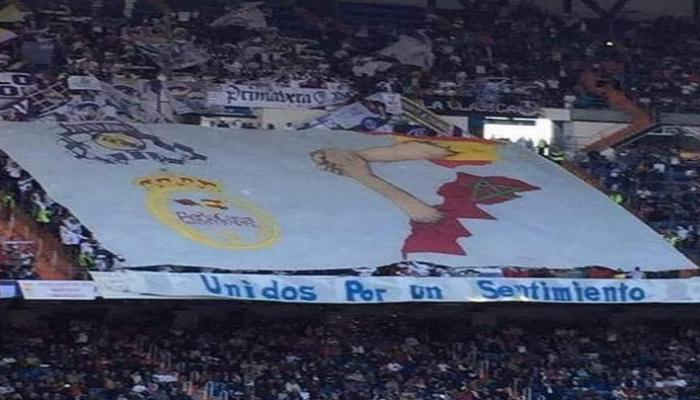 Days after the Spanish government announced its support for Rabat’s position on the Western Sahara issue, ending a major diplomatic dispute between the two countries, an image was spread on social media that its editors claimed was a sign of Moroccan-Spanish friendship.

The image circulated as if it was posed at the El Clásico match between Real Madrid and host Barcelona at the Spanish capital’s Santiago Bernabéu stadium on Sunday, but the image was taken in 2015, according to the French news agency.

The image shows crowds holding a banner with what appears to be an interlocking of two fists, one of which is linked to a map of the Kingdom of Morocco and the other to the flag of Spain.

And the accompanying comment said: “Last night, in the Clásico, a giant Tifo (banner) was hoisted on the map of the Kingdom of Morocco, as an expression of Moroccan-Spanish friendship, in the heart of the Bernabéu, the bastion of the Real Madrid”.

The spread of the image, which garnered hundreds of posts on Facebook and Twitter, began after the Spanish government announced on March 18 a fundamental change in its position on the Western Sahara issue by publicly supporting Rabat’s position for the first time. , ending a major diplomatic dispute between the two countries.

“Spain considers the autonomy initiative presented in 2007 (by Morocco) as the most serious, realistic and credible basis to resolve this conflict” between Rabat and the Polisario Front, Spanish Foreign Minister José Manuel Alparis told reporters in Barcelona. .

The crisis in the Moroccan Sahara began after the Spanish colonial withdrawal from the region in 1975, when the dispute between Morocco and the Polisario turned into an armed conflict, before the two parties signed a ceasefire agreement in 1991, amid for growing international support for the Moroccan Sahara and for the serious efforts made by Rabat to resolve the conflict.

However, the photo was not taken during the El Clásico match between Real Madrid and its guest Barcelona at the Santiago Bernabéu stadium in the Spanish capital on Sunday, March 20, and ended with the Catalan club winning 4-0.

The search through search engines showed that it was published in 2015 on Moroccan websites, which indicates that members of the Real Madrid supporters’ club in Casablanca raised a giant banner during a match between their club and Malaga at the Santiago Bernabéu stadium in La Spanish capital.

In fact, you can find a video posted on the official YouTube channel of the Real Madrid Club on April 20, 2015, showing the banner from a different angle.