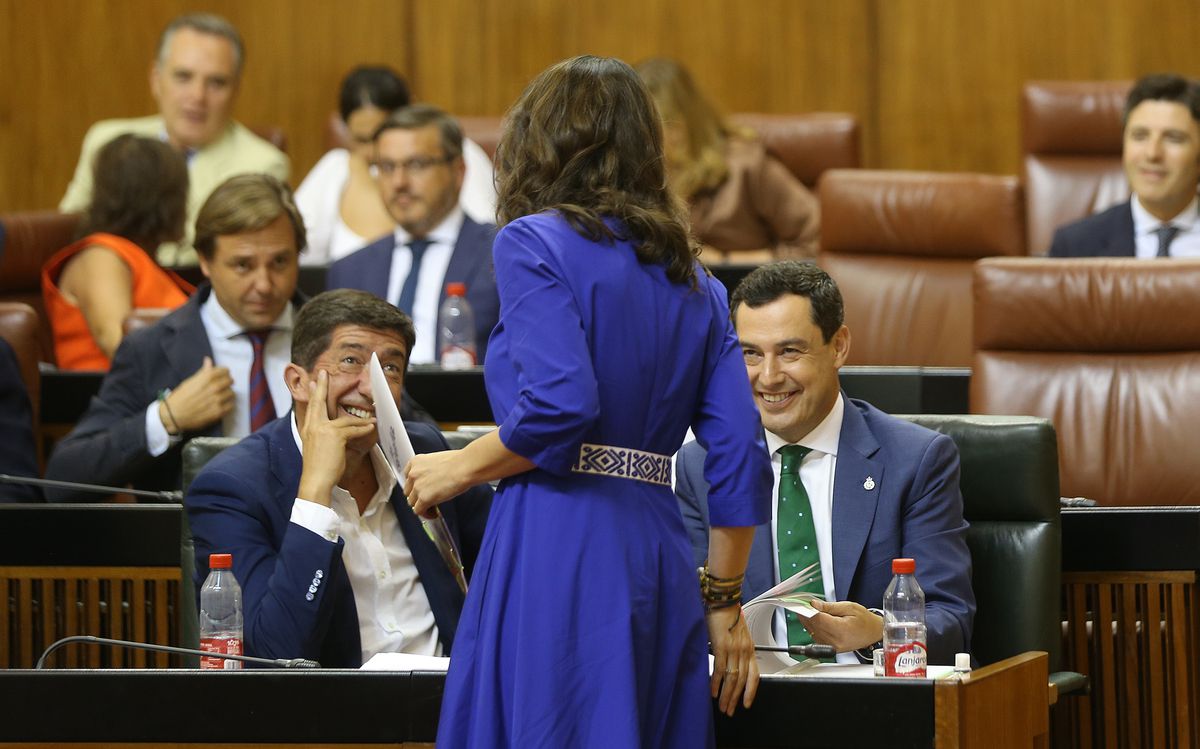 The only candidate for the presidency of the Junta de Andalucía, Juan Manuel Moreno, has hardly been troubled by the reactions of the spokesmen of the groups Adelante Andalucía, Teresa Rodríguez, Por Andalucía, Inmaculada Nieto and Vox, Macarena Olona ​​to the investiture speech, which he held on Wednesday. And although the tone of Moreno – whose party won an absolute majority in June’s elections – was friendly to everyone, he was much more forceful in his reaction to the intervention of the leader of the far-right formation, who did so, Moreno pointed out that without this party he would not have become president, only to then reproach him that “change was not an option”. “Change has left the outcasts of the earth behind,” stresses Olona, ​​who has asked him for an urgent package of measures to deal with the inflationary crisis.

Moreno has attacked Vox’s position at the end of the legislature since the beginning of his speech, reminding him that his party, for electoral interests, did not approve the 2022 budgets, which are “the best package of measures to protect families”. “When a political party is no longer useful, and calculations and electoral ambitions are stronger than the interests of citizens, the political party ends,” the popular leader warned him, recalling that Vox was tempted “to replace the PP.” In this vein, Moreno has also warned against the temptation of some groups to “look for a headline with a big phrase”. “Let’s make a useful policy towards the opponent,” he hinted.

Vox’s role in the Andalusian Parliament is very different from that of the previous legislature, although it bets on a candidate like Macarena Olona who leaves no one indifferent. The PP’s absolute majority makes the votes of the 14 far-right MPs unnecessary for passing legislation, although they may be needed for matters requiring reinforced majorities. You also cannot mark the rhythms or the agenda. No more pulling the rope to get more transfers. And although both Olona and Moreno have been open to agreements, two electoral calls – municipal and general – are looming on the horizon, with PP and Vox competing for the same voting seat.

After lauding Vox’s 2018 break-in in the Andalusian parliament, Olona criticized some aspects of Moreno’s speech. Her main accusation is that she did not put an end to the “mammoth parallel administration” in order, in her opinion, “to preserve social peace”. His other criticism was to belittle him for never having spoken of a recession amid what the Vox boss has defined as “the dark night yet to come.” In both cases, the candidate for the chairmanship of the supervisory board accuses him of ignorance. Moreno has reminded them that what they refer to as “chiringuitos” – a statement the PP signed when it was in opposition – carry out essential public works on issues of health, culture or education. “Exaggerated phrases make water in the end. We need realism and rigor.” Regarding the recession, Moreno has acknowledged that he wants to avoid using that word “because it helps slow down the economy and breed social pessimism.” “I don’t want to see a recession here or in Spain,” he said.

Olona has not given up his role as a whipping spokesman against the Socialists, whose leadership he sharply criticizes as if he were standing in the tribune of the Chamber of Deputies. The Vox spokeswoman did not reveal the meaning of her vote this afternoon, and while she has told Moreno that she can count on her faction’s “outstretched hand” to help the middle class, she has conditioned him to build bridges with the left cancel. “There is no point in managing the legacy that has been preserved if you abandon the cultural struggle,” the spokeswoman concluded after defending Vox’s principles in favor of defending borders and opposing gender equality or abortion.

The left questions the liberal model for solving Andalusia’s problems

If, in his investiture speech, Moreno posited himself as a president who would use his absolute majority – “new majority” as he calls it – to “represent and work for each and every one of the 8.5 million Andalusians, without distinctions or exceptions ”, the speakers of the two left-wing coalitions, Teresa Rodríguez, first, for the Adelante Andalucía mixed faction, and Inmaculada Nieto, second, representative of Por Andalucía, made it clear to her that there is a gulf between the vision of the problems that the Community has and most importantly about the solutions to solve them.

Both have acknowledged Moreno for opting for dialogue rather than applying the role of absolute majority – “out of dissent, we can reach robust agreements,” Nieto has stressed – to criticize the tax cut announced the day before by the popular leader , have questioned the situation of public health – which, given the loss of quality due to saturation, forces citizens to take out private insurance, have agreed –, have criticized the new funding model for public universities and called for attention to reducing queues in educational centers when the birth rate is falling. Both Rodríguez and Nieto have warned of the weight of the tourism sector in the community’s GDP and called for “diversification” to avoid “continued underdevelopment”, in the words of the President of Adelante Andalucía, alluding to the precarious jobs it generates and the consequences caused by tourist overcrowding in city centers.

Rodríguez, who was the first to intervene in the second session of the investiture debate in which the opposition groups responded to the PP’s candidate for the presidency of the Board of Directors, first defended the eminently Andalusian character of his party, recalling that its two representatives are the only ones who do not have guardianship from Madrid. “The voice of two is worth more than the silence of 107. They will take their dose of Andalusism,” the left leader said. Rodríguez reminded Moreno that “you cannot govern for everyone because there are different interests in society”. “He will be the president of SMEs or multinationals, the president of small companies or multinationals, the president of public health users or the 25% who go into private health care.”

In her usual calm tone, Nieto Moreno has requested a monographic debate to address the problems that the war in Ukraine is causing in the economy of Andalusian families and small businesses and has asked him to bring a law to the Chamber concrete actions.

In his reply, Moreno defends the tax cut policy and his liberal management model as the most effective to solve the problems faced by Andalusians. “If the situation was that bad, the Andalusians would not have put their trust in us because they are not stupid.” “The ideological and somewhat poetic vision is fine, but another thing is the harsh reality and the harsh reality requires pragmatism ‘ he replied to Rodríguez, only to later insist to Nieto that he was ‘not going to give up the autonomy of Andalusia on fiscal matters’.