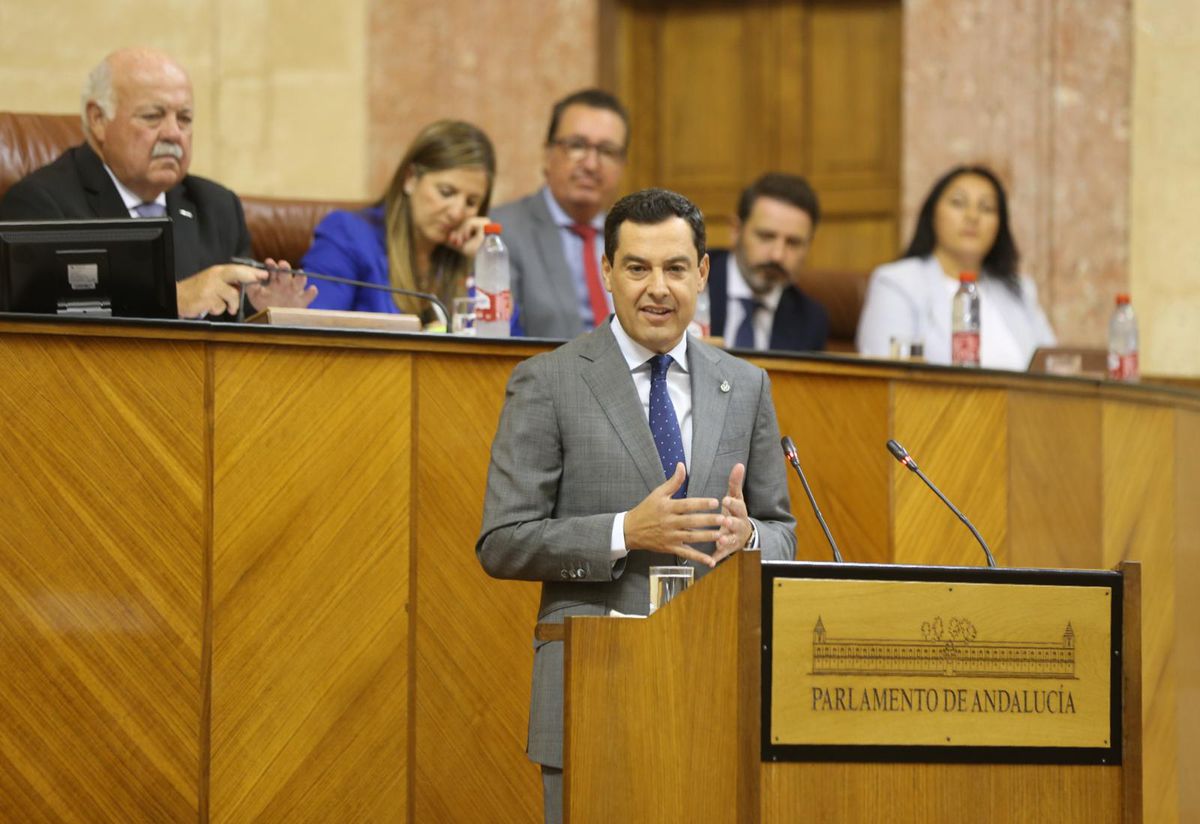 In his inauguration speech today, the leader of the popular Andalusians, Juan Manuel Moreno, promised a further tax cut in Andalusia, which according to his calculations will mean fiscal costs of 620 million euros in the regional budgets for the entire legislative period. Moreno has left behind the epic and socialist legacy of his first election as chief executive in January 2019. It was then that the political messages of democratic renewal took hold after making the political transition after nearly 37 consecutive years of socialist governments. The leader of the PP is no longer new and opens the legislature without having to count on other factions because he has an absolute majority.

Moreno is aware that part of his overwhelming absolute majority is at the expense of the borrowed votes and he recognized this right at the beginning of his speech: “I’m aware of the enormous trust that the Andalusians have in me, that forces me to do it first to interpret intelligence and success. Knowing that it comes from very different sensitivities that have their meeting point in the desire to move towards the future.”

The tax cut will continue to be one of the main lines of the future Moreno government, as it was in the last legislature when it kept inheritance and gift taxes to a minimum, deductions in the regional section of the IRPF and in Transfer Tax Patrimonial and Documented Legal Acts (ITPAJD).

Now, before Parliament on the first day of the investiture debate, he has promised a new twist for the next four years: he will abolish the collection of the water fee that all Andalusians pay on their bill, with an impact of 140 million; will deflate the personal income tax rate in the first three income brackets “so that inflation-related wage increases do not lead to higher tax payments”, at a cost of 70 million; and will increase the amounts exempt from income tax in the regional section to “encourage family income, birth rates and people with disabilities”, which will mean 50 million euros less annually for the Andalusian coffers.

The popular leader’s argument is that these measures will have a direct impact on the pockets of citizens who are being bothered by the price hike. “We are now facing a new pandemic called inflation,” he said. In his opinion, this new fiscal package means “an oxygen balloon for families of at least 260 million additional euros” in 2013 and 620 million in the legislature.

But while he lowers the municipality’s own income through taxes, Moreno is asking Prime Minister Pedro Sánchez to reform the financing model in order to receive more money or at least a transition fund until an agreement is reached. This will be set out at the meeting, both of which will be held on Thursday next week.

Moreno has claimed his new status in the Spanish political landscape with the support of an absolute majority in the former PSOE polling barn, and has appealed to this situation to ask Sánchez to change bilateral relations between the central government and the Andalusian government. “I am confident that the new majority in Andalusia will usher in a new era. A new relationship with Mr. Sánchez’s government, based on dialogue, respect and loyalty,” Moreno has indicated, warning that this loyalty “cannot be punished with renunciation or contempt.”

In this context, the leader of the people confirmed that at his next meeting in La Moncloa on July 28th, in addition to the reform of the financing model, he would ask him to be more considerate of the distribution of European funds and to streamline investments in this community. “Andalusia wants to compete on an equal footing. Not to be different or to gain privilege,” he has implied.

Throughout his speech, Moreno has questioned the Spanish government, and in his criticism of the new PAC he has been most aggressive towards the Sánchez executive, which he has called “the immediate postponement of the entry into force of the eco scheme of the future Common Agricultural Policy”. Moreno has fought for the voice of the rural world and farmers, who have demonstrated massively in Andalusia against the reorganization of these European funds.

water revolution and plan to boost the birth rate

In his speech, in addition to the economic measures, Moreno wanted to highlight his commitment to the environment, which has been strongly questioned by environmental groups during this legislature, and to the green revolution he announced four years ago, this year he has added the water revolution, as part of his commitment to make his next mandate water. However, the investiture candidate watered down one of his star proposals from the previous legislature, which was flatly rejected by UNESCO; the European Union and the central government: the decree regularizing 1,700 hectares of irrigated land in the Doñana wetland. Moreno only hinted that his future government “will seek a definitive, clear and legal solution for the peasants of the Northern Crown of Doñana. We believe that inaction is not the way to solve a problem that has been entrenched for too many years.”

This controversial legislative decree was left in the inkpot with the election push, as was the Circular Economy Act, another of the projects Moreno was personally involved in. He mentioned this and said it will be one of the first to be brought to Parliament in September.

Moreno also included in his speech social measures in line with his party’s conservative ideology, announcing an Andalusian Birth Plan to be included as a specific line in the Andalusian Family Plan and which is part of his government’s contribution to “Impulse the Birth Rate”, “because Andalusia cannot escape the response to the demographic challenge of our society”. This plan will be the first step for family law in Andalusia, the popular leader has stressed.

Popular leader Moreno has also promised to strengthen public services related to health, education and addiction. And he supported the proposal made by socialist Juan Espadas during the election campaign that Andalusians should be able to see their doctor within a maximum of 48 hours. Moreno has stressed the need for a major reform of the primary care model, months after a primary care plan was introduced that included the figure of admissions counseling, in which nurses determined whether the patients who came without an appointment needed care from a doctor or not, in order to to shorten waiting times. This initiative, which was not agreed with the professionals and rejected, has not helped to alleviate the saturation problems in the health centers. The popular leader has also promised to involve 300 mental health professionals, mostly in health centers.

The maximum waiting time of 48 hours is not the only proposal adopted by the PSOE. Moreno has also announced a package of measures to boost youth employment, which was one of the first initiatives Espadas promised if he came to the board. The popular leader has promised to introduce start-up subsidies for those under 35 or subsidies for hiring the first worker.

Moreno was barely interrupted by his bank’s applause during his speech, which lasted just over an hour. Alongside the incumbent CEO, another politician who garnered the greatest applause was incumbent vice president Juan Marín, who was thanked for his work by the popular leader and who was lovingly sacked by local MPs.

The opposition has criticized Moreno’s complacency

The leader of the opposition, Socialist Juan Espadas, has questioned Moreno’s moderation in the speech, which he described as “presidential in tone” and with an “absolute majority”. Swords criticized “the lack of a diagnosis” in his speech. The President of Por Andalucía, Inmaculada Nieto, also “failed to take concrete measures” and made it ugly that the intervention of the incumbent CEO “lacked concrete measures”. Vox’s spokeswoman in the Andalusian Parliament, Macarena Olona, ​​has accused him of a lack of ambition in his economic and social proposals. “Andalusia has not a second to lose” and has chosen to open the social dialogue to new actors. Olona has not revealed the importance of his vote at this Thursday’s investiture, which would decide the formation’s national leadership.

Previous articleAfter Hummel’s flirtation: Céline Bethmann appears hand in hand with HIM on the red carpet
Next articleNord Stream 1: gas should flow again from Thursday