More than 400 children and young people from Ukraine arrived 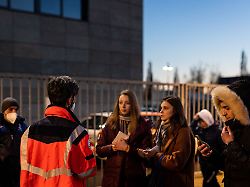 Hannover (dpa/lni) – More than 400 children and young people fleeing the war in Ukraine have so far been accommodated in accommodation at the Hannover fairgrounds. The aides have a particular focus on their needs, Hanover Mayor Belit Onay said Monday. “Of course, security, accommodation, medical care and food are urgent,” the green politician emphasized. But it’s also about counseling, employment, education and “for children, above all, play and fun,” he said. “These young people have lived through terrible things. We hope they can calm down and be kids.”

As of March 16, 55 students from Ukraine had been placed in Hannover schools, the state capital announced. The number of students who were directly admitted by the schools is not yet clear. Of a total of 25,220 places in Hanover’s nurseries, around 1,250 are vacant, which is mainly due to the corona pandemic and cannot be equated with vacancies.

Offers for children and young people have been created at the fairgrounds. Painting, crafts and games are very popular among children, while young people are especially interested in physical activity. Low-threshold language and apprenticeship offers have been arranged, as well as first language and integration courses: teachers with Ukrainian as their mother tongue are available. So far, no unaccompanied refugee minors have been housed in the exhibition halls, said Rita Maria Rzyski, head of the education, youth and family department.

Onay has underlined: “We see that we are facing a task for society as a whole. We don’t know how many people in what age groups will come to us and we also have to make a record of the people who have found private accommodation”. In this situation, the city – like all municipalities – “urgently depends on the support of the federal and state governments.”