More soldiers, more joint weapons projects: how the EU is reacting to the war in Ukraine 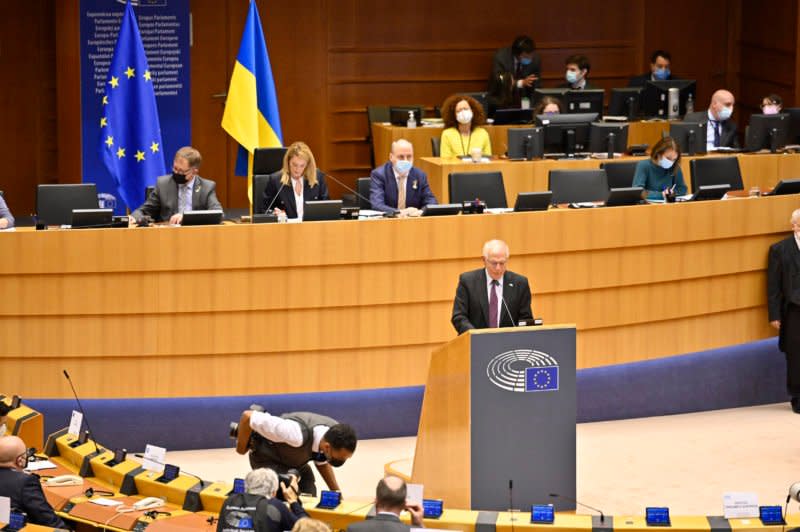 Foreign and defense ministers met in Brussels on Monday to discuss a new security policy concept for the European Union (EU). It was unanimously adopted as a new “strategic compass” and defines the capabilities that the Union must have in managing future crises.

The strategy’s author, EU foreign policy chief Josep Borrell, said: “It is not the answer to the Ukraine war, but part of the answer.” Because NATO remains “the base of the collective defense of its members.” However, the war in Ukraine is a kind of “wake-up call” for the EU.

According to this, the EU should have a task force of 5,000 soldiers ready by 2025. According to Defense Minister Christiane Lambrecht (SPD), Germany should also contribute a large number of soldiers. After all, this is the “military heart” of the concept. The task forces must include ground troops and also air and sea forces to have different “modules” that can be combined with each other. Deployment scenarios could be, for example, intervening in an armed conflict, evacuating people, or securing an airport.

The EU already has its own military troops, the so-called “EU battle groups”. They are made up of 1,500 soldiers who are deployed every six months by a different member state. However, recently there have been problems in gathering the number of soldiers. The new concept emphasizes that the mobility of the European armed forces must be “urgently” improved. Existing EU battlegroups will become powerful crisis response forces that can be deployed at short notice.

Another important element of the new concept is the expanded cooperation in the defense industry between EU countries. Because joint weapons projects between member states should become the new norm, like the “Eurofighter” of Germany, Italy, Spain and then-EU member Britain. In order to create incentives for this, the EU proposes to exempt such projects from VAT. In addition, joint space and cyber capabilities, as well as special forces and strategic airlift capabilities, will be expanded and made available.

The aim of the new defense policy line is also to make military action in the EU context more flexible and less complicated. For example, the use of Article 44 of the EU Treaty, which has never been used before, should be made easier. In addition, coalitions of people willing for a military operation could be formed. According to Borrell, there will also be EU military exercises for the first time.

Borrell had already presented last November the concept of security policy to specify a common defense policy for the Union. At the time, however, he still had to be ready for a compromise, as Eastern European countries feared a strengthening of the EU at NATO’s expense. The war started in Europe on the EU border has now mobilized support for the new strategic compass from all member states.

The Ukrainian war also changed the wording of the concept once again. Consequently, Russian actions represent “a serious threat to the European security order and European citizens” and the EU must now also deal with nuclear threats. In addition, a sentence intended to allow cooperation with Moscow in selected subject areas was deleted without replacement.

The gas supply for the coming winter must be assured

In addition to a common defense policy, the EU’s plan for compulsory gas reserves was also specified. The EU Commission has taken additional steps to this end. Under a bill, member states must ensure that their gas storage facilities are at least 90 percent full by November 1 each year. Intermediate states will also be established, which will be controlled at EU level. The bill is expected to be officially introduced on Wednesday.

“Given that at any time there may be interruptions in the supply of gas through the pipeline, measures must be taken to ensure that the storage tanks of the Union are full in order to ensure supply for the winter of 2022/2023,” he says. the draft regarding the war in Ukraine and a possible freeze on Russian gas supplies.

In the future, EU countries will have influence over operators of gas storage facilities through compulsory licences. This is to ensure that they do not jeopardize the energy supply in an EU country. For example, the Russian state-owned company Gazprom was accused of intentionally underfilling its storage tanks; this should be avoided in the future. In Germany, for example, Gazprom operates several gas storage facilities.