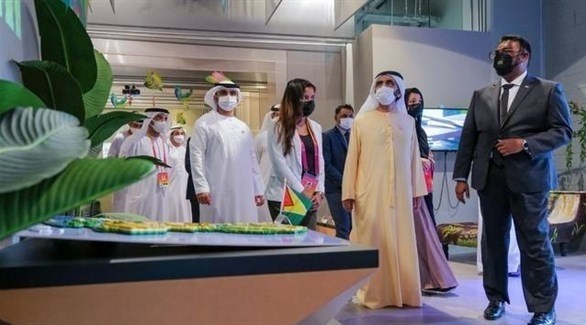 The Vice President, Prime Minister and Ruler of Dubai, Sheikh Mohammed bin Rashid Al Maktoum, met today at Expo 2020 Dubai, the President of Namibia, Hague Geingob, and the President of Guyana, Muhammad Irfan Ali, as part of a tour of the main countries of the world. event, where he also visited the pavilions of Palestine and Austria, and Colombia.

Sheikh Mohammed bin Rashid Al Maktoum and the President of Namibia reviewed the general bilateral relations between the two countries and the common desire to promote them by discovering more opportunities for association, since these ties represent new bridges to strengthen cooperation between the Gulf region and Africa in general, which contributes to increasing the volume of investment and trade, as well as exchanging experiences in various fields of development of common interest.

During his visit, President Heig Geingob was informed at the Namibian pavilion about the characteristics that this West African country offers on the Atlantic coasts of life in the African country, rich in its vast natural environment, and information about its cultural richness. And social. , as well as the economic opportunities it enjoys based on Its lands are rich in natural resources and mineral wealth, while Namibia promotes its capabilities in tourism and the blue economy, and the infrastructure projects it implements, as well as its productive human and qualified energy.

Likewise, Sheikh Mohammed bin Rashid Al Maktoum met with the President of Guyana, Muhammad Irfan Ali, in his country’s pavilion at Expo 2020 Dubai, where he welcomed the participation of the friendly country in the event that brings the world together in Dubai, and as part of Guyana’s first participation in the Expo with an independent pavilion, highlighting the value of this participation in discovering new areas of cooperation between the two countries, while the Expo in general represents a platform from which the world embarks in a new stage of cooperation and coordination to create a better world, full of opportunities and free of challenges.

He then explained what the pavilion includes and what distinguishes Guyana, a pioneer of ecotourism, and what it shows about its green development strategy, a path towards sustainable and comprehensive development, and its economic components that prompted the International Monetary Fund to place it among the countries fastest growing in 2021.

Muhammad Irfan Ali expressed his country’s high appreciation for the inspiring development model put forward by the UAE, which has been able to rise to advanced ranks in many indicators of global competitiveness, wishing the UAE and its honorable people all progress and prosperity.

Sheikh Mohammed bin Rashid Al Maktoum then visited several pavilions at the Expo, including the Palestine Pavilion in the “Opportunities” area, whose design and content reflect the authenticity of Palestinian culture, heritage and history. The pavilion offers an integrated overview of the most important and prominent landmarks of Palestine, especially Jerusalem, what distinguishes Palestine from traditional and modern industries, the prosperity of the tourism sector and the promising investment opportunities it offers.

He toured the pavilion, which bears the slogan “a land rooted in history and embraces tourism and investment”, where he was briefed on its distinctive content and design that simulates traditional Palestinian streets, while the floor of the pavilion was covered inside your outdoor patio. with the famous Palestinian stones with all their originality.

During the visit, Sheikh Mohammed bin Rashid Al Maktoum viewed some of the exhibits reflecting ancient Palestinian history, including collectibles and exhibits brought from different regions of Palestine, including part of the original mosaic panel in Jericho, which is the most big of its kind. in the world since the Umayyad era, and the Dead Sea salt is rich in useful minerals, glass and ceramic products, the historical industries for which the city of Hebron was famous, while the “Al-Edrak” station in the pavilion offers a virtual tour of the most important attractions in Palestine.

He expressed his admiration for what he saw in the content pavilion that talks about the ancient history of Palestine and highlights its efforts in the field of self-development and economic resources, expressing his sincere wishes to the brotherly Palestinian people for a future full of stability, prosperity , development and growth.

Sheikh Mohammed bin Rashid Al Maktoum also visited the Austrian Pavilion, which is distinguished by its unique design, with 38 conical towers, in an expression of the mix between Austrian climate technology and traditional construction, which has characterized it for thousands of years. years and that mimics the idea of ​​traditional boilers, where conical shapes are used in construction to cool buildings, without the need for air conditioners, which helps save around 70% of energy, in pursuit of a better future and more sustainable.

Further emphasizing the idea of ​​sustainability, the Austrian Pavilion building was constructed from raw materials such as earth, silt, and sand, while the pavilion also showcases the great scientific and technological progress in Austria, which is reviewed in the next section. . the title “iLab”, presenting an innovative set of ideas, creations and solutions through which Austria seeks to achieve a better tomorrow.

Sheikh Mohammed bin Rashid Al Maktoum’s tour of the Expo also included a visit to the Colombian Pavilion, in the “Opportunities” area, which is distinguished by its transparent design that allows viewing from various angles and corners, and which expresses the openness and Colombian transparency, while the pavilion celebrates the ancient culture of this South American country, especially with its unique musical rhythms.

Hear how the pavilion celebrates the great contrasts of Colombia, combining modern and vibrant cities rich in innovation and business opportunities, while at the same time enjoying pristine nature, snow-capped mountain peaks, vast expanses of bodies of water, forests, high plains and deserts.