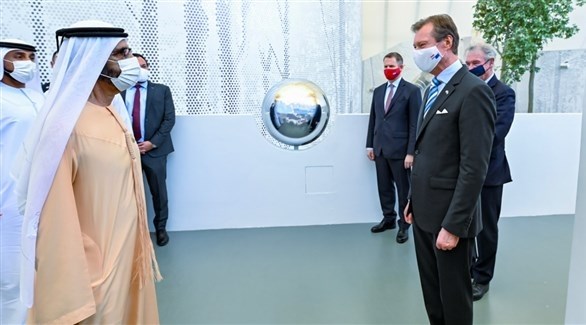 UAE Vice President and Prime Minister and Ruler of Dubai, Sheikh Mohammed bin Rashid Al Maktoum, met with Henri, Grand Duke of Luxembourg, who is currently visiting the country to participate in his country’s National Day celebrations at the Expo 2020 from Dubai.

Sheikh Mohammed bin Rashid Al Maktoum welcomed Duke Henry, stressing the depth of relations between the Emirates and Luxembourg, and the importance of supporting and strengthening them to achieve the mutual interests of the two countries and peoples.

During his visit to the Luxembourg Pavilion, Sheikh Mohammed bin Rashid Al Maktoum learned about the complete panorama that the pavilion offers about this thousand-year-old European country, and summarizes his experience towards the future through five main sections that include diversity, sustainability, communication, beauty and initiative, reflecting the components of Luxembourg and its vision for the future, especially in the areas of transport, communication, infrastructure and sustainable development.

During the visit, the Vice President also met with Estonian President Alar Karis at his country’s pavilion at the Expo 2020 Dubai venue, where he affirmed the UAE’s enthusiasm for building cooperation and friendship with all countries to achieve the common interests of their people and the peoples of the countries.

He spoke highly of the relations between the UAE and Estonia, and the existing cooperation between the two countries in many fields, especially in the areas of e-government and digital economy, expressing his hope that the next stage will see further cooperation between the two countries. at all levels, especially in vital sectors, including the industry of the future, electronic services and other modern fields of common interest.

For his part, the Estonian president highlighted the relations of friendship and cooperation between his country and the UAE, expressing his aspiration to develop them to reach new horizons that contribute, in its broader framework, to widening the circle of cooperation between the two countries. in various fields, praising Dubai’s distinguished organization of the current World Expo session, which contributed significantly to strengthening international cooperation frameworks to reach broader horizons.