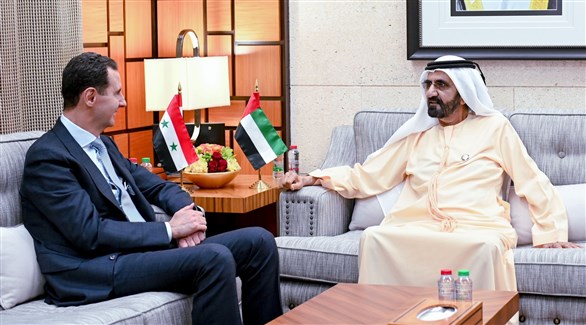 The Vice President, Prime Minister and Ruler of Dubai received the President of the sister Syrian Arab Republic, Bashar al-Assad, on his break at Al Marmoom in Dubai on Friday. During the meeting, Sheikh Mohammed bin Rashid Al Maktoum welcomed the visit of President Bashar al-Assad and the accompanying delegation, which takes place within the framework of fraternal relations between the two countries, expressing his sincere wishes for Sister Syria and her honorable people. that security and peace prevail in all its parts and that it and the region as a whole have the elements of stability and prosperity for the benefit of all, good and growth.

During the meeting, which took place at the Beach Palace, Sheikh Mohammed bin Zayed welcomed the visit of the Syrian president, which is part of the common concern to continue consultation and fraternal coordination between the two countries on various issues, expressing his wishes that this visit would be a good start, peace and stability for sister Syria and the entire region.

Sheikh Mohammed bin Zayed was briefed by President Bashar al-Assad on the latest developments and developments in the Syrian arena.

The two sides discussed brotherly relations, cooperation and joint coordination between the two sister countries to achieve their mutual interests and contribute to the consolidation of security, stability and peace in the Arab region and the Middle East.

During the meeting, the two sides discussed a series of issues of common interest, emphasizing the preservation of Syria’s territorial integrity and the withdrawal of foreign forces, as well as political and humanitarian support for Syria and its sister people to achieve a peaceful solution. to all the challenges you face.

Sheikh Mohammed bin Zayed Al Nahyan stressed that sisterly Syria is a fundamental pillar of Arab security and the UAE wishes to strengthen cooperation with it to achieve the brotherly Syrian people’s aspirations for stability and development.

They also exchanged views and the positions of the two countries on all regional and international issues and developments of common interest.

President Bashar al-Assad arrived in the country earlier, where he was greeted upon arrival at Dubai International Airport by Deputy Prime Minister and Minister for Presidential Affairs Sheikh Mansour bin Zayed Al Nahyan.