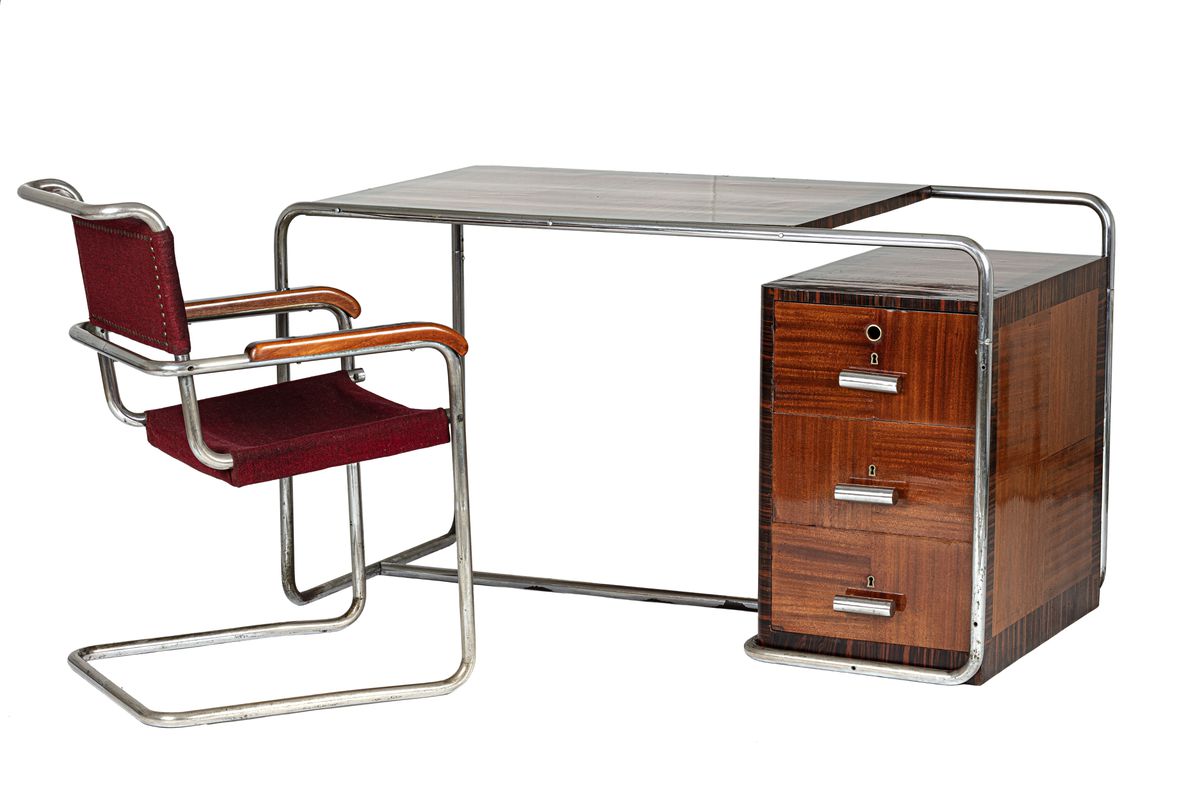 On Madrid’s Gran Vía, above the Chicote bar, the most famous Spanish modern furniture company had set up its showroom, very close to the fashion house of a famous designer and businesswoman, Margarita Lacoma, to whom the residential colony owes its name. This happened before the war, when the cheerful avant-garde had already established itself as an institutional style and also as a mark of distinction between individuals, among whom a very silly joke became fashionable. From now on – so it was said in the salons, on reception days – Rolaco is Rolacó because Lacoma is on top. Tubular metal furniture reached flagship rank. To manufacture them, the Rolaco company merged with Muebles de Acero Curvado (MAC), which had been their competitor and had signed a contract with Mies van der Rohe to reproduce their designs (it seems that Mies himself went to Madrid to to make the box). . . .

The application of tubular steel to furniture design was an idea of ​​Marcel Breuer, a Bauhaus man with a more or less primitive antecedent who was later captured by Gropius and creator of some chairs which were also replicated by MAC, which was nobody in the can see the waiting room. The Spanish company was sued, shall we say, for plagiarism, but eventually won the case when Breuer’s models entered the public domain. This does not deprive the avant-garde of its inherently epic aura, but gives an idea of ​​the level of incorporation of modern aesthetics into everyday life: the realization, in short, of utopia through artistic means.

The dream was short-lived, however, and barbarism and raging surrealist or political flames (or both) swept over Europe over the decade, shattering that tubular future that seemed to have finally descended to earth. Its origin, as Le Corbusier himself explained, lay in the synthetic and colorful optimism of some 1920s painters, such as Léger. After all, the depictions of the painters could also precede the architecture of the Renaissance. As for Spain, this artistic precedent was marked by the Madrid shops of artists such as Wladyslaw Jahl or Sonia Delaunay, to whom Luis Feduchi would pay homage with his carpets for the Capitol Building in Plaza del Callao: a landmark of the 1930s people from Madrid

The tubular furniture identifies these years as much as they do Packbots or ship buildings, their railings and terraces with length measurements. The great rationalist architects who gathered at the Granja El Henar meeting and organized in the GATEPAC populated its interiors with these futuristic and spartan elements. Gutiérrez Soto thus gave its character to the Bar Chicote itself and Arniches to the Instituto Escuela.

This great exhibition, curated by Pedro Feduci and Pedro Reula, draws mostly from the history of Rolaco and the Madrid core, but not only. Rolaco-MAC was the industrial materialization of an aesthetic and its theory. Then his story, which continued into the sixties, would not be the same, despite Feduchi’s efforts as a director for a while. But alongside the furniture, charming brochures and photographs also have their place in the exhibition: AC Magazine and the Catalan section of GATCPAC, directed by Josep Lluís Sert; the Sacha pastry shop in San Sebastián and the confluence – in the pure logic of the avant-garde – of the Falangist architects Aizpurúa and Labayen with the communists Luis Lacasa and Sánchez Arcas (authors of the Rockefeller Foundation) in an aesthetic that was as marked as the horizon of history . And of course the giant figure of Fernando García Mercadal, author of the Rincón de Goya in Zaragoza, which happens to be the catchphrase of Spanish rationalism.

The dream of this avant-garde was short-lived: barbarism tumbled across Europe and swept away the tubular future

There was no exact symmetry between the outcome of the war and the end of the happy dream, tempting as that idea is. The rejection of pre-war art was expected as an omen. Then came the neo-romanticism of the 1940s, theatrical and hallucinatory like the hustle and bustle in Max Ernst’s collages. Until the neo-avant-garde of the 1950s, spread by the Allies as a style of freedom, saved the strict elegance of rational forms. In Spain, companies such as H Muebles (promoted by Juan Huarte) or Cores & Sota returned to the manufacture and exhibition of polished surfaces, essential volumes that coincided with the heyday of abstract art: Millares presented his fabric designs to Gastón y Daniela, the critic José María Moreno Galván ran the Darro business.

But we ourselves experienced one last revival of architecture and furniture from the 1930s. Although it is left out of the exhibition, it is worth remembering in this way the strictly contemporary conclusion of a circle begun in painting, produced in painting. From the 1990s to today, the representation of the interiors and exteriors of the utopian dream, including the furniture, has become a habit in a certain panorama of Spanish painting. Rightly painted architectures was the title of the exhibition curated by Juan Cuéllar and Roberto Mollá, which has traveled through half of Europe in recent years with the staff of what Paco de la Torre, its best theorist, called “post-conceptual figuration”. Figurative and postmodern, pop and metaphysical at the same time, there were the quiet abodes of Dis Berlin (who had already curated labyrinths in 2011); Damián Flores and his repertoire of houses and architects; the rationalist Valencia recreated in Morandi style by Marcelo Fuentes; Cafes and cinemas in the enveloping painting by Carlos García-Alix. but painted architectures It was in fact the last link in a chain that includes exhibitions in the galleries Guillermo de Osma (Madrid, 2008) or Siboney (Santander, 2010) and others in My Names Lolita or Utopia Parkway, also in Madrid. In this way, the painters evoked what this exhibition evokes in the title: modern desire. Although the optimism in the incantation has now turned to melancholy.

“The modern desire. Furniture and Interiors in Spain in the Thirties”. National Museum of Decorative Arts. Madrid. Until October 23rd.

Previous articleObstacles for the successor to the 9 euro note
Next articleA coffee before shopping? You will spend more