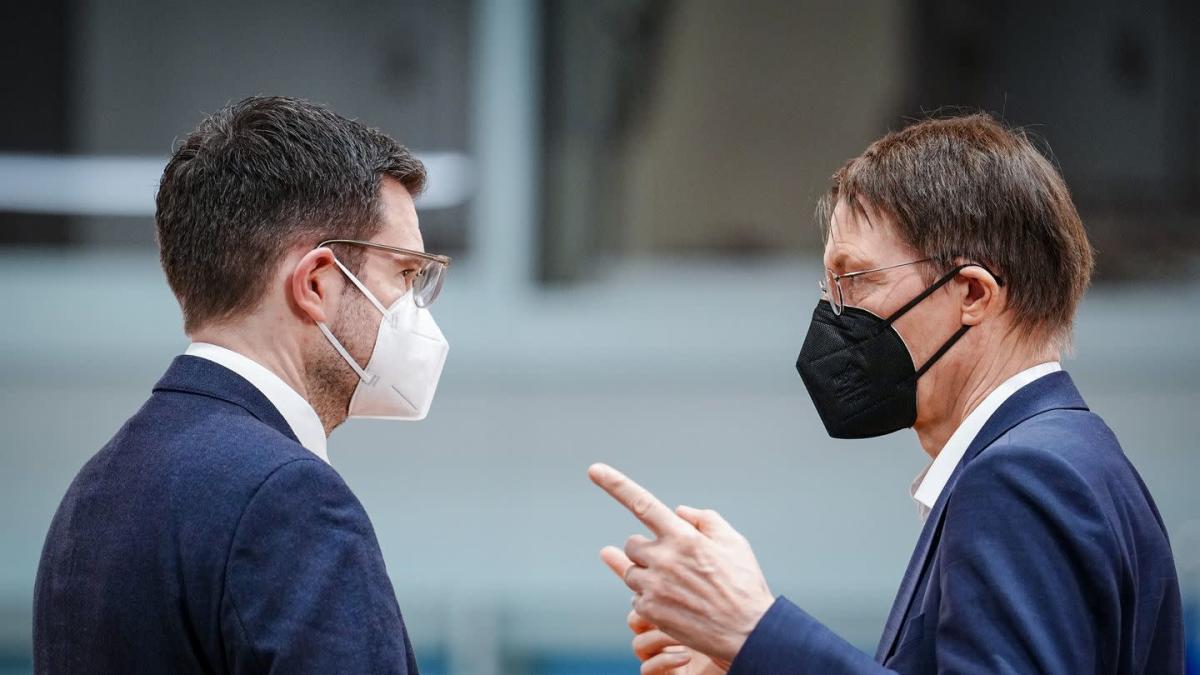 Berlin (dpa) – After the planned end of most corona requirements in Germany on March 20, the basic protection rules and other options for intervention in regional outbreaks should remain in force.

This provides a draft of a new legal basis at the national level, which was agreed by Health Minister Karl Lauterbach (SPD) and Justice Minister Marco Buschmann (FDP). This should allow federal states to continue to impose crisis measures at the site or state level. The federal government justified the plans amid the growing number of infections. Calls for additional safeguards came from the first countries, protectors of patients, but also from the co-ruling Greens.

Lauterbach told ZDF on Wednesday: “Open everything, of course that is not planned.” It is an instrument “with which countries can react immediately to new outbreaks or to a high number of cases.” You can work with it in such a way that you can control possible summer or autumn waves. Buschmann spoke of a “very good compromise”. Except for facilities for especially vulnerable groups, life can return to normal as far as possible. For “hotspots” with particularly dangerous situations, clearly defined additional measures are possible.

Mask requirement must remain in some places

The background is that after a relaxation plan decided by the federal and state governments in early spring on March 20, all the most far-reaching restrictions will be lifted if the situation in the clinics allows it. At the same time, however, it was agreed that “basic protection” should continue to exist. A follow-up regulation is needed for this, as the previous basis for measures in the Infection Protection Act ends on March 19.

Basic protection: On the one hand, these are specifically general rules that state governments can continue to prescribe, such as mask requirements in nursing homes, clinics, and on local public transportation with buses and trains. Mandatory tests in nursing homes and schools should also remain possible, as can be seen from the draft available to the German Press Agency. The obligation to wear masks on long-distance trains and planes will also be anchored throughout the country: so far, the access rule only applies there for those who have been vaccinated, those who have recovered and those who have been tested (3G ).

The critical points: If a corona situation worsens on site, stricter conditions should be able to be imposed, provided that the state parliament decides and determines the “concrete risk of a dynamically spreading infection situation”. Additional measures should then be able to be enacted in a “local authority to be specifically named”: mask requirements, distance requirements, hygiene concepts, as well as vaccination, recovery or test certificates, that is, rules such as 2G and 3G. Lauterbach said this could apply to districts, cities, regions or, in extreme cases, an entire federal state.

The draft lists two general criteria for what justifies such a dangerous situation: that a significantly more dangerous variant of the virus is circulating, or that there is a risk that hospital capacities in the region will be overloaded due to many new infections. A “rigid mechanism” with quantified cutoff values ​​is not provided, Lauterbach said. The deciding factor is the overall picture that countries can assess.

Criticism also from the government parties

The plans fall into a more tense pandemic situation. According to the Robert Koch Institute (RKI), the seven-day incidence rose for the seventh consecutive day to 1,319 new infections per 100,000 inhabitants per week. Health authorities reported 215,854 new cases in one day, and in 24 hours 314 more deaths were recorded. However, the two ministers defended the proposed rules. Buschmann expressed the expectation “that we can control the situation well with this set of instruments.” Lauterbach made it clear that the situation was being closely monitored. In the event that the number of cases and the clinical burden increase, the planned instruments would enter into force immediately.

Greens expert Janosch Dahmen told dpa: “We still cannot do a general cleaning of the protective measures.” A mask requirement in retail and other indoor areas is part of strong basic protection. “Under the given circumstances, it would not be consistent to impose a mask requirement on local transportation, but not in dense crowds when purchased.” State parliaments are now being asked to quickly ensure lasting security through resolutions. The leader of the FDP parliamentary group, Christian Dürr, on the other hand, told the “Welt” that the people had supported the coronavirus measures for two years. Now it is “the task of politics to restore normalcy.”

Lower Saxony’s Prime Minister Stephan Weil (SPD) criticized: “It is difficult to understand that the toolbox for containing the pandemic should be limited in such a phase. You do not throw away the fire extinguisher if it is still burning.” For example, a general mask requirement is needed for large crowds of people in closed rooms. Bavarian Health Minister Klaus Holetschek (CSU) told dpa: “The federal government urgently needs to improve its bill and give the states more tools so that we do not find ourselves in difficult situations again in the autumn with our eyes well open”. .”

Montgomery:yessensible measures were spoken in pieces

According to experts, the draft of the new legal basis for Corona is insufficient. “The principle of hope rules,” World Medical Association president Frank Ulrich Montgomery told the Funke media group dailies. The agreed basic protection is better than nothing. But: “Politicians have successfully talked about other sensible measures.”

The draft of a formulation aid for the coalition factions of the SPD, the Greens and the FDP, which has now been sent to the cabinet, will reach the Bundestag for further deliberations. Board member of the German Foundation for Patient Protection Eugen Brysch accused the coalition of social coldness: “Hundreds of older people in particular die every day from Corona. But the government wants to return to normal life as much as possible. Because the hospitals are not overloaded.”

Neighboring Austria temporarily suspends its general coronavirus vaccination obligation, which has been in place since early February. It is not proportional to the current Omicron variant, said constitutional minister Karoline Edtstadler (ÖVP). A new decision will be made in three months. The federal government sticks to the goal of a general obligation to vaccinate. The supportive attitude of Chancellor Olaf Scholz (SPD) is known and has not changed, explained the deputy government spokesman Wolfgang Büchner.