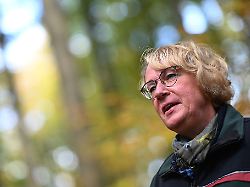 Springe (dpa/lni) – Lower Saxony’s Agriculture Minister Barbara Otte-Kinast (CDU) wants to draw attention to the state of the forest with a forestry campaign. Storms, drought and bark beetles have changed forests significantly in recent years, she said Monday in Springe. “We want to recognize the work that is being done to preserve it.” Around 60,000 hectares of forest have been damaged in Lower Saxony. The forest campaign called “Forst Aid – First Aid for the Forest” will run until the end of the year.

As a result, the state forests of Lower Saxony will receive an amount of 75 million euros by 2025 to promote climate-friendly reforestation of damaged areas. For reforestation in private forests, 60 million euros have already been made available in recent years through the “Joint Task for Agriculture and Coastal Protection” program. The promotion continues.

According to the ministry, €2 million will be made available for climate impact research at the Northwest German Forest Research Institute and €2.2 million for the Oerrel forest seed assessment center, among other things.

Almost all tree species are struggling with the effects of climate change, he said. Beech trees, predominantly native to Lower Saxony, have also died in dry spells in the last four years. The annual reports on the state of the forests of Lower Saxony indicate the increasing damage and death processes of tree species.