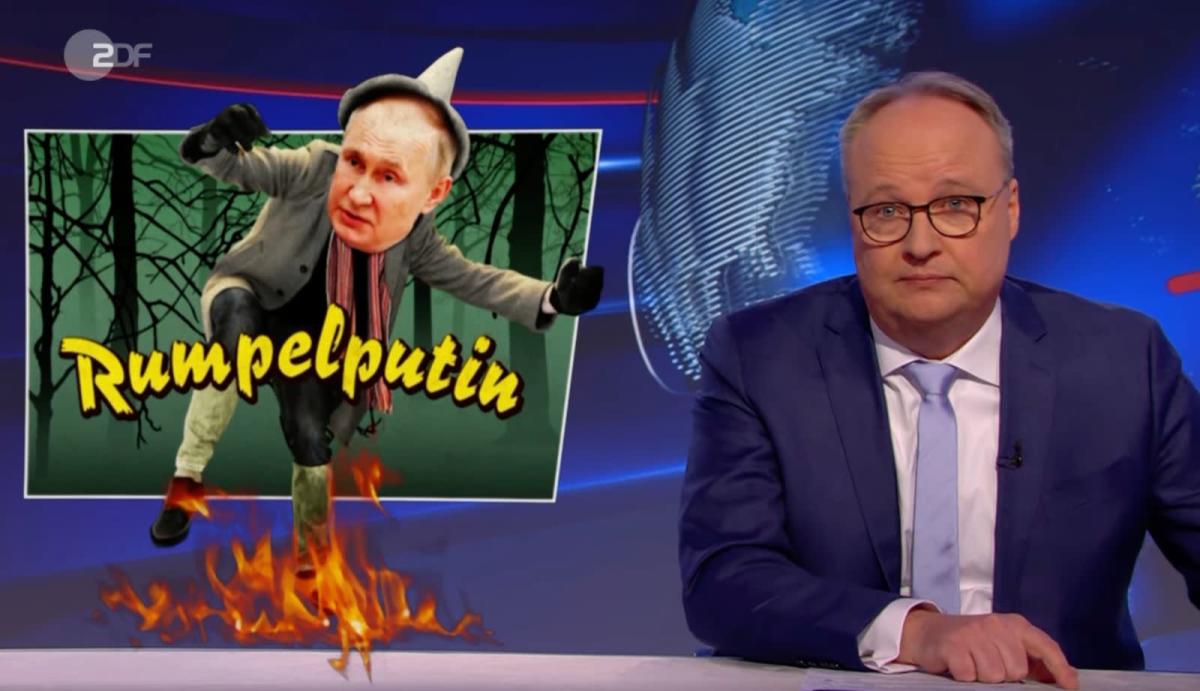 “A joint behind the wheel is expensive for Putin!” Is that the slogan that can save Germany from the Russian oil crisis? If it depends on the “heute-show” (ZDF), maybe. Sounds funny, it is. After all, it’s about satire, even if it’s not easy in times like these.

With Carolin Kebekus, Martin Klempnow, Dietmar Wischmeyer and Lutz van der Horst, the “heute-show” team sent four first-class outside reporters into the race this time. Her contributions, whether as a reporter on the front lines of the supermarket sunflower oil crisis, as an unquestioned vaccinator (Klempnow), as an art critic in the “Arschpekte” format (Wischmeyer) or as a citizen in search of a bunker (Van der Horst), turned out to be quite nice. But “nice,” as trash TV philosopher Dieter B. of T. bei H. once said, “is sche…e’s little sister.”

Good thing Welke was awake. The best Oliver, the presenter, shone with some casually interspersed jokes. Best of all: maybe cannabis, of all things, can help us get out of the oil crisis situation. To break free from dependence on Russian oil, drastic measures are required. And they may well be daring.

There is no time for the weather: one crisis after another is always pleasant

Everyone should save gas and oil, Welke made it clear again. He is full of saving tips everywhere. Two years ago, young environmental whistleblowers might have been happy about that. Now it’s just a matter of using less Russian oil. “Nobody really wants to know anything about the weather right now,” Welke said, “these angry kids have to realize that: one crisis after another is always nice.”

And in a time when the oil crisis is even turning into a sunflower oil crisis, as recent hamster purchases show, it’s all about oil-saving tips. Even old camels are being dug up: The idea of ​​”car-free Sundays” is being seriously discussed again, Welke reported. Mandated by the government, there were four times in November and December 1973. However, Welke qualified: Even if there were no cars every second Sunday, that would only save 1.4 percent on oil imports.

It would look different with a speed limit: “A speed of 100 on the highway would save eight percent of Russia’s oil.” And that’s where hemp comes in, according to Welke. “Legalize cannabis”, this is how the “heute-show” asks. Because under the influence of the hemp plant you would have the impression behind the wheel that you are running at the speed of light, but in reality you would be traveling more like a snail.

Warning to Putin: “Don’t mess with the inventors of the Kötbüllar!”

When it comes to the oil crisis, the “tank discount” FDP Finance Minister Christian Lindner’s idea will probably become much more real. He wants 30 to 40 cents a liter “on the cover of it,” as Welke put it. He is pretty, but also expensive. That should cost two billion euros, every month, Welke said. How do you do that without getting into debt? Avoiding the word debt! “We borrow the money of the future,” Lindner said, and the terms “supplemental budget” and “special assets” have already been mentioned. The “heute-show” suggested other synonyms: “Magic Mystery Money” for example or “thorny credit”.

However, the need to disassociate from Russia tomorrow rather than the day after becomes clearer with each passing day of the war in Ukraine. Especially since Putin’s nerves were getting tighter, Welke said: “The intervals between his tantrums are getting shorter and shorter.” He recently even threatened Sweden and Finland with military consequences if they wanted to become NATO members, Welke said, but warned: “Don’t mess with the inventors of the Kötbüllar!”

While the “Father of Frustration” degenerated into regular Rumpelstiltskin due to “military misfortune” (Welke), terrorizing the Ukrainian population with bombs, harassing his own population and reacting harshly to protests – Welke: “Yes, dear Lateral thinkers, you are experiencing a true dictatorship!” – Resistance fighters like Russian publisher Marina Owsjannikova (“Employee of the Century”) or Ukrainian President Volodymyr Zelenskyj are admirable opponents of Putin.

And so is the performance of the German volunteers who supported the Ukrainian refugees. Welke: “What volunteers do in this country embarrasses everyone who since 2001 has wanted to swear at the term do-gooder5.”

Just a volunteer service wasn’t so good, according to Welke. A “runaway pensioner from Hanover” tried to conduct his own peace negotiations in Russia. We were talking about Gerhard Schröder, who traveled to Moscow against the will of his SPD heirs, Scholz and Künast. There were no fights and no warnings because, according to Dietmar Wischmeyer: “A Schröder on the way cannot be stopped by either Olafs or Kevins.”

Dropping at the wrong time: “Why is Lauterbach doing this?”

The relaxation of the corona measures in this country cannot be stopped, which Welke clearly saw critically: “We are relaxing directly on the omicron wave. Why? Why is Lauterbach doing it?” Especially since otherwise (“The situation is worse than the mood”) he would still like to give the curmudgeon. Welke also gave the answer: “The fault lies with the FDP, which has already prevented the general obligation to vaccinate and which is now also making it more flexible, although “the SPD and the Greens know that it is wrong” in the face of the three million still unvaccinated people over 60 years of age, only 58 percent of citizens driven and little interest in the inactivated vaccine disappearing, which has so little demand that it has to be “thrown away”.

The interest in vaccines is almost negligible, the government’s €35 million vaccination campaign is “clinically dead”, said Martin Klempnow: “Last Sunday there were 1,475 first vaccinations in Germany. That means the probability of getting struck by lightning It’s almost as tall.” “