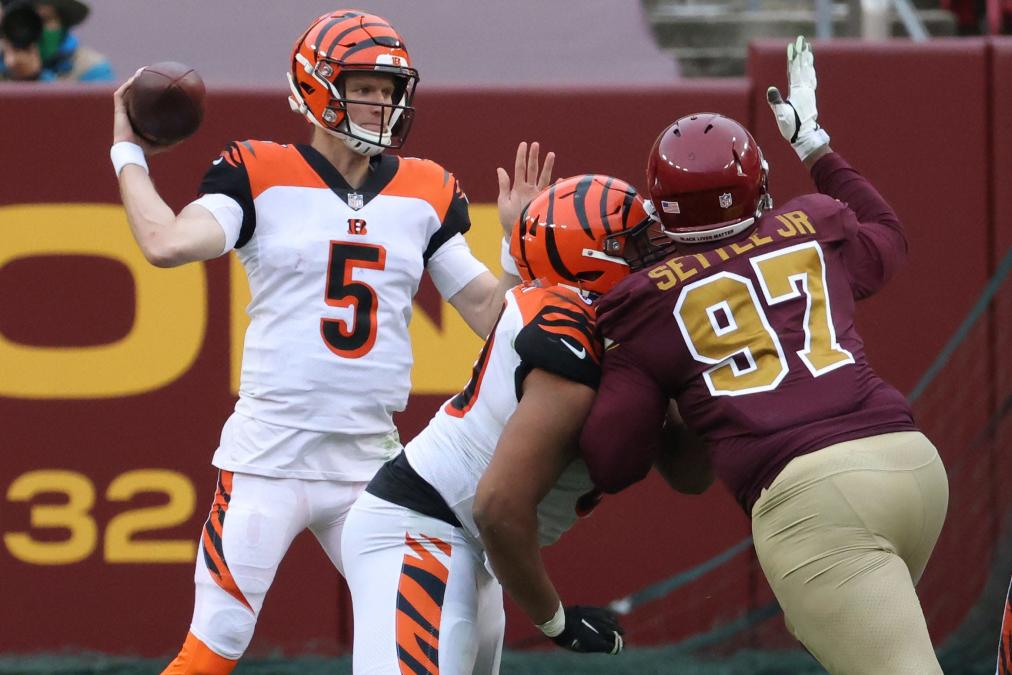 How many times have we heard coach Sean McDermott and general manager Brandon Beane say that the need to be tough in the trenches is imperative to building the Buffalo Bills?

Probably more often than McDermott has used the word “execution” to explain what went wrong in those fateful, morbid last 13 seconds of the fourth quarter in the playoff loss to Kansas City.

“Because I’ve studied teams, you have to be good up front on both sides of the ball,” McDermott said, again, at the NFL Scouting Combine a couple of weeks ago.

And on Monday, the Bills hierarchy put its money where its mouth is when Buffalo agreed to a deal with three big men: defensive tackles Tim Settle and DaQuan Jones, and offensive guard Rodger Saffold, a nearly 1,000-pound threat.

The Bills also extended center Mitch Morse’s contract for two more years, obviously a move to help with the salary-cap situation, but also because Morse is a rock-solid performer in the middle of the Bills’ offensive line.

“I’m always going to put resources up front,” Beane said. “This is how I think it should be built. Never be surprised if you see us trying to add in there, free agency or the draft, at any time.”

Settle, 24, and Jones, 30, will replace Harrison Phillips (who signed with the Vikings) and Vernon Butler in the defensive line rotation and are expected to improve Buffalo’s often inconsistent running defense.

Day 2 of the legal tampering window is already underway and the Bills still need to create cap space if they hope to bring more free agents into the fold.

Tom Brady: Read about his legendary night in Rochester

I’ll be chronicling the day’s events right here as they happen.

Mike Shula joins the coaching staff as an offensive assistant

McDermott has made two moves on his staff, continuing what has been the most tumultuous offseason he’s had since taking over as head coach in 2017.

Mike Shula, son of the legendary Don Shula, has been hired to serve as the primary offensive assistant. Shula was Carolina’s quarterbacks coach and then offensive coordinator from 2011 to 2017, coinciding with six years when McDermott was the Panthers’ defensive coordinator.

Also, Shula was the OC when current Bills OC Ken Dorsey spent five seasons as the Panthers’ quarterbacks coach, so there’s a strong relationship. Shula has 30 years of NFL coaching experience, also spending five years as head coach at Alabama, the last man to hold that position before Nick Saban took over in 2007.

The other move was internal, as defensive line coach Eric Washington added the title of senior defensive assistant to his line duties.

Bates is expected to receive an offer from RFA

The Bills have until 4 p.m. Wednesday, the start of the new league year and the signing of free agency, to present restricted free agents Ryan Bates and Justin Zimmer with a qualifying offer that would ensure the team has the right preferably if either player receives an offer from another team.

Bates is a lock to get one, while Zimmer probably won’t because he’s still recovering from knee surgery, plus the Bills just added Settle and Jones to the defensive tackle rotation.

There are three tiers of RFA offers: The highest requires a $5.56 million, one-year deal and if another team signs that player and the Bills don’t match the offer, Buffalo would receive a first-round pick. The mid-tier costs $3.98 million and would bring a second-round pick. The lowest offer is for $2.43 million and does not generate any compensation, but gives the Bills the right to match any offer the player may receive.

Bates will get the lowest offer, and given his general lack of playing experience, the Bills are unlikely to have to fend off other teams.