Mikati: We are committed to normalizing relations with the Gulf states 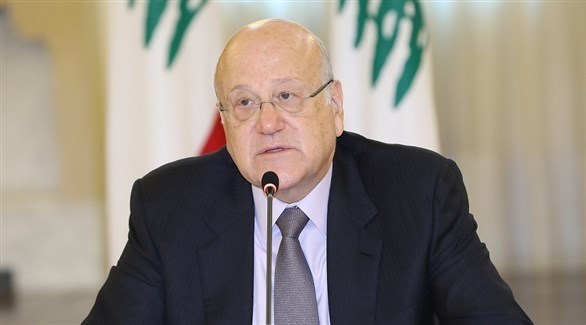 The Lebanese Prime Minister, Najib Mikati, announced his government’s commitment to the normalization of relations between his country and the countries of the Gulf Cooperation Council, in addition to his commitment to the decisions of the Arab League and international legitimacy.

Mikati said in a statement posted Monday on the official website of the Presidency of the Council of Ministers: “I renew the commitment of the Lebanese government to take the necessary and required measures to enhance cooperation with the Kingdom of Saudi Arabia and the Gulf countries of the Cooperation Council”.

Mikati emphasized: “Lebanon’s commitment to all the decisions of the Arab League and international legitimacy, and the commitment to work in a serious and real way to follow up and complete the implementation of its provisions in a way that guarantees civil peace and national stability for Lebanon and strengthen its unity.”

Mikati indicated that “the contact that occurred between him and the Minister for Foreign Affairs of the State of Kuwait, Sheikh Ahmed Nasser Al-Mohammed Al-Sabah, is in this context”, pointing to “a series of appeals and their link from various political, spiritual and economic leaders in this context”.

Mikati stressed “the need to stop all political, military, security and media activities that affect the sovereignty, security and stability of the Kingdom of Saudi Arabia and the countries of the Gulf Cooperation Council, and that originate in Lebanon. “.

The Lebanese prime minister reiterated “the commitment to take all measures to prevent smuggling, especially of drugs, directly or indirectly to Saudi Arabia and the countries of the Gulf Cooperation Council, and emphasizing all ports.”

Mikati stated: “Lebanon’s commitment to the Riyadh Agreement on Judicial Cooperation and the Extradition of Wanted Persons to the Kingdom of Saudi Arabia.”

“The Lebanese government will work to prevent the use of Lebanese financial and banking channels to carry out any financial transactions that could harm the security of the Kingdom of Saudi Arabia and the countries of the Gulf Cooperation Council,” Mikati said.

Mikati also emphasized “commitment to the provisions of the Kuwaiti initiative.”

It should be noted that the Kuwaiti Foreign Minister had made an official visit to Lebanon last January, which lasted for two days, and announced that his visit to Lebanon is of an Arab nature and is part of various international efforts such as measures to restore confidence with Lebanon.

The Kuwaiti minister brought 3 messages to Lebanese officials related to solidarity with the Lebanese people, and to ask Lebanon not to interfere in the affairs of Arab countries and for Lebanon to fulfill its international obligations.

During his visit to Kuwait last January 30, the Lebanese Foreign Minister, Abdullah Bu Habib, handed over to his Kuwaiti counterpart, Sheikh Ahmed Nasser Al-Mohammed Al-Sabah, the Lebanese response document to the Kuwaiti initiative.