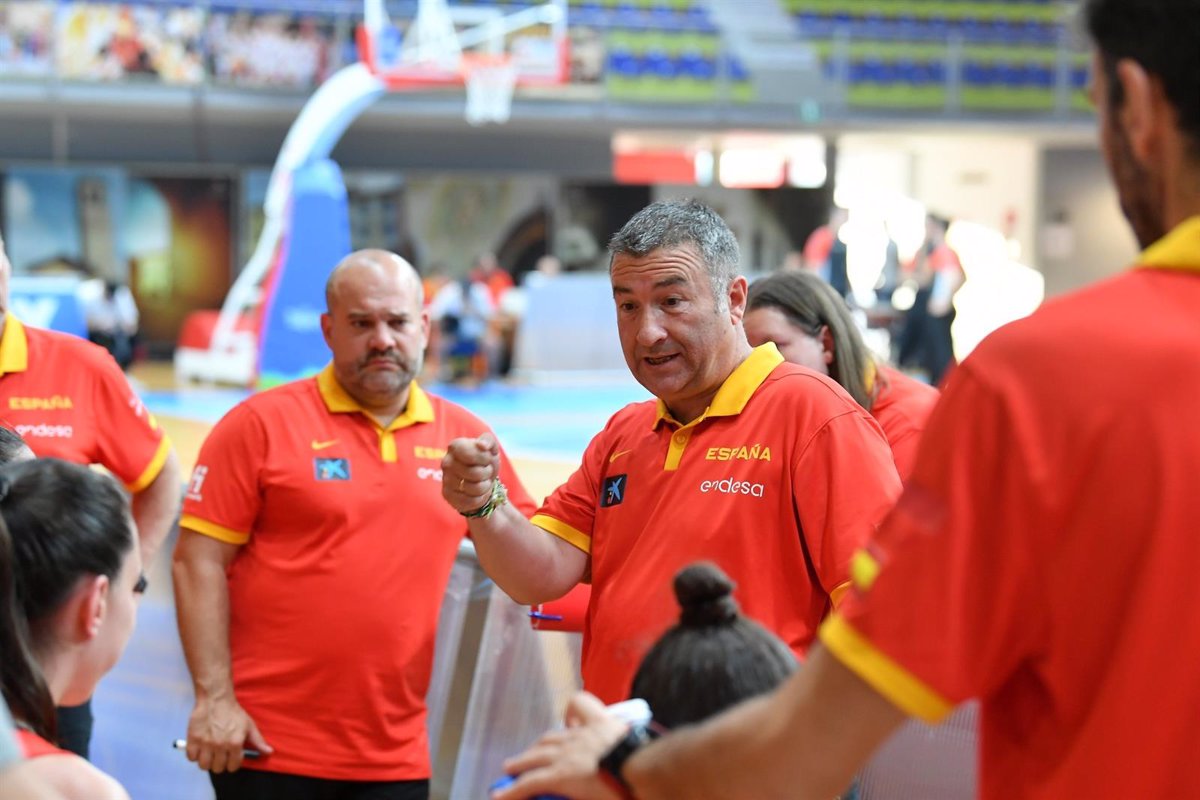 The women’s basketball coach, Miguel Méndez, assured that the substitution of the internationals must be done “calmly and with time” without putting “excessive pressure” on them, describing the project as “completely different” from the previous one which the team achieved, according to him, “the best moment in its history”.

“The relay has to be done calmly and with time. I think it’s good that we talk a lot about them, about the younger ones, that a lot of them are fine, but you have to be very patient and not put too much pressure on them because a lot of them are doing some of the things at that level for the first time in their lives that they will find later,” the Galician commented in an interview with Europa Press during the national team’s Road to the Future tour.

Méndez reiterates that some of the players are “starting to strive for big things” but that it’s different at team level than with the national team. “One thing is pointing out things at your club, a lot of it playing without European competitions or without aiming to win trophies and another thing is the highest level or the pressure we have when we go to the Spaniards are coming, it takes time to learn and to compete with the best players on the continent, they are different things and you have to be patient,” he explained.

The Galician coach joined the national team at the end of 2021, knowing full well that his first major tournament, without being able to participate in the 2022 World Cup, would be the Eurobasket 2023. He has already worked with many of the players.

“I think I’ve worked with practically everyone who’s here and those who aren’t because we’ve played each other many times and there’s an important knowledge about them about me and I about them and that helps . I’ve been lucky enough to work in training categories, I’ve been there for many years, I think the first time I did it was in 2001, including players, many of whom are already retired,” he pointed out.

However, it also appreciates the work being done in Spain. “There is a very important preparatory work in the federation, there are many reports, there are the technicians who work in the federation who do it very well. A person who doesn’t know the players at all could come here, and the following week be steeped in everything there is. We form an organization that is well oiled,” he said.

Miguel Mendez takes the opportunity at the head of the Spanish bank “as a privilege”. The Galician appreciates “being able to be the last link in the chain” that makes up all levels of Spanish basketball, who “work many days a year to have good competitions, clinics, coaching courses and there are many who work with these players throughout the year”. “I’m the last link and I consider myself the privileged one who manages to top it all off in the end. It’s a great pleasure to be here,” he added.

Méndez spoke from his experience of “20 years of more or less constant work with the FA” about “the way national teams work” and how they differ from coaching a team.

“In a club you have eight or nine months to build up, you can sign players from all over the world and you have a lot of time to build affinities, chemistry, technique and tactics into a team. In a selection, be it training or the absolute, you don’t have that time, you have to prioritize everything that you do a lot more and the work is totally different and maybe I can use the experience that I have in selecting formations , even in the absolute,” he explained.

“I am offered a job that I like, in a vacancy”

The manager replaced Lucas Mondelo on the bench, who had been with the team for nine years, in a glorious period that ended in controversy. “Surely we come from the best moment of the Spanish team in its history. A number of players of different generations have coincided with a great personality, with an incredible competitive character and we have been able to form a very strong team that has achieved many successes that of led by a top-class coaching staff, which has often been the differentiating factor between the two teams,” Mendez said.

He did not want to get involved in a dispute over his predecessor, who had to go to court both because of his dismissal by the association and because of the allegation of psychological abuse by two players. “For me nothing changes, here we are all professionals, they offer me a job that I like and a job that is free, so I have nothing more to say,” he said.

“That phase is over, we’re doing a completely different job, a different construction job, and we want to build a new team and try to be as prominent as possible in all the games we play,” added Miguel Mendez.

“UKRAINO-RUSSIAN WAR IS AN UNUSUAL THING”

Since 2018, Miguel Méndez has been coaching Yekaterinburg, a team with which he dominated European basketball and with which he won the Euroleague three times, a project that ended abruptly for both him and Alba Torrens after the invasion of Ukraine in 2022. “The war between Russia and Ukraine is something drastic and it is something great for everyone. Sport is just a part of it in the end, it’s true that on a personal level it was a blow,” he said.

“We managed to build something very cool in Yekaterinburg, we had a very good team that worked together, with a very good atmosphere, well-rounded and lost few games. And that’s over, in my case the opportunity to train the best players in the world, so abruptly, it’s still a blow,” he explained.

Looking ahead to next season, he will return to Italy, where he previously coached between 2013 and 2017, to manage Virtus Bologna. “It’s a project under construction, a very young section, they’ve been in the top division for almost three years and they want to build little by little. I know from experience that it’s not easy to have a men’s team that has won. ” has won a title in the past year and is a historic player in European and Italian basketball. It’s not easy to plant the seed of women’s basketball there, but we’ll see if we can do it,” he said.

Next season there will also be the atypical situation that both the men’s coach, Sergio Scariolo, and the women’s will coach the same club and will not be Spanish, which Méndez downplays. “It’s strange to have a club that has a high-level men’s department and a women’s department. That’s what there aren’t many. As such, Sergio (Scariolo) is Italian and that he works in one of the best Italian teams, it is Not.” News And joining an Italian team I’ve worked for there for four years isn’t news either,” he assured.

“THREE OR FOUR YEARS AGO ALMOST EVERYONE PLAYED OUTSIDE”

Miguel Mendez also appreciated the national talent’s return to the Endesa Women’s League. “In recent years a lot of players who have gone have come back because the situation was that three or four years ago practically the entire senior team played outside the country,” he said.

“A lot of them come back, that makes the league stronger. There is a 16 team league, the only league in Europe with that many teams, making it very competitive, very demanding and very sellable. We hope to continue to sell the women’s basketball product in the best possible way,” he concluded.