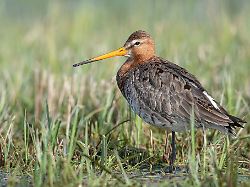 With spring, many migratory birds return to their breeding grounds in Central Europe. Experts are already observing the first black-tailed godwits in the Dümmer in recent weeks. An EU project aims to improve the habitat of this species of bird, which is in danger of extinction.

Diepholz (dpa / lni) – Numerous migratory birds are returning these weeks from their African winter quarters to their breeding grounds in Lower Saxony, including many black-tailed godwits. “The first black-tailed godwits have already been observed in the Dümmer and in the Lower Elbe,” said Jürgen Ludwig of the state ornithological station in a statement from the Lower Saxony State Office for Water Management, Coastal Protection and Nature Conservation ( NLWKN). . According to the authorities, the wide open grasslands of Lower Saxony are among the most important German breeding areas for endangered bird species.

To understand the movements and behavior of birds, around 70 Black-tailed Godwits in Lower Saxony have been equipped with solar-powered GPS transmitters weighing seven grams since 2018. Like many other migratory birds, Black-tailed Godwits spend the winter in West Africa, especially in Mauritania, Senegal, Gambia, Guinea-Bissau, Mali and Chad. “Most of the young birds also spend their first two years there. But most of the wintering ones return to the breeding areas in Central Europe,” said Ludwig, who is also responsible for an EU project on protection. of prairie birds in the NLWKN.

The project with the English title “LIFE GrassBirdHabitats” works to irrigate areas that are important habitats for prairie birds such as black-tailed godwits. The birds use their long beaks to search for food on moist ground. According to NLWKN, the quality of habitats in breeding areas is an important factor for successful breeding of prairie birds.

Among other things, the project aims to design areas in such a way that they serve as habitat for prairie birds on the one hand, but remain usable for farmers on the other. According to information, this happens with the help of controllable dams, with which the runoff of winter precipitation can be delayed until spring. After the breeding season, the dams are opened so that the areas can be cultivated.

According to the Nabu Nature Conservation Union, black-tailed godwits are primarily characterized by their long orange bill with a black tip. Their breeding season is between April and July. Consequently, there are occurrences especially along the East Frisian Islands, the coast, in the mudflats and also in the lower reaches of the Elbe, Weser and Ems.

Previous articleDKB Chief Examines Acquisitions, Sees No Bitcoin Offerings This Year
Next articleExplore the prospects of an investigative and media partnership between “Trends” and “Al Ain News”