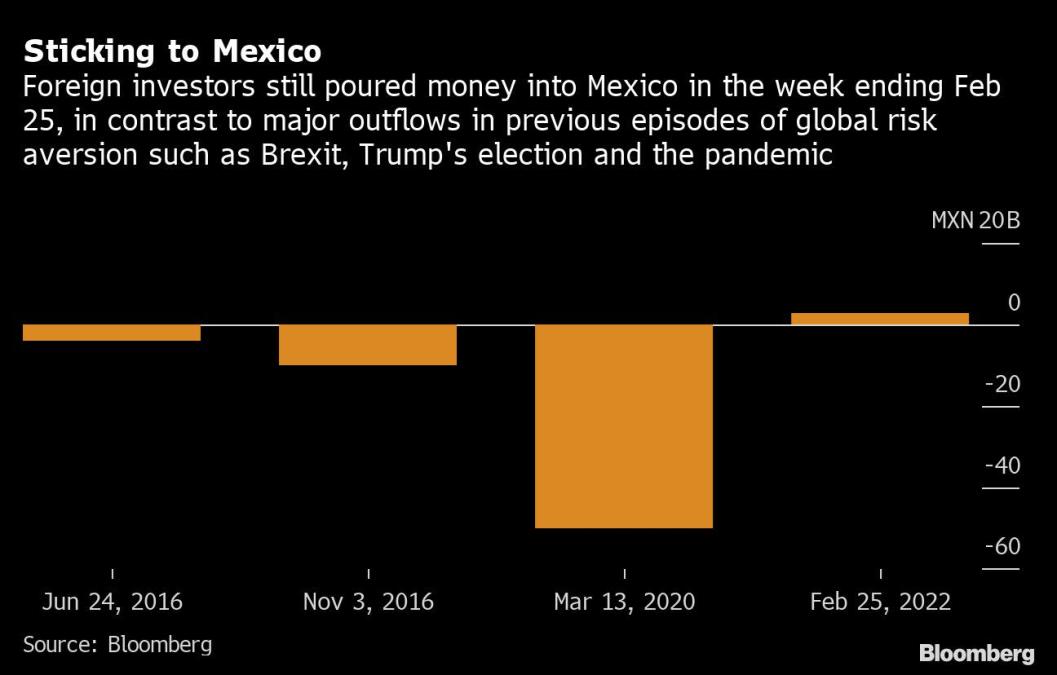 Peso-denominated securities look cheap as yields hover around multi-year highs: 2031 bonds pay a rate of close to 8.5%, the highest since 2019, while 2042 bonds offer a yield of 8.63%, the same than three years ago. So-called MBonds have been falling since early last year as prospects of tightening global monetary conditions pushed up US rates and hurt appetite for developing country assets.

But now there are signs that the worst is over. Unlike previous episodes of global market turmoil, the conflict in Eastern Europe does not see massive capital flight from local Mexican bonds, which foreign investors use as an indicator of emerging market risk. Overseas money managers sold 3.9 billion pesos ($190 million) worth of MBonos in the week after the Russian invasion of Ukraine, a fraction of the 61 billion pesos that went out in a week at the start of the pandemic in March. of 2020.

Foreign investors own more than 40% of the 3.4 trillion pesos in MBonos in circulation, which makes their portfolio movements important for the local market. In addition, these securities are especially sensitive to world events because the peso is traded 24 hours a day and the Mexican fixed income market is highly liquid compared to other developing countries.

MBonos are “attractively priced for buy-and-hold investors,” according to Kathryn Rooney Vera, director of global macroeconomics research at Miami-based Bulltick LLC. The recent drop in these stocks was due to a “broad reversal in risk sentiment” and therefore bonds have room to rally.

Current MBonos prices “are not in line with Mexican fundamentals,” said Claudia Ceja, a currency and rates strategist at BBVA in Mexico City. She adds that the prices reflect a worse scenario than one in which the country’s rating is downgraded.

In addition to attractive valuations, Mexico’s local bonds are also primed for the avalanche of asset reallocation triggered by the fallout from the war in Ukraine. Emerging-market investors are shedding assets from Eastern Europe and putting their money in relatively safe destinations like Latin America. Goldman Sachs estimates that Mexico’s weight in the JPMorgan & Chase GBI-EM Global Diversified Index is estimated to be between 0.6 and 0.8 percentage points after Russia’s exit from the benchmark index.

Mexican local bonds are a bargain as liquidation risk is contained