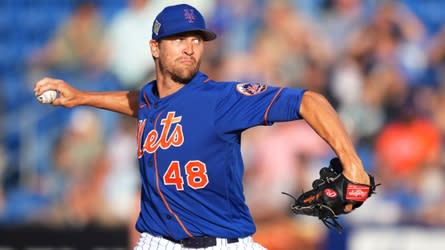 The two-time Cy Young Award winner struck out five batters over 3.0 IP, throwing just 52 pitches with 38 of them strikes.

He allowed four hits in the spring outing — three singles and a double for dylan carlson.

The only run came on a ground ball hit by harrison bader that slipped Francisco Lindor into the outfield, Carlson scoring from second.

Star pitching partner Max Scherzer came on to replace deGrom at the top of the fourth inning. After his day was done, deGrom was asked how Scherzer came in to pitch behind him.

“Yeah, he’s definitely cool, but I’d rather be able to see him pitch,” deGrom said. “I finished and then I did all my stuff, so I didn’t really get to see him pitch. He was doing the same thing getting ready when I was pitching. I think it’s cooler to sit there and watch him attack hitters.”

DeGrom’s spring ERA now sits at 1.80 after two starts and 5.0 IP. He has struck out 10 batters and allowed just five hits. On Sunday, he worked three corners in a row and was trying to mix up his stuff.

“The first two were good and then I was trying to see if I could rebound one, and I couldn’t, see if it would work as a strikeout pitch,” deGrom said. “I think if I had released it like the first two it would have been better, but I left it a little bit. Something I’ve been working on, who knows, it could be something I use during the year.”

He was then asked if he had learned anything from Scherzer so far in spring training.

“We had talked a little bit about the curveball,” deGrom said. “And then he talked about how he got his to where he is now. That’s something I’ve been working on and that’s why I tried to throw it three times in a row today, just to see if I could get it.” where I want him to be. And as far as seeing how he prepares, his game plan, looking at the lineup before he goes out there. Just talking about those things. He’s been in this league a long time and he’s taken on these guys in a bunch, learning how he goes after them is great.”