Men’s fashion is experiencing its own “revival” in Milan. 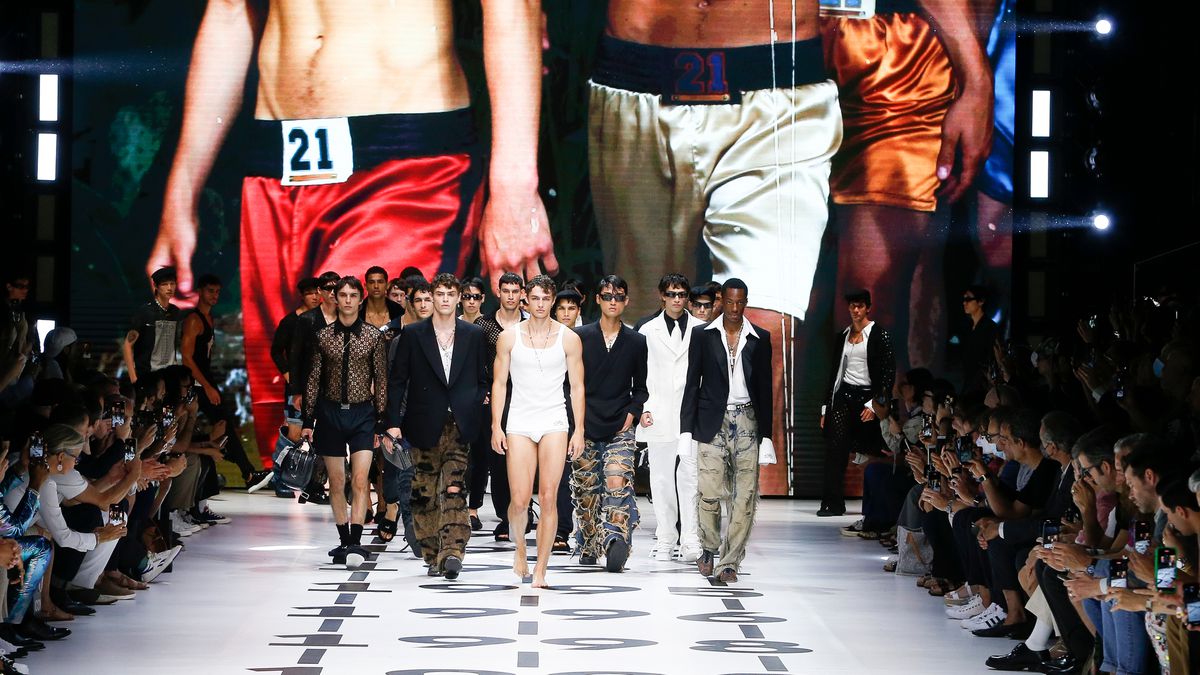 Domenico Dolce reiterates that the theme of Dolce&Gabbana’s summer 2023 men’s collection was dictated by circumstances. “We’ve been getting requests for garments that we made in the 1990s and early 2000s for a while,” he explains. His partner Stefano Gabbana emphasizes: “I started researching the resale channels and realized that certain designs had a real trend.” Thus, a majority of the designs they presented last Saturday are exact reissues of discontinued, sold out and partially missing ones products. With references such as David Beckham – “because of him all men joined fashion,” explains Gabbana – the collection includes pieces and replicas of his milestones. For example, ripped and baggy jeans paired with a tailored jacket and sandals, t-shirts with logos, beaded suits. “Making this collection was like therapy,” Dolce admits.

Become your own creator revival is an increasingly relevant strategy in Italian fashion. Unlike other industry hubs, many of the big firms present in Milan continue to be creatively guided by their founders, who today face a particular challenge: reinventing their own milestones for new customers, those of Generation Z, she didn’t know who they are. After the difficulties caused by the pandemic, it seems the time is not to revolutionize anything but to consolidate codes that have been in the making for years. Therefore, there may be nothing truly subversive in the collections that Giorgio Armani has presented, but his goal has long been not to shock but to celebrate a solid aesthetic heritage like few others. At Emporio Armani, a light, Mediterranean holiday wardrobe focuses on its own textures, materials and colors: natural fabrics, shades of blue, white or gray, pleated, iridescent or almost transparent garments, whose codes range from tailoring classic to martial arts uniforms.

Giorgio Armani, his most refined line, is dominated by silks with graphic and classic prints in shades of blue. They offer luxury, containment and above all conceptual solidity. They are unequivocally Armani, as is the Versace collection, with historically inspired prints – in this case Greek theater masks – bright colors and futuristic textures, they relate without fail to the imagery that Donatella Versace continues to project.

Dean and Dan Caten, the founders of Dsquared2, also look back on the nineties. At last Friday’s parade, Canadians celebrate the eclectic spirit and extreme overlapping of garments and prints practiced in their previous collection. However, now the inspiration is not mountaineers, but surfers.

Kean Etro, the creative director of Etro’s men’s line, began a reflection on the spiritual value of travel during the pandemic. Now, from a more optimistic perspective, he unequivocally proposes a collection designed to be enjoyed on vacation. Its formula is anchored in elements as hedonistic and recognizable as kaftans, robes and sarongs, made of colorful and light, almost steamy fabrics, which assert that textile sensuality – especially silk – has long ceased to be the exclusive heritage of fashion. Lace and crochet dominate, not to mention paisley prints.

There’s another lesson from this fashion week: after saturation fan shopthe new and very young customers of ready to wear Luxury brands care more about fashion than logos. Stefano Gabbana explained it when presenting his collection and Fendi confirms it. The double F of the Roman house, in the form of a diagonal print, runs through sweaters, t-shirts and knitwear, but it’s not the only support that Silvia Venturini Fendi offers her followers. The tailoring of garments with openings has also become part of the brand’s language, as has the color palette of a collection conceived as an examination of the everyday wardrobe.

At Prada, these are times of serenity and, above all, consolidation. The creative tandem of Miuccia Prada and Raf Simons seems fully greased, and the test is a collection featuring the live performance of the veterans of the In the SonicYouth. On the runway, a Velvet Underground look with jackets, turtlenecks and pieces with unexpected twists: collarless jackets and gingham trench coats.

“The clothes are classic, but the mix contradicts that,” notes Simons in the show notes. The Prada logo, synthesized in the inverted isosceles triangle that has always adorned the House’s pockets, is omnipresent: even the impeccable black suits, who opened the parade incorporate it into the upper part of the back.

In a calendar dominated by veteran companies, brands like Magliano manage to show their heads, combining luxury Italian tailoring with class discourse. His robes seem lived in, forgotten, punished by time. “Someone slept with these clothes on,” reads the text he gave to those present.

For JW Anderson, Jonathan Anderson’s company, a collection is always an opportunity to push the boundaries of fashion. For example, by embedding bicycle or skateboard handlebars in sweaters and T-shirts, or by bulky shoes with rounded soles covered in reflective crystals that indicate jewelry. Anderson presented his unified collection for men and women in Milan, as did Matthew M. Williams, who combines Givenchy’s artistic direction with his own signature, 1017 ALYX 9SM. Williams presented a technology and electronics inspired collection that harks back to the early 21st century. Another illustrious eccentric, the American Jeremy Scott, presented a lofty pop collection for Moschino in homage to the illustrator Tony Viramontes. With his talent for defining shapes and colors with the poignancy of a comic book artist, Scott provided his own answer to the debate: if fashion houses are to capture the attention of new generations of customers, they must find a way to tell them their own story. .

- Advertisement -
Share
Facebook
Twitter
Pinterest
WhatsApp
Previous articleMITECO commissions the implementation of measures to preserve and improve the environment of the boulevards of the Mar Menor
Next article“Are you going to give me a job?” A woman confronts an indigenous protester in San Miguel de Comun