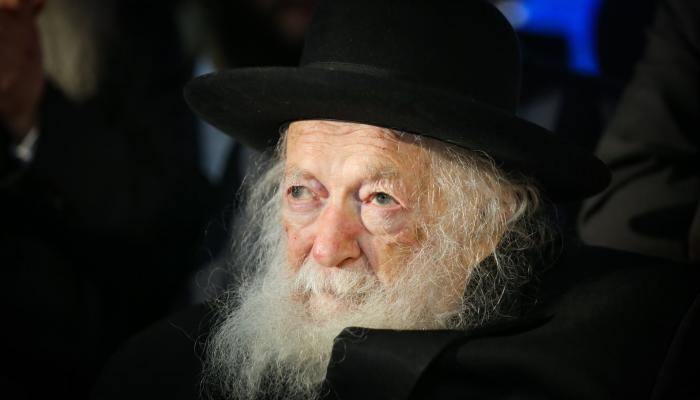 Since the announcement of Rabbi Chaim Kanevsky’s death at the age of 94 on Friday, Israeli police have been preparing for funeral arrangements.

Rabbi Kanevsky was a highly influential leader in the Lithuanian Orthodox community in Israel, with hundreds of thousands of followers.

The funeral took place in the city of Bnei Brak, in central Israel, a city with a religious majority.

The Israeli news site Ynet estimated that more than 400,000 people took part in the funeral, while news channel 12 said the number of participants reached 750,000.

Before the funeral, 1,700 buses from various parts of Israel arrived in Bnei Brak.

Less than an hour after the funeral, Ynet said 47 people were slightly injured as a result of the stampede and were treated on the ground by Magen David Adom teams deployed widely in the area.

And the Israeli police closed many of the streets linking central and northern Israel and surrounding the city of Bnei Brak, which was closed to traffic.

In an earlier statement, police called on the public to “exercise restraint, exercise responsibility, refrain from pushing others and crowding, and comply with police instructions to allow the funeral to take place safely and prevent harm to life.” of citizens due to the large number of people”. .”

“Due to the large number of participants and the expected noise, we recommend avoiding arriving with children out of fear and risk to their safety,” he said.

It added: “Climbing fences, balconies, trees, buildings and roofs, or hanging from a moving vehicle, including emergency and rescue vehicles, is strictly prohibited.”

The police had also previously announced that reinforced forces accompanied the funeral at the Bonevis cemetery in the city of Bnei Brak.

For its part, the Israel Broadcasting Corporation said: “Anticipating that the severe crowding and stampede would lead to a disaster, the Magen David Adom raised the alert level.”

He added that more than 3,000 police and soldiers were deployed in the vicinity of the funeral in anticipation of any emergency.

In 2015, severe overcrowding during the funeral of Rabbi Shmuel Vosner led to two deaths.

It is noteworthy that the largest number of participants in a funeral was at the funeral of former Sephardic rabbi Ovadia Yosef in 2013, when up to 850,000 people participated in the funeral. 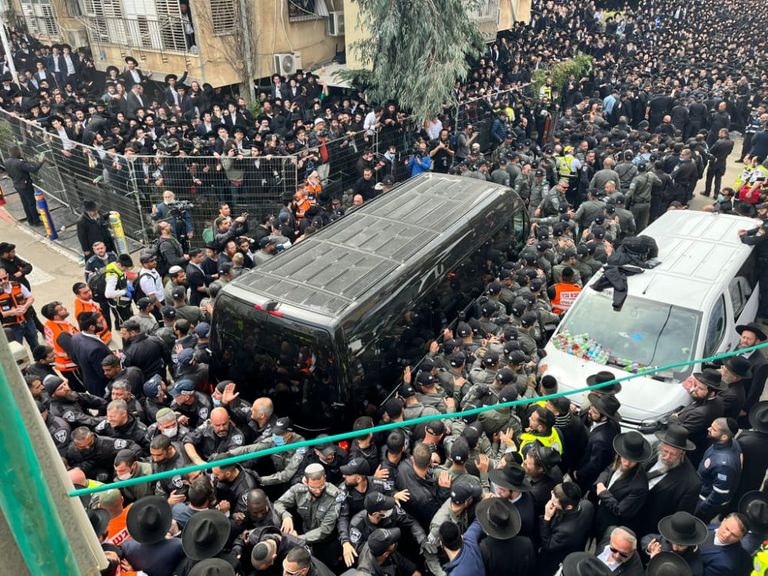 Kanevsky was born in Belarus on January 8, 1928. His father, Yaakov Yisrael Kanevsky, was a famous Torah scholar, while his mother, Miriam Karelitz, was the sister of Rabbi Abraham Yeshayahu Karelitz, a prominent figure among religious Jews of the twentieth century. century.

Kanevsky came to what was then British Mandate Palestine in 1934 when his father took the family to live in Bnei Brak.

He married Bacheva Eliashev, the daughter of Rabbi Yosef Shalom Eliashev, another prominent Orthodox rabbi who lived in Jerusalem until his death in 2012.

Kanvisky was known for sticking to a rigorous and intense study schedule.

Unlike most prominent rabbis who regularly give public lectures, Kanevsky gave lectures or talks only three times a year, on the dates of the deaths of his father, uncle, and Shash, his former teacher.

Thousands flocked to his home in Bnei Brak to seek his opinion on the law or religious advice, while prominent public figures, including politicians, visited him for a chat, especially at times of major national events such as elections or the recent outbreak of the war. coronavirus.

In the late cleric’s obituary, Israeli Prime Minister Naftali Bennett said: “The rabbi always made sure to greet everyone with an open heart and light in his eyes. He was a true commander-in-chief.”

Israel’s Foreign Minister Yair Lapid described him as an “important and significant leader in the lives of many Jews.”

In turn, Israeli Defense Minister Benny Gantz said: “Beyond his greatness when it came to religious law, Rabbi Kanevsky was a man of profound wisdom of life. He cared about Torah and cared for humanity.”