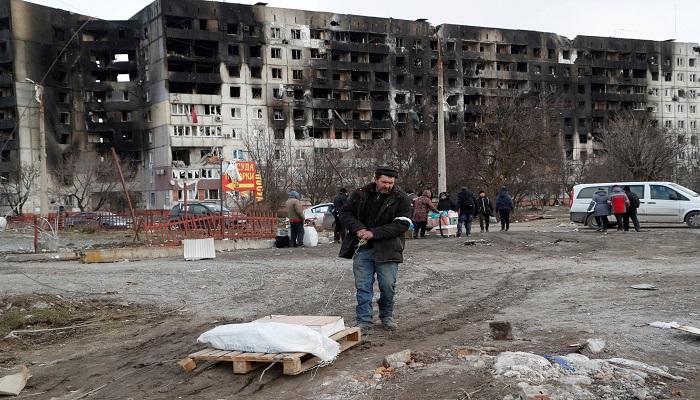 There are conflicting reports about fighting between Russian and Ukrainian forces on the borders of the city of Mariupol in southeastern Ukraine.

While the Russian Defense Ministry announced on Friday that the Russian military and its separatist allies are now fighting in the center of the besieged strategic Ukrainian port of Mariupol in the country’s southeast, the other side says its forces control its main areas and other cities. . in the rest of the country.

“In Mariupol, units of the self-proclaimed Donetsk People’s Republic, with the support of the Russian armed forces, have closed their siege and are fighting nationalists in the center of the city,” Russian Defense Ministry spokesman Igor Konashenkov said. .

The ministry added that separatists in eastern Ukraine were “tightening the noose” with the support of Russian forces around the Ukrainian city of Mariupol.

The ministry added that fighting continues in the center of Mariupol.

For their part, Ukrainian officials said Russia has lost more than 14,000 soldiers, 450 tanks and 93 aircraft in Ukraine since the start of the Russian offensive.

A statement by the General Staff of the Ukrainian Armed Forces on Facebook, reported by the official Ukrainian news agency “Ukrinform”, added that “between February 24 and March 18, the total losses of the enemy amounted to 14,000 soldiers , 450 tanks, 1,448 armored fighting vehicles and 205 artillery systems and 72 multiple launcher systems.

It is not possible to verify the numbers advertised from an independent body.

In the context of repeated statements by the Ukrainian president, Volodymyr Zelensky reiterated that his forces still control important areas of the country that Russian forces try to control, after weeks of continuous Russian attacks.

In a video message posted on the Telegram platform earlier today, Yelinsky added that Ukrainian forces responded to every attack launched by Russian units.

The Ukrainian president added that residents of cities like Mariupol in the south of the country, Kharkiv in the east and Chernihiv in the north, which are still besieged by Russian forces, will not be abandoned.

He pointed out that from the army to the church, everyone is doing everything they can for the Ukrainian people and promised: “They will be free.”

He also thanked US President Joe Biden for his “new and effective” assistance.

On the ground, emergency services said one person was killed and four injured after parts of a Russian missile fell on an apartment building in the north of the Ukrainian capital, kyiv, on Friday morning.

It added in a statement that 98 were evacuated from the five-story building.

On Friday, the Russian Defense Ministry announced that its forces had shot down 6 Ukrainian drones, including one of the “Bayraktar” model, while imposing a no-fly zone in Donbass.

The ministry said in a statement that the Air Force destroyed 81 military installations in Ukraine, including 4 air defense systems and 3 command centers.

This comes as Ukraine announced that its air defenses had shot down 14 “hostile” air targets on its territory over the last 24 hours, referring to the Russian forces that launched the attack on February 24.