Marina Ovsyannikova: the Russian journalist labeled as the bravest woman on television 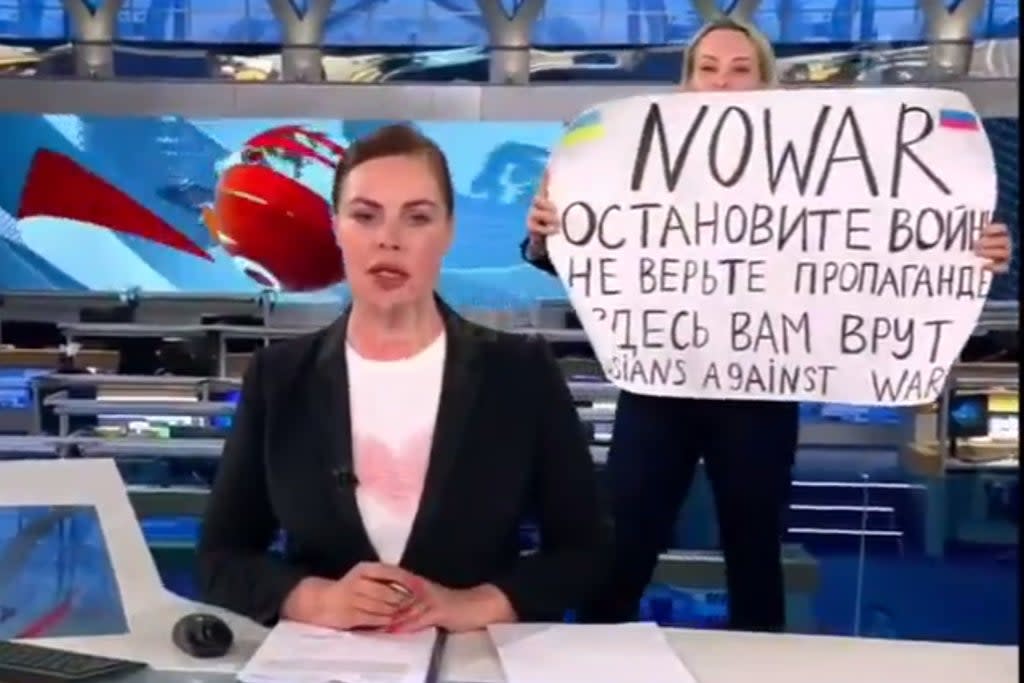 Marina Ovsyannikova’s outstanding act of defiance, which saw her storm the set of Channel One during the Vremya news show, watched by 250 million viewers worldwide, and interrupt famous presenter Ekaterina Andreeva to protest against the war in Ukraine on March 16, inspired the world.

Arrested by guards shortly after the brave stunt, lawyers spent nearly 24 hours searching for Osyvannikova before she finally appeared Tuesday night at Moscow’s Ostankino district court. She has since been fined 30,000 rubles (£214) and released after pleading not guilty to the charge of organizing an unauthorized public event.

“These were indeed some of the most difficult days of my life,” he told reporters after the brief hearing in which he wore a black blazer and necklace in the colors of the Ukrainian flag. “I went two days without sleeping. They interrogated me for more than 14 hours. They did not allow me to communicate with my family nor did they give me legal assistance. I was in a pretty tough position.”

As one of the most important members of the Channel One staff, who has worked for several years in the Directorate of Information Programs, Ovsyannikova was able to bypass the armed guards and run after the announcer Andreeva, shouting: “Stop the war. No to war.” Holding a sign that read: “Don’t believe the propaganda, they’re lying to you here.” Andreeva, who has anchored the Vremya newscast for more than two decades, continued to read her script.

Russian President Vladimir Putin recently passed legislation preventing the spread of what the Kremlin calls “fake news” about the country’s military. It has led to several independent Russian media outlets being forced to close and journalists fleeing the country. The final punishment is up to 15 years in prison, which some fear Ovsyannikova may still face because she was fined for the video statement released after the protest, rather than breaking into the Channel One set.

“There are still risks of a criminal case being opened against Ovsyannikova, but the chances of that have decreased dramatically after the fine she received today,” said Pavel Chikov, director of Agora International Human Rights Group. “No case has been opened against her performance yet, and the prosecutor’s office may still decide to do so,” he continued. “But the fact that she has already received a swift punishment indicates that she has made a political decision not to continue persecuting her.”

Understandably, Ovsyannikova is being labeled Russia’s bravest woman for her inspiring and dangerous stunt. Her actions have already been praised by Ukrainian President Volodymyr Zelensky during his speech on Monday night. He said that he was “grateful” for Russians fighting to tell the truth, and that he was grateful “to the lady who walked into the Channel One studio with an anti-war sign.”

British MPs are now pushing for Ovsyannikova to be nominated for a Nobel Peace Prize and 46,000 users who have flooded her Facebook page with messages of respect and adoration. Before her sentencing, French President Emmanuel Macron even offered Ovsyannikova consular “protection” and said she would raise her case with Vladimir Putin.

The 43-year-old is a mother of two whose ex-husband Igor Ovsyannikov is a longtime director at Russia Today. Before her television career, Ovsyannikova was a competitive swimmer who crossed the Volga River in Russia and the Bosphorus waterway in Turkey. She was born in a Ukrainian Black Sea port called Odessa, which is now preparing for a Russian attack. Ovsyannikova earned a bachelor’s degree from Kuban State University and a master’s degree from the Russian Presidential Academy of National Economy and Public Administration.

Raising her family was a key reason behind Ovsyannikova’s courageous act of defiance. “My father is Ukrainian, my mother is Russian and they were never enemies,” he said in a pre-recorded video posted on his Facebook by human rights group OVD-Info shortly after he broke Channel One. happening in Ukraine is a crime and Russia is the aggressor. The responsibility for that aggression lies in the conscience of a single person. That person is Vladimir Putin, “he continues while wearing a necklace with the blue and yellow colors of the Ukrainian flag.

In days gone by, Channel One might have been seen as a dream job for Russian journalists, according to Cynthia Hooper, a Russia expert at the College of the Holy Cross in Massachusetts, “now those same positions really involve nothing more than very, very deep complicity in fabricating stories designed to bolster the Putin regime, fuel popular hatred against perceived external enemies, and convey support for criminal and destructive government policies,” he said. the atlantic at the beginning of this year. “People seem nervous about going off script, or even what, exactly, their script is supposed to be,” he continued, further emphasizing the bravery of Ovsyannikova’s actions.

Ovsyannikova goes on to mention the channel’s collective silence on the 2014 poisoning of anti-corruption activist Alexei Navalny, which the Russian opposition figure accused Putin of being behind. “We didn’t show up at the protests,” Ovsyannikova laments, “this was something we were quietly observing.”

A number of prominent journalists have reportedly left their posts at state media since Ovsyannikova’s protest, including Zhanna Agalakova and Vadim Guser of Channel One and NTV, respectively. For Tatiana Stanovaya, political analyst and founder of R Politik, this is indicative of the amount of discontent within the system: “Or right now this wave comes to nothing. Or we may see similar protests more and more frequently: these desperate, vocal acts where people make similar gestures.”

If Ovsyannikova is completely free from further sentences from the Russian state, one thing is certain: her courageous actions have sparked a wave of resistance both at home and abroad.

- Advertisement -
Share
Facebook
Twitter
Pinterest
WhatsApp
Previous articleA dangerous substance behind the death of thousands of birds of prey in Europe
Next articleTeuchert on child criticism: “There is no wellness oasis” in the cabin