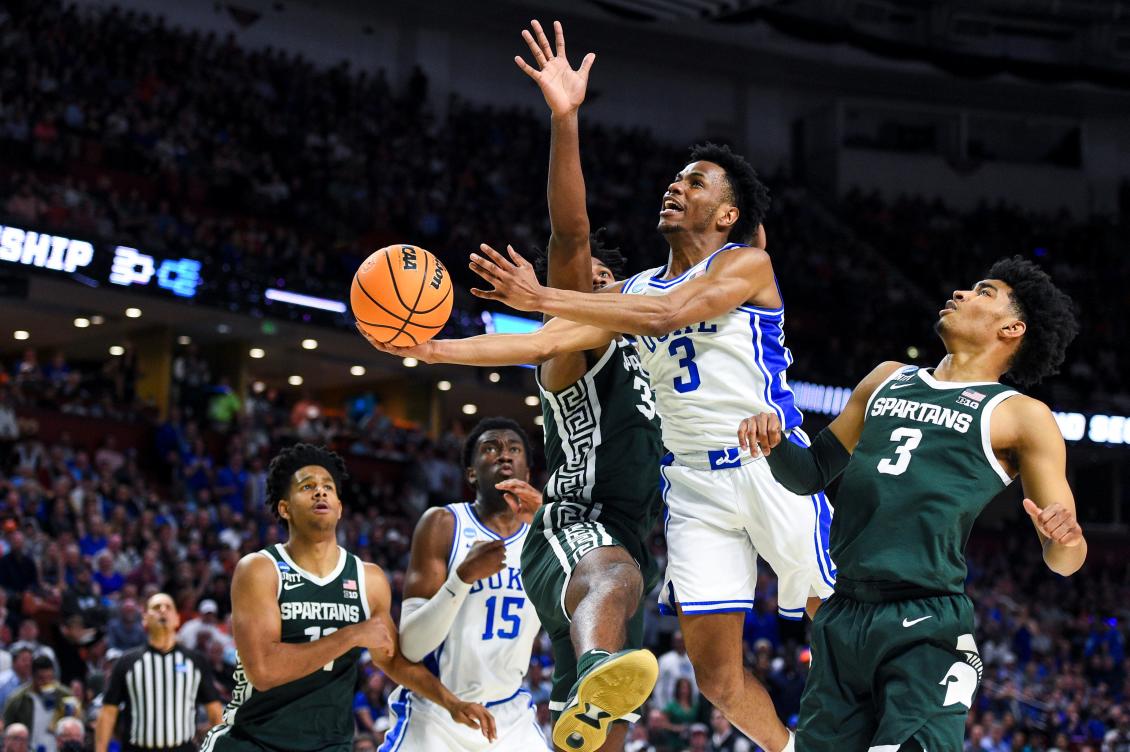 With Sweet 16 tickets up for grabs, another day of second-round action on Sunday capped off the exciting first weekend of the NCAA Tournament.

We’ve already had a No.15-seeded Cinderella at San Pedro make it to the second weekend with victory on Saturday. And a classic March Madness in North Carolina’s victory over No. 1 Baylor.

Sunday was Duke vs. Michigan State. And the second-round matchup certainly delivered, with the Blue Devils keeping coach Mike Krzyzewski’s career alive by knocking out a tough Michigan State team.

Houston and Villanova started Sunday in impressive fashion, advancing to the Sweet 16 in the South Region with convincing wins against Illinois and Ohio State, respectively. And Iowa State became the second No. 11 seed to reach the Sweet 16, joining Michigan, after defeating No. 3 Wisconsin.

A look at the winners and losers from Sunday’s eight games:

The Blue Devils (30-6) trailed by five with five minutes left, but made key plays down the stretch to pull away from a Michigan State team that refused to leave and win 85-76 in the final minute. Second round classic. While all the pregame hype was on Coach K and Tom Izzo, it was all about the Duke players rising to the occasion. The hero for the Blue Devils was Jeremy Roach (15 points, five blocks), who hit a huge 3-pointer with 1:18 left to give this team the winning momentum it needed to shake off the Spartans and advance. Mark Williams had five blocks to lead a strong defensive effort and Paolo Banchero (19 points) led five Duke players in double figures.

“For a young group, they showed incredible grit,” coach Mike Krzyzewski said after the game on CBS. “It wasn’t any training. I’m very proud of them… It looked like our ship was sinking.”

The Wildcats (33-3) got 58 points from their two stars, Ben Mathurin (30 points) and Christian Koloko (28 points), and that duo scored the team’s final 15 points to help Arizona prevail in overtime against a certain team of TCU. 85-80. Arizona made the plays down the stretch to escape the Horned Frogs and reach the Sweet 16. Mathurin, in particular, made the game-winning shots late in regulation to help Arizona reach overtime after falling behind in the games. final minutes.

The Red Raiders (27-9) relied on their elite defense in the final minutes to saunter past Notre Dame 59-53 in the second-round clash that sent Texas Tech back to the Sweet 16. It’s been a season of greats. achievements under the first-year coach. Mark Adams. With the Irish and Red Raiders trading baskets in the closing minutes, it was Texas Tech forcing steals and blocking shots that turned out to be the difference. Kevin Obanor (15 points) paved the way for Texas Tech.

The Boilermakers (29-7) are the only Big Ten team that hasn’t underperformed in dispatching Texas 81-71 to reach the Sweet 16. Jaden Ivey (18 points on the night) hit a 3-pointer with 1:03 left for playing. to give Purdue a 77-71 lead after Texas cut the deficit to one possession. The All-American shooting guard’s playmaking gives coach Matt Painter a dimension he hasn’t had on some of his previous elite teams. And Trevion Williams scored 22 points off the bench as the Boilermakers held off all of Texas’ late runs.

The Cougars (31-5) lead the nation in defense in field goal percentage and their stifling approach was on full display in a 68-53 victory over an Illinois team that won the Big Ten regular season. Coach Kelvin Sampson’s team used their defense for offense, seemingly controlling the momentum of the game throughout the day. The hat trick of defensemen Taze Moore (21 points), Jamal Shead (18 points) and Kyler Edwards (15 points) could be lethal heading into the Sweet 16.

The Wildcats (27-7) return to the Sweet 16 after an impressive 71-61 victory over Ohio State. The strength of Coach Jay Wright’s team is experience, and Collin Gillespie epitomized it with his play in this contest. The senior shooting guard finished with 20 points and four assists, including a perfect 8-for-8 from the free throw line. Gillespie had a knee injury that kept him out of Villanova’s Sweet 16 finale last year, so he’ll be ready to try to advance the Wildcats in his final season. His senior teammate Jermaine Samuels added 17 points and eight rebounds.

The Cyclones (22-12) went 2-22 overall last season, including 0-18 in the Big 12. What coach TJ Otzelberger has been able to do in a short amount of time was marked by the Iowa surprise No. 3-seeded State Wisconsin 54-48 to reach the Sweet 16. What’s perhaps more impressive is the Cyclones’ ability to win when their two best players were terrible. Leading scorer Izaiah Brockington had 10 points on 4-of-15 shooting, while Tyrese Hunter, the Iowa State vs. LSU hero with 23 points, had just four points on 1-of-10 shooting.

The Tigers (28-5) really fell apart in the latter part of the season, marked by a 79-61 upset loss to No. 10 Miami (Fla.) in the second round. Coach Bruce Pearl’s team was a projected No. 1 seed in the NCAA Top 16 reveal in late February, but went 3-3 to finish the regular season. Jabari Smith shot 3-for-16 in the season-ending loss to Miami, and this team couldn’t do anything. Getting a No. 2 seed and not advancing to the second weekend is always a disappointment and this is the last for Pearl in charge of the Tigers.

The Horned Frogs (21-13) had Arizona on the ropes in an 85-80 scoreline that took some overtime to see the No. 1 seed advance. TCU barely played like a No. 9 seed and showed its strength in the inside, outrebounding Arizona 48-44 and getting big efforts from frontcourt players Chuck O’Bannon Jr. (23 points) and Eddie Lampkin (20 points). Coach Jamie Dixon had his team ready to go and TCU was in possession of a shocking upset in the second round.

Seeded No. 4, Fighting Illini (23-10) withdrew early from the NCAA Tournament for the second straight year, this time being dismantled by Houston in a 68-53 loss. Illinois’ offense cooled down again, and Illini went 6-for-25 from 3-point range, providing little perimeter production to complement All-American big man Kofi Cockburn (19 points, eight rebounds). Along with the missed shots, Illini’s offense was sloppy for the second straight game after barely avoiding a first-round upset against Chattanooga. Against Houston’s nationally leading field goal percentage defense, Illinois committed 19 turnovers and looked completely out of its element. After losing to Loyola-Chicago as the No. 1 seed last March, coach Brad Underwood once again has a disappointed fan base.

The Spartans (23-13) played inspired and had a well-executed game plan until the final five minutes of an 85-76 loss to Duke. Michigan State saw their five-point lead vanish at the critical moment, turning the ball over and watching the Blue Devils make key plays when it counted the most. However, it didn’t look like MSU was the No. 7 seed, as this team made 11 3-pointers, four of which came from Gabe Brown (18 points in the loss).

The Buckeyes (20-11) held on against a superior Villanova team, but just didn’t have enough to pull off an upset. Coach Chris Holtmann finally had his team in full force, but there was little production Sunday aside from rookie standout Malaki Branham (23 points, five assists) and veteran EJ Liddell (17 points, six rebounds). If this team had reached its potential earlier in the season, it might not have had such a tough second-round draw.

The Badgers (25-7) turned the ball over an unusual 17 times and shot poorly, including 2-for-23 from 3, in an upset loss to Iowa State in the second round. American shooting guard Johnny Davis wasn’t at his best, going 0-for-7 from beyond the arc to finish with 17 points. Since reaching two Sweet 16s in his first two years in Madison, coach Greg Gard has now failed to lead the Badgers to the second weekend of the NCAA Tournament in each of the last three appearances.