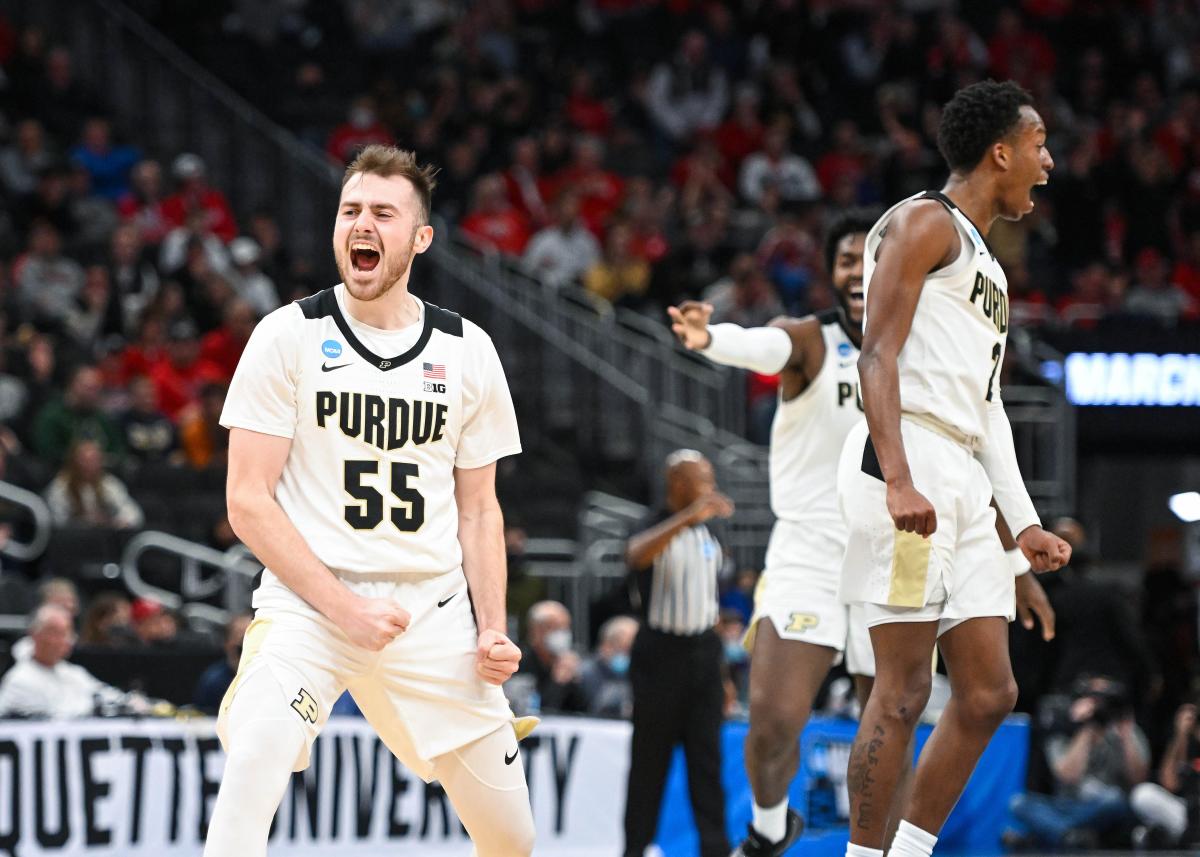 The talk after Selection Sunday focused on the selection committee favoring the Big Ten Conference, particularly near the bubble line, sending nine teams to the NCAA Tournament.

So far, the Big Ten has had mixed results, with convincing first-round wins by Purdue and Ohio State on Friday the latest of the conference successes. No. 11 seed Michigan stunned Colorado State to advance Thursday, while Iowa (annoyance over Richmond), Indiana (lost to Saint Mary’s) and Rutgers (lost in the play-in to Notre Dame) weren’t so lucky.

That makes the Big Ten 4-3. How will Wisconsin, Illinois and the state of Michigan hold out?

After a brilliant first day on Thursday, which saw three overtime games and four double-digit seeds pull off upsets, here’s a look at the winners and losers from Friday’s first-round action.

The No. 3-seeded Boilermakers (28-7) eliminated Yale early and didn’t look back for a 78-56 victory in which All-American Jaden Ivey scored 22 points. Coach Matt Painter has been on the wrong end of a support destroyer, with Purdue upset by North Texas as the No. 4 seed last year. This team had no Cinderella story and looked like a team with Final Four potential, advancing to the second round in the East Region.

The No. 3-seeded Red Raiders (26-9) defeated Montana State 97-62 to advance to the second round in the Western Region. This TTU team looks poised to make a deep run, sporting six players in double figures for this easy win that saw the Red Raiders shoot 12 of 20 (60%) from beyond the arc.

The No. 2-seeded Tigers (28-5) saw their SEC counterpart Kentucky lose to a No. 15 seed on Thursday but made sure to pull away from Jacksonville State late in the first half. Jabari Smith’s 20 points and 14 rebounds (including this tenacious nail) helped lead the Tigers to an 80-61 victory and a spot in the second round of the Midwest Region.

The Ramblers (25-8) were absolutely terrible offensively in a 54-41 loss to an Ohio State team that finally bounced back. Credit that to the Buckeyes defense or maybe a 1-for-10 shooting line from Loyola star Lucas Williamson, an original member of the Ramblers’ memorable Final Four team in 2018. He also went just 1-for-6 from the free. shooting line and OSU forced Loyola to commit 14 turnovers. It wasn’t an impressive debut for first-year coach Drew Valentine in the post-Porter Moser era.

The 15th-seeded Blue Hens (22-13) were no match for an experienced Villanova team that picked up another gear in the second half. Delaware would have had a chance to compete or stage an upset if they had thrown the ball well. Instead, the Hens went 3-for-20 from 3-point range (15%). Defensively, coach Martin Ingelsby’s group couldn’t hold up against ‘Nova shooting guards, especially Collin Gillespie and Justin Moore, in an 80-60 loss.

- Advertisement -
Share
Facebook
Twitter
Pinterest
WhatsApp
Previous articleThe traffic light is wobbly, something that the chancellor and the coalition must improve
Next articleBelgium wants to postpone the elimination of nuclear energy for ten years