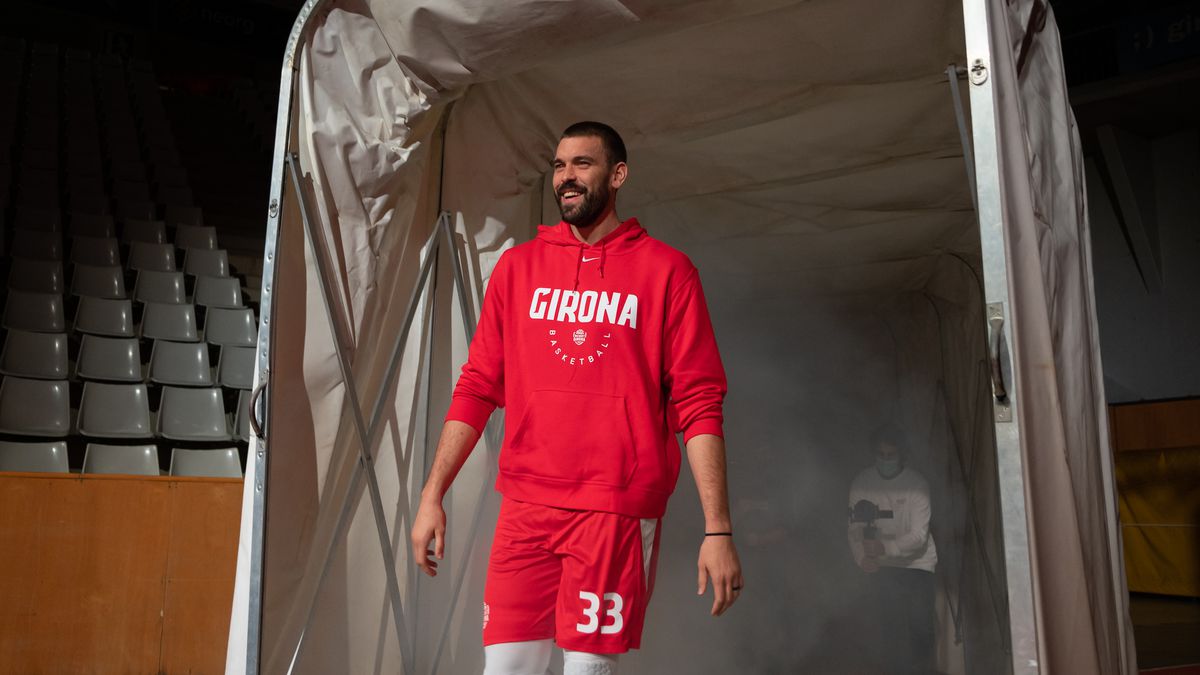 Although he has been attending the training sessions since September, Marc Gasol (Barcelona, ​​37 years old) said in the dressing room the night before as November drew to a close. “Guys, I’m joining the team,” he released, to the delight of Bàsquet Girona, then fifteenth in the table, and with some concern because the LEB Gold category was getting entangled. Since then, victories have accumulated and this weekend they play in the Final Four for promotion to the ACB League, in the semifinals against Lleida (this Saturday, 8:00 p.m.) and if it happens against the winner of Estudiantes-Palencia ( 17 :30 p.m.). Hours). Doubly so for Marc, as not only is he the center on the field, he’s also president of the unit he founded with the Memphis Grizzlies in 2014 while he was still in the NBA.

The days are short for Marc because he needs to express himself, because he knows when he will enter the Parque de la Pabellón Fontajau but not when he will leave the offices. “I wake up very early because I like the quiet of the first few hours when everyone is asleep, to visualize the day coming and prepare for meetings or training,” says Gasol; “What happens is that I spend a lot of time as a player because I’m getting older and it’s hard for me to oil the machine so the days after are too short for me.” There is no shortage of work, as each course improves on the previous one. He founded the club in 2014 with five teams (two children, two cadets and a junior) and now has 20, in addition to 3×3 basketball – which his brother Pau, vice-president of the club puts special emphasis on – and wheelchair. “We’re growing strongly as a unit,” he admits; “We started with the first team four years ago, they were promoted to LEB Oro in 2019 and we had 150 fans. Now we are organizing a Final Four where tickets sell out quickly and we have 400 people on the ground, in addition to 70 coaches,” the President proudly explains. However, it happens that he doesn’t act like one on the pitch.

“He manages very well to separate the presidency from the dressing room and we normalized that,” said forward Gerad Sevillano. “Because he’s president when he leaves the dressing room,” adds shooting guard Txemi Urtasun; “Which doesn’t mean we jokingly call him a prisoner from time to time or boss“. Point guard Albert Sàbat chimes in: “Even though he accepts and jokes, we don’t make too many of them because we respect him, do we? And admiration for everything he does for the club.” That’s how coach Jordi Sargatal sees it, adding a bit of humor: “Well, I can scold him… No, actually he’s one more from the start and when he puts on his work overalls , it is not the president, but that Marc Gasol is the player, which is not a little”. Although there is also the strange situation that they have to solve the bonuses in case of promotion – they have not yet completed them – where Marc Teil and Richter is “I’m sure it’s expanding,” commented the three players amused.

Climbing up is not an easy task, another challenge for Marc Gasol, a few months ago he played at Staples Center. “He’s one of the best players in the world,” confirms Sàbat. Here’s how to explain his career: after winning the FIBA ​​Eurocup with Akasvayu, being named Best of the ACB League in 2008 and beating Arvydas Sabonis’ record by being named MVP in 11 games, he began his career in the NBA with the Grizzlies. He was a three-time All Star (2012, 2015 and 2017), was the 2013 Best Defensive Player and won the 2019 title with the Toronto Raptors. He played 191 games with the national team and won the World Cup for the second time in 2019, as well as the 2009 and 2011 Eurobaskets, as well as the silver medals at the 2008 and 2012 Olympic Games and the Eurobasket 2007. Now, however, he travels all over Spain by bus and concentrates on the rise to the ACB. “It’s not comparable to an NBA Finals. But the older I get the more importance I give to the present because I don’t have many moments like this anymore, finals, competitions,” agrees Marc; “and mentally it’s the same to think about the details, about the effort, about the work that is ahead of you and enjoy it through sacrifice and effort”.

In the team, they trust him and his influence on the game. “He wasn’t in Melilla and we played that game pretty badly. Marc gives us cohesion, leadership and seriousness,” says Urtasun. “He gives us a lot of confidence in both attack and defence, bringing rigor and order, as well as covering up mistakes made by others. And on top of that, no matter who he is, he is not at all selfish and does not find it difficult for him to share the ball. Although it is clear that we are looking for him at key moments because he makes the difference,” reveals Sàbat. “He’s the flagship of the team,” adds Sevillano; “For his game and because he also helps us a lot in tactical discussions with his advice. He’s very intelligent and he’s going on.” His numbers are a testament to that, five times MVP in LEB Oro days, with 23 games total in 25.27 minutes, 14.8 points and 8.4 rebounds per game.

Two games remain to find out if Gasol will be promoted with Bàsquet Girona, although he is reluctant to reveal if he will continue to wear shorts next year. “It doesn’t depend on the result. I’m concentrating on playing and next week it will be another one,” he concludes. “When we’ve tested him, he throws balls out,” says Sevillano. “I hope you look forward to continuing. We’ll see after the weekend,” Urtasun added. “We’re not pushing him at the moment, but hopefully he’ll continue for many years to come because it’s great to have him with us,” emphasizes Sàbat. President and Pivot.

- Advertisement -
Share
Facebook
Twitter
Pinterest
WhatsApp
Previous articleBorrell offers to work with the UN to avoid a global “food disaster” due to the war in Ukraine
Next articleThe electricity price for regulated customers will fall by 18.5% this Sunday to 172.64 euros/MWh