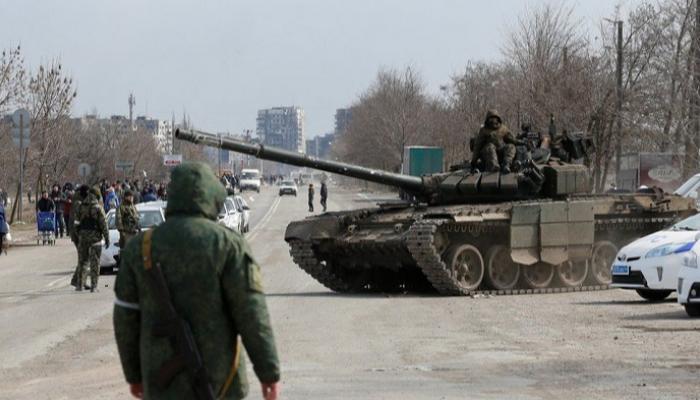 The Russian Defense Ministry announced that its forces were in “full” control of the town of Izyum, in eastern Ukraine, early Thursday, but kyiv did not respond to this news.

On the other hand, the Ukrainian Navy pointed out that it destroyed a Russian ship in the Black Sea, and there is no sign of a truce in the conflict a month after the start of the Russian operation.

It is noteworthy that the city, located in eastern Ukraine, has been under siege for days. And its population before the war was 48 thousand people.

The Russian Defense Ministry said 202 Ukrainian missile defense systems, 257 drones and more than 1,500 tanks and armored vehicles have been destroyed since the war began a month ago.

This information could not be independently verified.

The General Staff of the Ukrainian Army said today that Russia is intensifying its airstrikes, as more than 250 airstrikes have been recorded during the last 24 hours.

The Ukrainian side said that this number is more than 60 attacks compared to the previous day. The plane is primarily targeting areas in and around Kyiv, Kharkiv and Chernihiv.

The Ukrainian military said 11 “enemy air targets” were struck on Wednesday, including seven planes, a helicopter, a drone and two cruise missiles.

He noted that Russian forces in occupied areas such as Kherson use “terror” methods against the population protesting the occupation and are deploying the Russian National Guard to prevent protests.

Ukrainian police said on the Telegram app today that since the start of the Russian operation in Ukraine a month ago, 294 civilians, including 15 children, have been killed in the northeastern city of Kharkiv.

Police added that citizens rarely leave the shelters they take refuge in from attacks and fires break out in residential buildings, schools, hospitals and facilities.

It is noteworthy that before the outbreak of the war, 1.5 million people lived in Kharkiv. The Ukrainian military said the city had been repeatedly attacked from the air.

There were reports of violent explosions in the port of Berdyansk in southern Ukraine.

The Ukrainian Navy said a Russian landing ship had been destroyed, the Independent Information Agency of Ukraine reported. The ship is reported to belong to the Black Sea Fleet.

The Ukrainska Pravda newspaper posted images on its website showing the flames rising for meters and huge plumes of smoke.

The British Ministry of Defense said on Thursday that according to British intelligence, Russian forces suffered huge casualties in the war against Ukraine, prompting them to seek reinforcements.

“Russian forces almost certainly suffered thousands of casualties during their invasion of Ukraine,” the ministry wrote in a tweet.

For their part, senior US administration officials said the White House has formed a team of experts to draw up plans related to the possible US response if Russia uses weapons of mass destruction, whether chemical, biological or nuclear, during its mandate. invasion of Ukraine.

Russia has repeatedly raised the possibility of using nuclear weapons as it faces difficulties in the Ukraine crisis and defeats the Ukrainian military during a month-long war that the Russian government has described as a “special operation.”

The Kremlin said this week that such weapons would only be used in the event of an “existential threat”.

US officials have warned that Russia’s accusations that Ukraine may use chemical weapons are a lie that may be an indication Moscow might use them, given similar precedents.

The officials noted that the White House National Security Council sent an internal memo to security agencies and agencies dated February 28 requesting the formation of a strategic group to examine the major geopolitical changes occurring as a result of the invasion. Ukrainian Russian. Another team, known internally as the “Tiger Team,” is looking at possible forecasts for the next three months.

One of the officials said the strategic group was working “to monitor and mitigate risks while looking at how to move forward and defend US interests.”

The official added that this team is developing contingency plans for various scenarios and scenarios, including the possibility of Russia resorting to the use of chemical or biological weapons, targeting US security convoys, disrupting global food supply chains and ongoing response to the refugee escalation. crisis.

He noted that the team is also discussing the possibility of Russia using nuclear weapons. The official declined to speculate on the US response to Russia’s possible use of weapons of mass destruction, saying there would be a response.