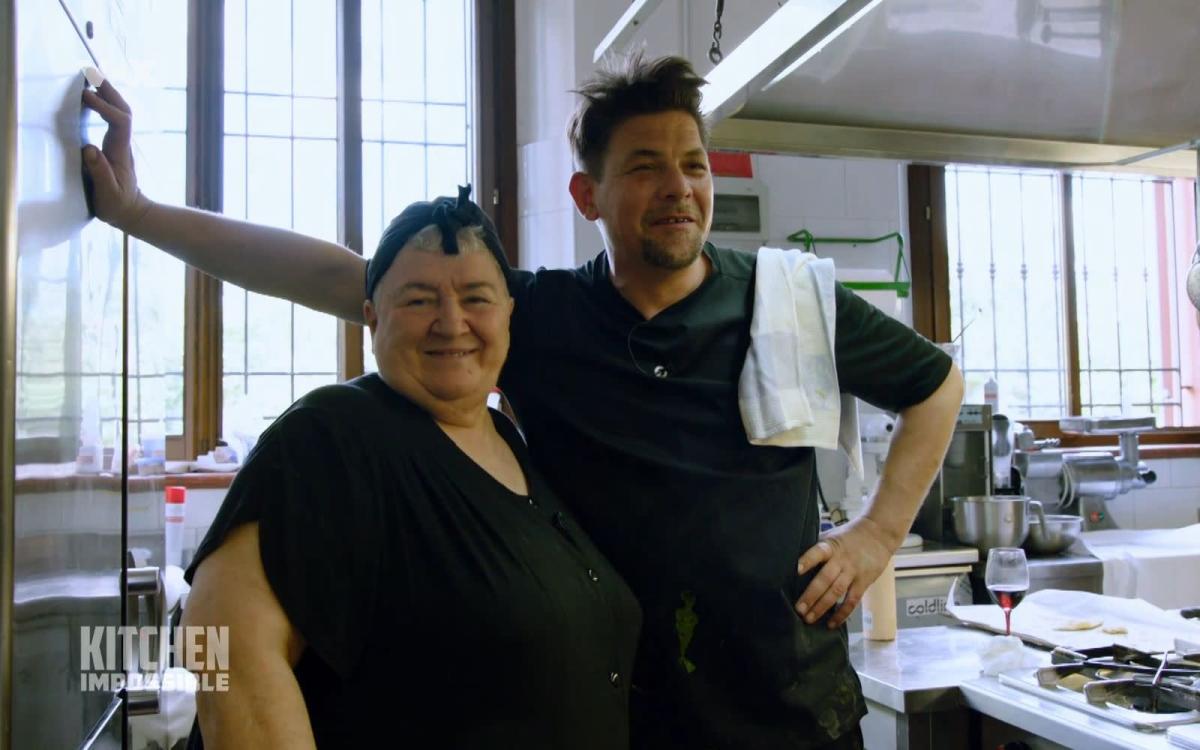 On VOX’s “Impossible Kitchen” there was a local derby: Tim Mälzer vs. Cornelia Poletto, Hamburg vs. Hamburg. “Now comes Poletto”, Mälzer rubbed his hands together. While she loved him immensely, he took advantage of her weaknesses…

In Cornelia Poletto, Tim Mälzer found an opponent with an ego just as big: “I always said don’t ask me because you can’t lose.” She’s too bad she’s been friends with the “Kitchen Impossible” star forever. Because that’s how she got to know her two weaknesses: Indian food and Nordic cuisine. Mälzer’s goal: to see the “blonde girl” swear. “Tim is and always will be a rat”, Poletto prepared himself for anything.

When she looked into the black box at the “India Club” Chicken Raj Kachori in Berlin, the chef scolded her: “That’s cheeky.” With that, Poletto’s chosen mode of expression disappeared: “But he’s a… hole.” Annoyed, she began to analyze the variety of Indian spices. Her solution: “There are also these ready-made spice mixes. I can also buy them at the supermarket.”

Original chef Manish Bahukhandi found it extremely strange that he bought onions by the kilo: “When I saw the onions, I was shocked.” Onions are absent from the entire plate. He was even more surprised by the finished masala spice mix: “That is absolutely forbidden in my kitchen!”

Mälzer wanted to pass on his own trauma from the tandoori oven to Poletto. Successfully. Because Poletto’s chicken skewer caught fire. She prefers to cook the rest in the oven. At least the soufflé dumplings worked. The verdict of the jury of ten regular guests: “He is more Italian than Indian.” Poletto scored 5.9 out of 10 possible points: “It was very hard.”

The second challenge in Saltstraumen, Norway was even more difficult. “My worst case would be if I had to make some kind of fire,” Poletto anticipated his fate. His horror awaited in the box: “Cod and some crumbs around it. And everything smells like smoke.” His daily schedule: fishing and making a fire, and all in the pouring rain. “Tim, I hate you,” Poletto trudged through nature in a rain suit, because there was neither a kitchen nor a building in the middle of nowhere. At least he had an old acquaintance by his side in the original fisherman and chef Brian Bojsen.

Poletto fillet cooked on moss, potatoes on a bed of seaweed, flatbread on a hot stone, and cod head: where Mälzer would have unleashed his bloody Tourette, Poletto kept his composure. “I completely take my hat off. Above all, for his composure,” praised Mälzer. Poletto defied all odds. In the end, he just missed the soy sauce. Mälzer: “You deserve all the points and more.” He announced 6.9 points, but admitted: “I think it’s very little.”

Poletto’s tit for tat was all too nice, because his assignment for maltsters in Switzerland was “a matter of the heart.” Medallion of venison in a trumpet wrap and capuns, a cabbage wrap dish from star chef Martin Dalsass, Mälzer found “not too good.” However, he missed the emotion: “I’m a bit bored. I can probably cook something like that.”

Poletto’s advice “Don’t think outside the box!” completely upset Mälzer. The original chef criticized his capun filling: “He thought it was a gnocchi dough. That’s where it failed.” Because it was spaetzle dough. Meanwhile, “Mr. Kitchen Impossible” celebrated his genius: “I’d say it was some of my best work on ‘Kitchen Impossible’.” The fact that they came out “only” 7.8 points instead of the expected 10 was mainly due to the strange consistency of the Capuns.

Mälzer just wants to please the cook: “I don’t care about the jury”

The second test in Modena then became a matter of the heart for Mälzer. It was love at first sight when she walked into Anna Maria Barbieri’s kitchen. “I’ve never been so surprised by ‘Kitchen’. I’ve never been so irritated,” she had to sort the loudmouth out of her emotions. In front of him was an Italian nonna, just as he had imagined her in her dreams.

Earlier you complained about the parmesan dish, which combines tradition with modernity. He even considered not cooking any of it at all. When he confronted the 76-year-old woman, her change of heart came: “I want to please her now, I don’t care about the jury.” Above all, her frozen Parmesan cream won Mälzer’s heart: “It was magical. Wow, that was good!” Puff pastry, chard and Parmesan pies and a fancy fish roll were also required.

Mälzer’s basil cream was a total flop: “I would have punched every single one of my students in the face. How stupid are you that you can’t even mix two ingredients together?” But his mind just snapped, “I wanted her to love me so badly.” Anna Maria laughed: “I heard Tim say that he is the best Italian chef outside of Italy. What a cute joker.”

However, Mälzer was sure: “I’ve never been this close to the original with everything – technology, taste, implementation, consistency – in all my life with ‘Kitchen Impossible’.” Nonna’s “Bravo, Tim” was worth more than 10 points. With only 7.6 points, the expected “legends” did not materialize. Despite this, Mälzer once again took the overall victory. Poletto knew why: “The sun shone for you too.”