Mahmoud Al-Mahdi reveals the reason for his divorce from Menna Arafa: “The call of his elders”. 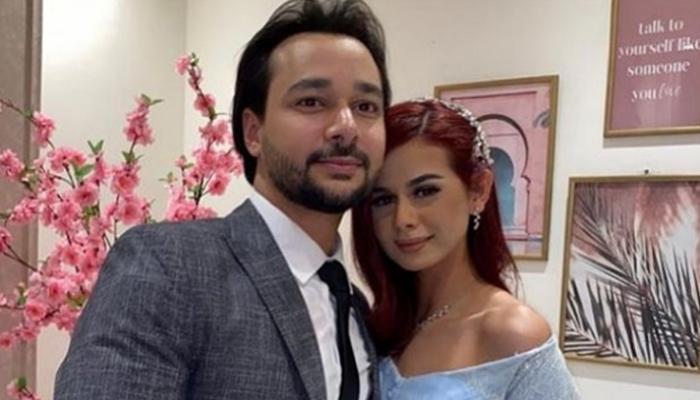 Egyptian actor Mahmoud Al-Mahdi revealed the reason for his separation from his wife, actress Menna Arafa, and the circumstances and scenarios that surrounded it.

Al-Mahdi Story wrote through his account on the “Instagram” website: “How many people did I meet who sold what I took from them and became famous? If you believe, at first I refused to let us advertise so that it would be like that” . I didn’t stop like this, until the movie came out, and the photos were leaked, and of course now, after what happened, they worked for me. Problems, I defended her when his biography came out, and I didn’t answer his boss and told her the truth. it happened. If he wanted to be famous, he would have acted like most.

He added, “Her senior was a big reason for the split. I was right next to her when she got a call from this person. The next few days will clarify some points of the call and I wish everyone in my life the best.”

And he continued: “Mena is the one who supported me the most, and what happened were circumstances beyond her control, and if anyone knew, she would excuse her. She is not to blame for what happened, the issue is between him and me. “

Mahmoud al-Mahdi had announced his intention to sue Dr. Ashraf Zaki, head of the acting professionals’ union, after he was described as a nobody on a television show.

Al-Mahdi wrote after the actors’ captain’s remarks: “Legal action will be taken from a person who sets himself up as a role model for art and actors, and no one is above the law and unfortunately no one will bear it. with me in this for the good of the interests… I see something wrong”.

Ashraf Zaki attacked Mahmoud Al-Mahdi after insulting artist Ilham Shaheen after she criticized his wife’s refusal to do one of the art scenes.

Ashraf Zaki said, during a phone call to the “Hadrat Al-Muwatin” program, on the Egyptian channel “Al-Hadath Al-Youm”: “There is a campaign to distort the Egyptian artist and soft power… This is the way of seeking fame. I mean, when do you attack an artist?! People’s reputation.. One is a nobody who wrote an artist against himself, insulting a great artist.. By saying that you are posing as an artist, there is no artist.

Mahmoud al-Mahdi had announced his separation from his wife, Menna Arafa, for the second time in early March. Al-Mahdi wrote through his “Instagram” account: “Separation occurred, praise God for everything, and our Lord guides her and grants me success.

For her part, the artist, Menna Arafa, unfollowed her ex-husband, Mahmoud Al-Mahdi, and deleted all the photos they collected on her Instagram account.

And Menna Arafa wrote through the “Astori” report on her “Instagram” account: “If we have a share in something, we’ll see, and if not, then the good is in what God has decreed.”

And he added: “O God, force my mind, you are its guardian, because nothing on earth or in heaven is impossible for you. Lord, explain my chest, comfort my heart, and remove from my heart all fear that resides in me, and every weakness that breaks me, and every thing that makes me cry, and don’t grieve me in my future, neither in me nor in the rest of my family, don’t make it difficult for me and open my closed doors for me.”