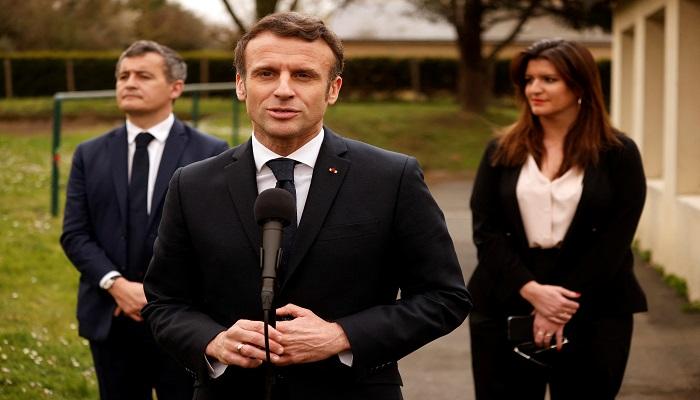 French President Emmanuel Macron on Tuesday proposed giving consular protection to a Russian journalist who launched a slogan protesting the attack on Ukraine.

Macron said he would speak to his Russian counterpart, Vladimir Putin, about consular protection for a Russian journalist facing a lengthy prison sentence after she waved a slogan live against the attack on Ukraine.

“We will begin diplomatic efforts to provide you with protection through the embassy or asylum. I will present this proposal directly to President Putin in my next talks with him,” Macron added.

On Monday, a woman who opposes the war in Ukraine broke into a news bulletin on Russian television, holding a banner with the words rejecting the Russian military operation in Ukraine.

In English and Russian, the journalist’s poster reads: “No war. Stop the war. Don’t believe the propaganda. They are lying to you here.”

As the announcer continued to read the bulletin, the protester’s voice was heard shouting: “Stop the war, not the war.” It appeared a few seconds before the screen changed to another report.

This position comes as the war continues into its nineteenth day, after a military operation launched by Russia on February 24 last.

In reaction to what the protester did, Kira Yarimsh, a spokesperson for imprisoned Russian opposition leader Alexei Navalny, wrote on Twitter: “Wow, that girl is amazing.”

And he posted a video of the accident, which quickly garnered more than 2.6 million views.

Although the end of the situation is not known, the Russian law, which was approved on the fourth of this month, considers public actions aimed at discrediting the Russian army illegal and prohibits the dissemination of false news, punishable by prison terms of up to 15 years. .