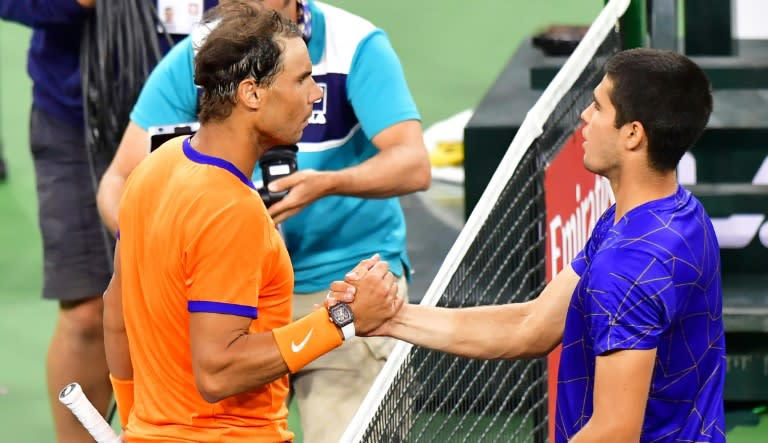 Alcaraz went toe-to-toe with the 21-time Grand Slam champion, taking the second set before succumbing, and the experience only increased his belief that he is ready to take his place among the game’s elite.

“I think I’m more mature than last year,” Alcaraz said. “Now I know how to play against these types of players. I played a lot of matches against great players. The second time against Rafa. I feel like I am part of that level.”

“I think I’m going to play a lot against Rafa or the best players this year.”

Alcaraz said before the semi-final that he expected it to be a very different match from his only previous meeting with his fellow superstar, when Alcaraz won just three games in a thrashing in Madrid.

“Like I said yesterday, this is going to be a different match than the first. Now I think I’m ready for the others.”

Alcaraz has been filling his resume with early achievements.

Last year he became the youngest man to reach the US Open quarterfinals in the Open Era and last month he won his second ATP Tour title in Rio de Janeiro.

So Nadal said he came into the match like he would any other high-profile semi-final.

“I treated him like I was playing against a top eight player. In terms of level, that was my feeling,” said Nadal, who believes Alcaraz has “all the ingredients” to become champion.

“He has all the shots. He can play very aggressive. He can play defensively because he is super fast,” Nadal said. “He can defend unbelievable balls. Of course, when he plays aggressive, it’s hard to stop him because his ball quality is so high.”

Alcaraz was quick out of the gate on Saturday, breaking Nadal in the first game and enduring a marathon run in the second game to take a 2-0 lead.

However, he said that he felt nervous at the beginning of the match, something that he thinks he will be able to control better next time.

“In the next half I will play calmer, more relaxed,” he said. “If you play with Rafa, you have to be calm, you have to think well in difficult moments. That’s what I learned in this match.”

After Alcaraz took a second set in which the winds whipped both players, Nadal went on the attack.

Although the bar was high from both players, Alcaraz, like many players before him, was ultimately unable to find an answer when Nadal forced action at the net.

“I thought I could beat Rafa in some moments. But Rafa has a thousand lives.”