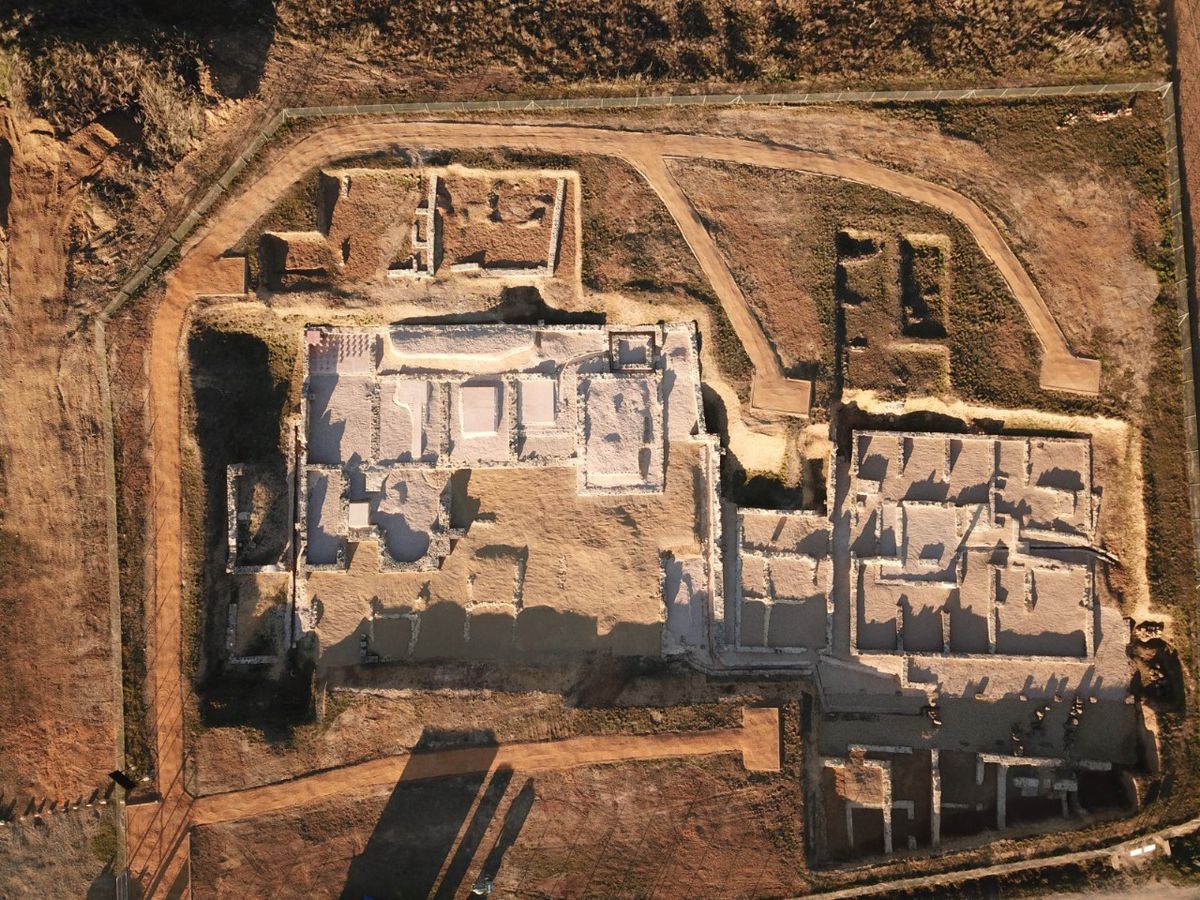 There was a time when the plan of the people of León in the area of ​​Villasabariego or Major Manila It consisted of looting the forgotten Roman site of Lancia. No one paid much attention to an ancient city where the Asturians resisted the troops of César Augusto more than 2,000 years ago. Imperial forces eventually subdued the local rebellion and settled in the city, but centuries later these ancient columns, settlements, and other archaeological pieces never ended up in the homes of area residents. This historical legacy has received renewed attention in recent years the Leon Institute of Culture, pending the Diputación, is working to revive this glorious past. The project involves the excavation of this old town and its transformation into a place of tourist and historical interest. For this they have the involvement of the surrounding residents, who bring back remains that they kept in their homes after their ancestors took them, while the León School of Trades replicated stones for free to imitate elements such as plinths and columns worn by the time . .

Located 15 kilometers southeast of the capital, León, the site has 100 hectares that must be analyzed in search of the legacy of the Romans who occupied this space after defeating the Asturians who inhabited the village. The head of the culture department of the Diputación and vice-president of the Leonés cultural institute, Pablo López, explains that the incomparable value of Lancia lies in how the invaders coexisted with the architecture of their predecessors in the peninsula, during the four centuries that Lancia depended was upon Rome how the occupation produced baths, palaces and markets, the remains of which can be seen both from the ground and from the air. “The first excavations took place in the 19th century, there was also work in the 20th century and especially in the 1960s, but they were unprotected, apart from the fact that in the 1990s the young people went to dig and found many remains says López, highlighting that the Diputación addressed the site in 2019. Until then, metal detectors and amateur archaeologists have devastated this cultural heritage. Since then, with an investment of 2.5 million euros, they have bought plots of land from individuals to study them further and the Lancia areas have been differentiated with gravel of different colors, in addition to the consolidation and restoration of the finds.

An example is the recovery of a monolithic column that was kept in the Diputación until it was revealed that it belonged to this mythical city and was returned to its origin. Decades of mistreatment is even reflected in the fact that infrastructures such as the road that connects León to Valladolid have been partially built on this land, causing the loss of many valuable elements. The coordinator of this facility that carries out the advances, Emilio Gancedo, highlights the simple improvements that make it possible to visit these ancient treasures: “We want to bring them back to the place they deserve, we have started to improve access to put up explanatory panels and create accessible corridors.”

The link between times has made young Daniel Sánchez, 23, the guide for those interested in this complex. The art historian from the University of León, who is pursuing a master’s degree in European culture and thought towards a doctoral thesis, combines his education with the dissemination of this heritage. “Lancia is one of the most important archaeological sites in the province, located between the Porma and Esla rivers and the towns of Mansilla Mayor and Villasabariego, it is a large site where pieces dating back to the Palaeolithic have been found” , states the guide , a fellow of the Leonese Institute of Culture, who estimates its relevance “during the second Iron Age of the Iberian Peninsula in the Asturian sphere of influence”. In the year 25 BC The army of Publio Carisio conquered this settlement during the wars of the tribes of the north of the peninsula against the Romans and it was renamed throw either Civitas Lanciensis. Sánchez points out that the victors didn’t level it, but kept it as a symbol of their victory and began to build on it. The most important remains that survive are the foundations of a central part of the Roman city: the baths, the market, corrals, storehouses and some dwellings, “although there are many other excavated sites scattered over a large area”. “The last big find, the city forum, is still being excavated,” adds the historian, because this is the major goal of those responsible for revitalizing the city.

The process of restoring the splendor of this area has motivated the town’s craft school, which has a stone carving workshop and uses original Boñar limestone to carve new pieces to replace the lost ones. The initiative surprised those responsible for Lancia’s salvage, who also welcome the fact that, according to López, “people have offered materials that were found with detectors at the time and that they guarded in their homes, there are hundreds of pieces in the cities, people are aware of this and want to give back the heritage. The coordinator of this Leonese institute, Emilio Gancedo, points to “the epic story of Lancia” as the main argument to commemorate this “cruel fight between all the Asturian tribes against the Romans as in the Asterix comics”.

One of the most important tasks has fallen to Daniel Sánchez, who is responsible for informing the public about Lancia’s milestones. The historian from Sanabria (Zamora) has lived in León for six years and, as an adopted son, feels “proud to give Lancia the importance it deserves, it is a very precious Roman city”. Those who come to the site and see the advances and new discoveries there have a guide who is happy to tell them everything he knows: “To have the opportunity to help and teach people everything that this city was, is a joy.”