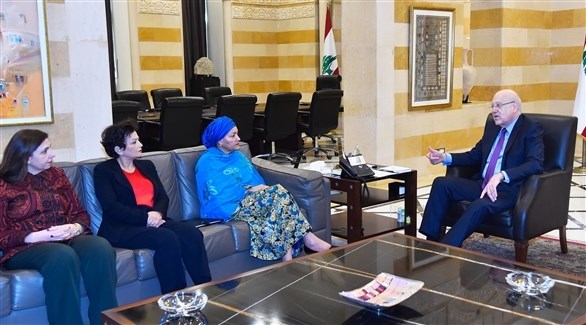 The Lebanese Prime Minister, Najib Mikati, asked the Deputy Secretary General of the United Nations, Amina Muhammad Sabah, during his meeting with her on Tuesday, to support his country in the food security file, according to the United Nations plan to face the repercussions of the war in Ukraine in all countries.

The meeting was attended by the United Nations Resident Coordinator in Lebanon and Humanitarian Coordinator, Najat Rushdie, and the United Nations Deputy Secretary-General and Executive Secretary of the Economic and Social Commission for Western Asia “ESCWA” Rola Dashti, according to a release. issued by President Mikati’s official website.

Mikati also asked “the UN official to support the United Nations for Lebanon regarding the anti-corruption program and the recovery of public funds, since Lebanon is one of the countries that signed the program.”

It is noteworthy that on February 24 Russia launched a “military operation” in Ukraine that continues to this day. Since Ukraine is among the world’s grain sources, followed by Russia in second place, the conflict may cause prices to rise.

Since November 2019, Lebanon has been witnessing a financial and economic crisis that places it among the ten worst global crises and perhaps one of the three most severe crises since the middle of the last century, according to the World Bank.