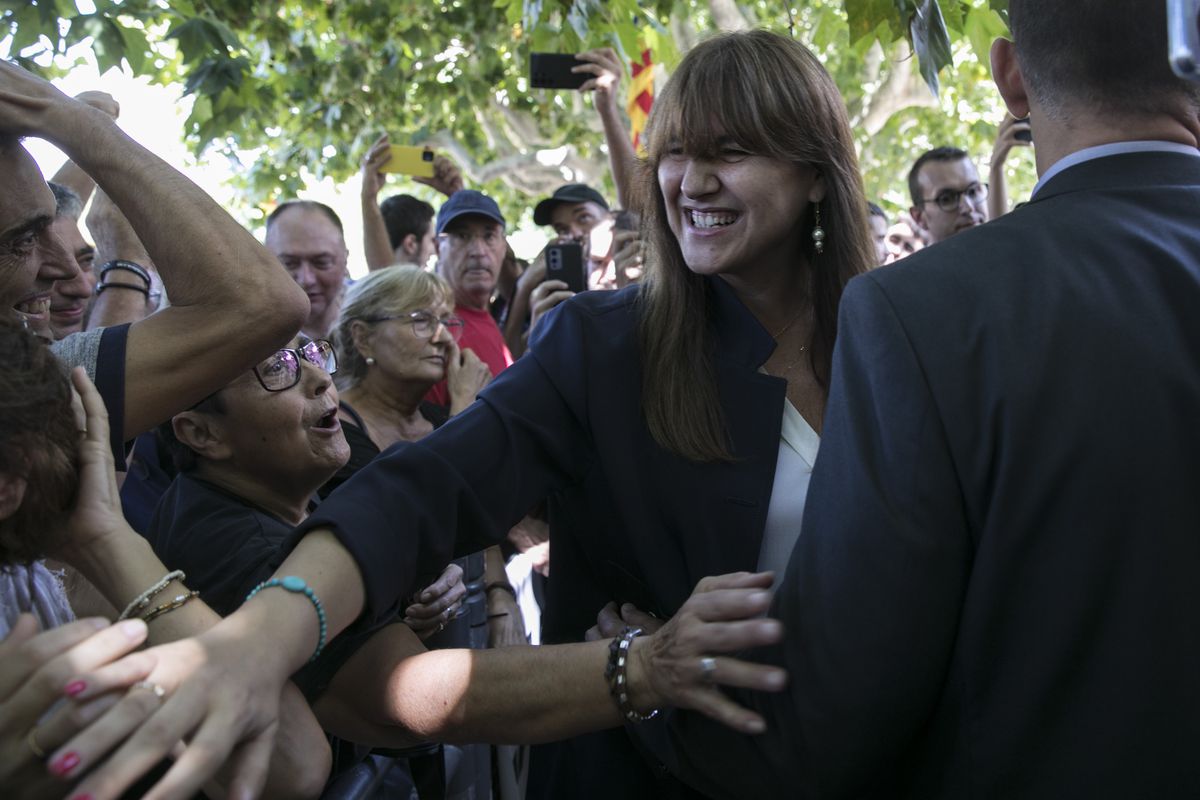 Laura Borràs is no longer President of the Catalan Parliament. Only Junts per Catalunya, his party, supported the Parliament’s special article suspending MPs who are about to open a hearing on a related corruption case at the Chamber Table session this Thursday afternoon. The ERC, CUP and PSC consider that the Borràs case of splitting public contracts in the alleged benefit of a friend (and for which he is accused of subterfuge and falsehood) is grounds for termination and have voted in favor of automatic suspension. The interim president is Republican and former Health Minister Alba Vergès. While the governing body meeting was being held this morning, a demonstration in support of Borràs was taking place outside the gates of the Catalan Chamber, around 400 people.

The meeting began with a speech by Borràs, who is unable to vote due to an apparent conflict of interest. He then left the meeting to allow the rest of the table to deliberate without his interference. The PSC has two votes, the ERC two more and the CUP one. The one left by Junts in the absence of the presidency is that of Aurora Madaula.

The table’s session had the Borràs file as its sole item and was convened after the Supreme Court of Catalonia opened a hearing against the president last Tuesday. She is accused of the crime of subterfuge and documentary falsehood for allegedly sharing contracts from the Institució de les Lletres Catalanes to give to an acquaintance. She defends that she has not committed any crime and that the actions she is accused of do not fall under the criminal category of corruption.

The meeting of the table has aroused strong media expectations. The President entered the room to be applauded by her most loyal staff. The deputy Francesc de Dalmases and the former president Quim Torra was in the small group that included Borràs’ daughter, who accompanied the junt leader to the door of the room where the political future of the junt leader was settled. Borràs had said weeks ago that he would not resign from office because he was innocent, ignoring not only the opposition but also some voices from his party.

The suspension of Laura Borràs has a direct impact on her political career (she keeps the minutes but has no deputy rights and does not receive a salary), but also has full repercussions on the dynamics of Parliament. Even if the upcoming summer break avoids urgent burdens to find a replacement for him, the power vacuum makes for an uncertain scenario at the top of the parliamentary administration. There is no precedent for a similar case and the door is being opened for a new clash between Junts per Catalunya and Esquerra. Borràs was appointed sixteen months ago thanks to the governing pact between the ERC and Junts, according to which the two parties shared the presidencies of the Generalitat and Parliament.

In the constant tug-of-war that both formations maintain, Borràs was not characterized by a spirit prone to agreements and did not miss an opportunity to criticize the gestures that, according to her, undermine the challenges on the map of independence. He disapproves of forums like the dialogue table and distrusts the approaches of Pere Aragonès and his government advisers. A philologist by training and addicted to epic language, she has shot at both Esquerra and the CUP, accusing them of weakening the “unity” of independence. At 4:00 a.m. this Thursday, he posted a message about struggle and surrender on his Twitter account.

Esquerra will be a key player in the struggle to reorganize Parliament’s powers. The party holds the first vice-president of the chamber, Alba Vergés. According to the statute of the institution, the powers of the presidency fall to number 2 in the absence of the incumbent. The former health minister states that she has no intention of keeping Borràs’ job and Esquerra assures that she will honor the commitment made at the time with Junts regarding the Distribution of powers will be retained. That means a new plenary session must be held to choose who will fill the vacant position, and the government’s two partners would have to rearrange the table for Junts to continue the presidency. Borràs wants an empty chair.

Whoever assumes the presidency of parliament has a chance to earn a prominent place in the grievance list of the junts leader’s unconditional supporters. This Thursday, the baptized Borràs “support group” called a rally outside the gates of Parliament to protest the dismissal. About 300 people launched proclamations in favor of what they believe to be the “legitimate president.” They ducked behind a banner that read, “It’s not justice, it’s revenge.”

It remains to be seen how Borràs will react to his fall. “It is time for Parliament to stop being a monarchy,” said En Comú Podem MP David Cid. “Those who want me dead must kill me and get dirty,” she warned this week.

- Advertisement -
Share
Facebook
Twitter
Pinterest
WhatsApp
Previous articleSamsung Galaxy S23: Qualcomm boss fuels rumor about future of Exynos chips
Next articleMañueco replies to Robles: “If it bothers you that the UME works in Castilla y León, you just have to say it”