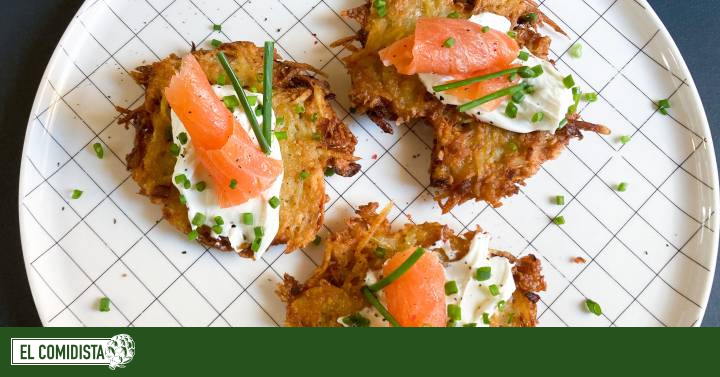 Latkes aren’t exactly a novel dish: in their current form, Ashkenazi Jews consumed them from the late 19th or early 20th century. However, these potato and onion pancakes seem to be enjoying an expansion these days thanks to social media, which is unsurprising given their appeal: You see a picture of a latke on Instagram and it’s hard not to feel a certain need to try.

At best, latkes are crispy on the outside and mushy on the inside. Its basic ingredients list isn’t long (potato, onion, egg and little else), however allow access for others without major problems, are spices, herbs or vegetables that replace the potato in whole or in part (see carrot, zucchini, sweet potato or turnip). Preparing them is easy, but you need to follow certain rules so that no mushy ones remain. If you want to know what they are, watch the video above and follow our recipe.

If you make this recipe, share the result on your social networks with the hashtag #RecipesComidista. And if it goes wrong, complain to the Cook Ombudsman by sending an email to [email protected]