Lapid justifies himself from power against Netanyahu 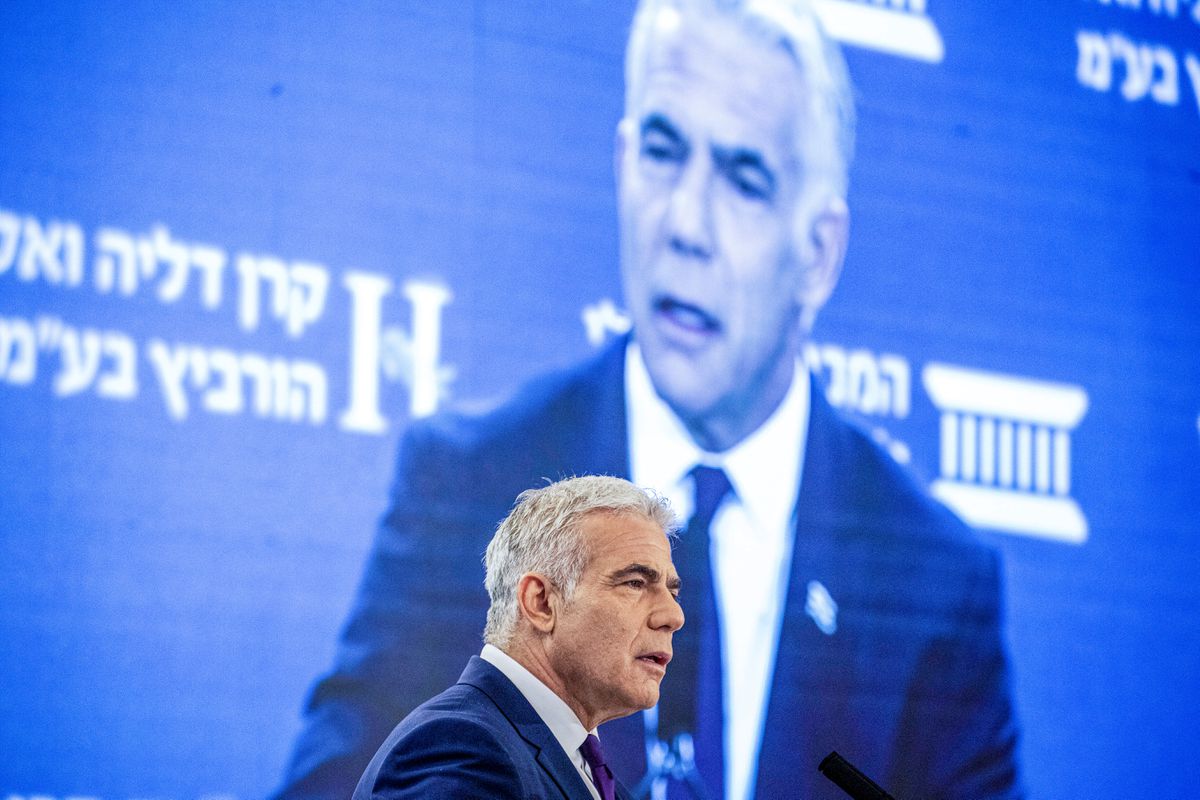 The unusual magnanimity of his resignations in favor of other political allies seems to have finally been rewarded. It has taken centrist Yair Lapid, leader of Israel’s second largest party and acting prime minister since Friday, a decade to achieve leadership of the Jewish state, albeit provisionally. Having parked a stellar career in journalism, his political career has been marked by sacrifice. In 2019, he resigned to hand over leadership of the center to Benny Gantz, then a former general with no government experience and now Secretary of Defense. In 2021, he handed over to Naftali Bennett the post of chief executive, which equaled him by number of seats in the alliance of forces he himself forged. But this ultranationalist partner has thrown in the towel in the face of the disintegration of his own party, which has left the most heterogeneous coalition in Israeli history in the minority.

The tenacity of 58-year-old Lapid, considered one of Israel’s most charismatic leaders, is now being validated in a privileged position. From the prime minister’s official residence in Jerusalem, he is preparing to challenge the hegemony of conservative leader Benjamin Netanyahu, 72, the longest-serving prime minister (14 years) and with whom he already has it, in this fall’s election was defeated six times by elections.

The famed TV presenter and columnist, on a spurt of popularity, catapulted the party he had just founded, Yesh Atid (There is a Future), as the second force into the Knesset (parliament) in the 2013 general election, surfing a wave of business protests for youth. Netanyahu had no choice but to bring him into his coalition as finance minister, despite his acknowledged lack of economic knowledge. He got rid of him two years later in a new ballot.

The experience of managerial failure and electoral setback, as well as seven years of traversing the opposition wastelands, gave him the wisdom to work with ease in the Knesset, one of the most fragmented and Cainist legislative chambers in the world. . Likewise, defeat and marginalization have smoothed his frivolous appearance as amateur boxer, crooner and occasional actor to outline the figure of a statesman who is groomed for a year as chief of diplomacy, a position he will continue to hold. Additionally, a leader who places team cohesion above his own personal projection is a valued rarity in political activity, particularly in Israel.

Contrary to the usual electoral strategies, which focus on the defense and security of a state that feels existentially threatened, Lapid seems to be banking on a day-to-day campaign. Without neglecting the danger posed by Hamas’ presence in Gaza; Hezbollah in Lebanon and the Guardians of the Iranian Revolution in Syria aim their message to focus on the skyrocketing cost of living and high housing costs in one of the countries ranked as the most onerous by business magazine scales. And above all, to present himself as a champion “before the forces that threaten to transform Israel into an undemocratic nation,” a thinly veiled reference to Netanyahu. His critics have accused the former Conservative Prime Minister, who is only trying to continue in politics to save himself from his trial, of corruption.

Born and settled in Tel Aviv, in a secular and informal environment at the far end of Jerusalem’s religious austerity, the new acting prime minister is the son of Tomy Lapid, a Holocaust survivor who immigrated to Israel from the former Yugoslavia and who practiced medicine also journalism and became a minister. His mother is a renowned literary author related to the owners of one of the most important Hebrew newspapers. Although he dropped out of school, he trained diligently in the editorial offices of newspapers and television stations. He completed his military service 40 years ago as a correspondent for the newspaper of the armed forces when they invaded Lebanon.

A radical reformer with social-democratic streaks on the economy and conservatives on security, Lapid draws inspiration from French President Emmanuel Macron’s program for overcoming the dialectic between traditional parties, which he plans to visit next week on his first trip to the outside world. His reference in Spain was Ciudadanos, a party that sponsored his visit to Parliament to expose his opposition to the pro-Palestinian Boycott, Divestment and Sanctions (BDS) campaign against the Israeli state.

One of its hallmarks is extreme secularism in a country that describes itself as a Jewish state. In his first public act after formally handing over power, instead of covering himself in the traditional kippah (religious round cap) and praying in front of him, he went to Jerusalem’s Holocaust Museum and Center on Friday to pay tribute to his relatives who were annihilated by Nazism Western Wall, as is customary among new Israeli leaders. His opposition to the imposition of the secular majority by the ultra-Orthodox Jews (12% of the population) was one of his political banners. In 2014, while in government, he promoted the induction into military service of students from the yeshiva (rabbinical schools) from which they were exempted.

Immediately after the vote, I went to the Knesset @yadvashemthe World Holocaust Memorial Center.

There I promised my late father that I would always keep Israel strong and able to defend itself and protect its children. pic.twitter.com/40LsrF1TYJ

After years of hosting a top notch weekend TV show and writing hundreds of columns in the Hebrew Diary Yedioth Ahronoth, Lapid’s well-known chiseled face and gray hair, which are the most common, are associated with the figure of a political leader in Israel today. The impact of his popularity on society is similar to that of Netanyahu, a veteran leader who has dominated Israeli politics for the past three decades. He has also shed his usual casual black attire on screen to don the garb of a statesman in the chanceries of the world.

Favorable for the two-state solution

Lapid is the first prime minister since 2009 to advocate a two-state solution to the Palestinian conflict. He is expected to take a more moderate and positive stance than his predecessors Netanyahu and Bennett, opposing negotiations with the Palestinians and endorsing the expansion of Jewish settlements in the West Bank and East Jerusalem. But it is not foreseeable that he will be able to make any progress in the peace process, as his hands are tied by the restrictions of his interim government. On Iran, it will maintain its frontal rejection of the 2015 nuclear deal between Tehran and the major powers, which the US and EU are now seeking to reactivate after the suspension dictated by Donald Trump in the White House in 2018.

Also for the first time since 2009, Netanyahu will not be in power in the next election campaign of the conservative Likud, the party with the most seats in the Knesset. Lapid’s move to remove him from office a year ago, to forge a heterogeneous eight-party coalition with the precedent of an Arab party, and the internal pacts he signed with Bennett have landed him as prime minister ahead of the campaign .

His projection will not stop growing in this new position, despite the limitations of exercising it in functions. In two weeks he will receive the President of the United States, Joe Biden, in Jerusalem as part of his tour of the Middle East. And on the eve of the November 1 elections, it will be he who addresses the world on behalf of Israel from the United Nations General Assembly tribune, a role in which younger Israelis know no other protagonist than Netanyahu.

“We don’t need any major constitutional reforms in Israel,” Lapid said, anticipating the essence of his program last week after the failure of Bennett’s coalition had already been announced. “What we need is to restore unity and prevent the forces of darkness (of Netanyahu and his ultra-Orthodox and far-right allies) from blowing us up.”