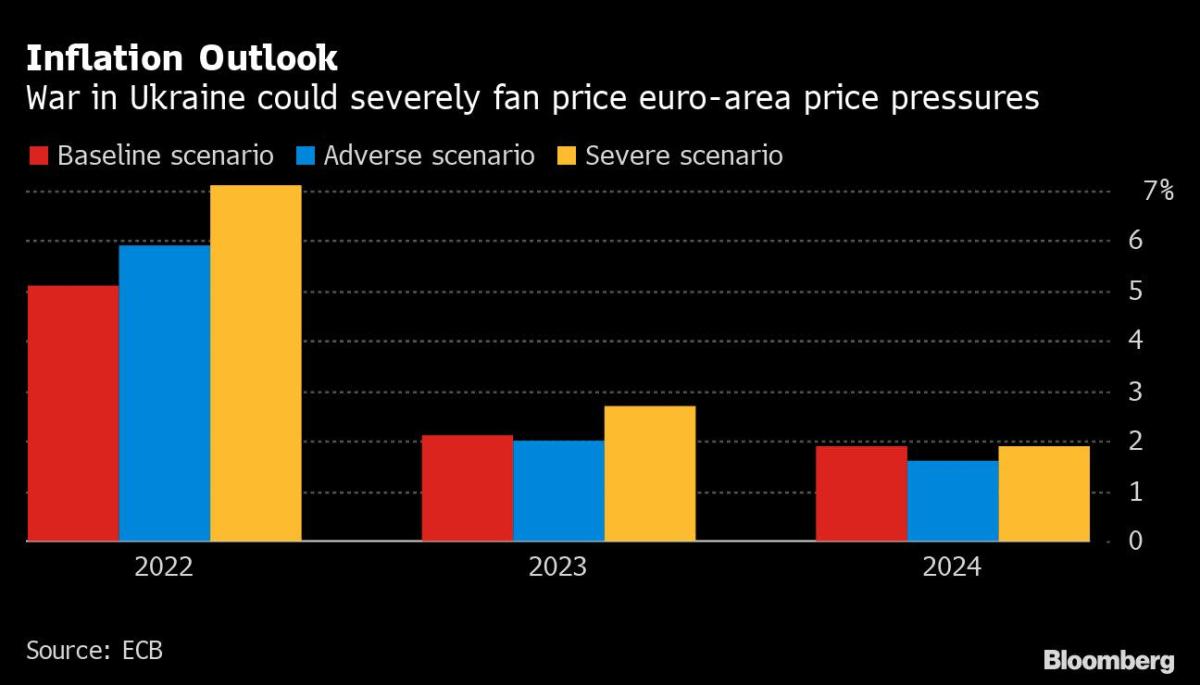 (Bloomberg) — European Central Bank President Christine Lagarde emphasized the ability of monetary policymakers to alter course if necessary, as there is a risk that Russia’s war in Ukraine will set in motion “new inflationary trends” that may take some time to emerge.

Lagarde told a conference in Frankfurt on Thursday that the ECB is “aware” of the risks ahead and is ready to revise its plans if incoming economic data so requires.

We are increasingly confident that inflation dynamics in the medium term will not return to the pattern we observed before the pandemic. “But we must manage a shock that, in the short term, drives inflation above our target and reduces growth.”

The ECB is grappling with the challenge of protecting the eurozone economy from the fallout from Russia’s invasion of Ukraine while also taking steps to contain record inflation. Last week, the bank surprised investors by announcing a faster removal of stimulus while allowing itself more flexibility around when to raise interest rates from record lows.

Pablo Hernández de Cos, member of the Governing Council of the ECB, also noted this week that the gradual recovery after the pandemic will be affected by the conflict in Ukraine. Bundesbank President Joachim Nagel said he does not expect a stagflation scenario, even if the fallout from the war drives up inflation and dampens growth.

Saying the Russian invasion has “cast a shadow over Europe”, Lagarde suggested fiscal policy “can help cushion” the adverse effects on economic growth, though she said the inflationary impact resulted from the nature of government support.

In a report released on Thursday, the OECD said a targeted fiscal boost of 0.5% of gross domestic product could help cushion the fallout from the conflict in Ukraine without increasing price pressures. He estimated that the war could wipe out more than 1 percentage point of global growth this year.

Eurozone governments are rapidly devising measures to contain the burden on businesses and households, with plans ranging from discounts on gasoline in Germany to tax breaks in Spain. France announced new expenses and will reactivate tools used during the pandemic.

Updated ECB projections released last week showed slower economic expansion and faster inflation in 2022, while price growth is estimated to moderate to just below the 2% target in 2024. But the outlook remain uncertain as the repercussions of Russia’s attack are still unfolding.

A dire sign was released on Tuesday with Germany’s ZEW index as investor confidence in Europe’s largest economy plummeted to the lowest level since the start of the covid-19 pandemic.

Revised inflation data for the eurozone released on Thursday showed prices rose slightly more than initially estimated in February, rising 5.9% from a year earlier, largely due to increases in energy costs.

Lagarde said the ECB would take whatever steps it needed to ensure price and financial stability. That could include new instruments to ensure the transmission of monetary policy, he said.

- Advertisement -
Share
Facebook
Twitter
Pinterest
WhatsApp
Previous articleBecause it asks for a fair distribution of burdens when it comes to accepting refugees
Next articleGEFA BANK, part of Société Générale, relies on DXC technology on its way to the public cloud