King of Jordan: Stability in the region requires resolving the Palestinian problem 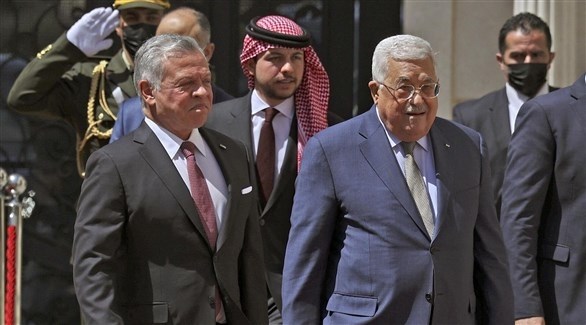 Jordan’s King Abdullah II said during his meeting with Palestinian President Mahmoud Abbas on Monday that stability in the region requires resolving the Palestinian problem.

After his meeting with Abbas in Ramallah, according to the official Palestinian news agency, the Jordanian monarch stressed that Jordan “will always stand with the Palestinian brothers and their rights, and we are with you constantly, despite all the challenges.”

He said: “The region cannot enjoy security and stability without a just and comprehensive solution to the Palestinian problem on the basis of a two-state solution that guarantees the establishment of an independent Palestinian state on the 1967 borders, with East Jerusalem as its capital. .”

He stressed the need to “stop all unilateral measures, especially in Jerusalem and Haram al-Sharif, that impede the chances of achieving comprehensive and lasting peace in the region, which is our goal for all of us to live in an independent Palestinian state.” “. in peace and security alongside Israel.

He stressed that Jordan continues its efforts to preserve the legal and historical status quo in Jerusalem, and to protect and care for the Islamic and Christian holy sites in it, under Hashemite tutelage.

For his part, Abbas said: “It is a great honor for us that His Majesty the King visits us. We are happy to see him in his second country, Palestine, to discuss many issues and continued consultation with each other on them. We are interested in permanent communication, either through visits or contacts between us”.

He stressed: “We never forget that the Jordanian position on the Palestinian issue is a Palestinian position, and we know that His Majesty’s instructions that everything related to Palestine is not reviewed, but implemented immediately.”