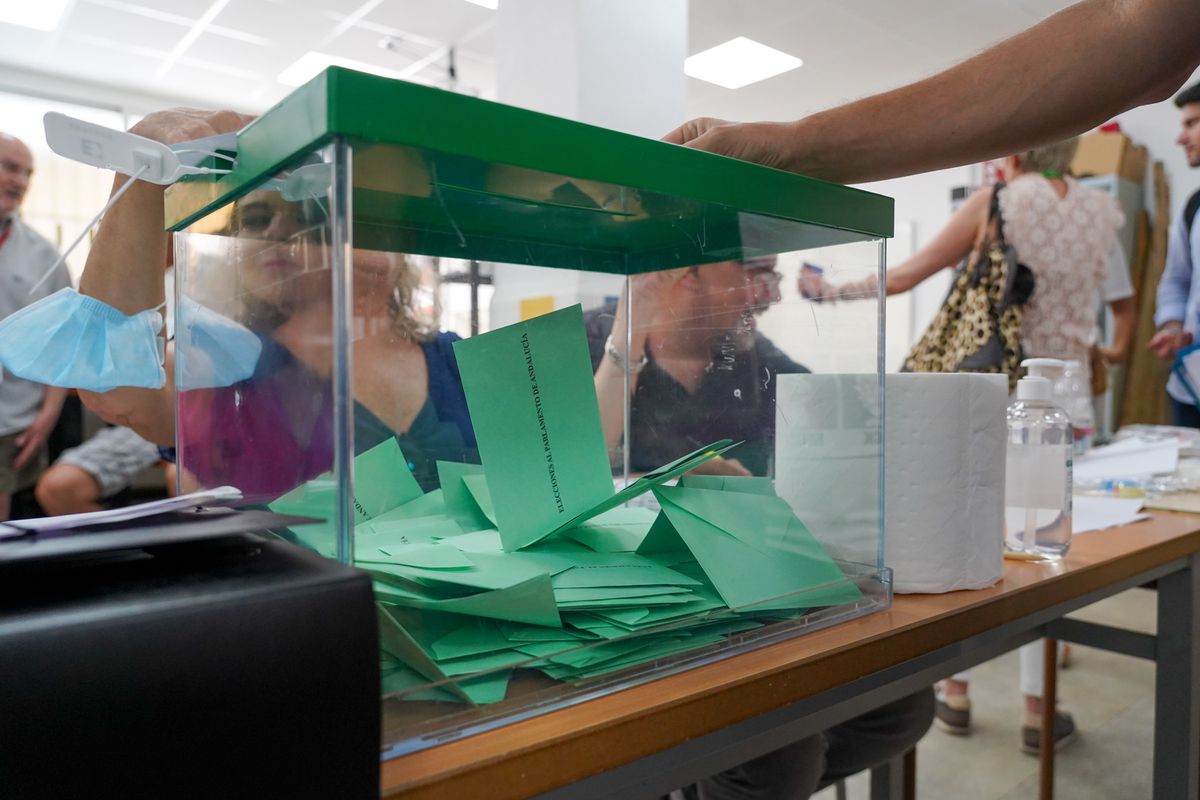 Although the drop in temperature this Sunday has left a heatwave in absolute calm all week, the uncertainty of knowing whether the sea breeze has had a deterrent effect on voters has toured the Andalusian polling stations in the first hours opening at nine. If the car caravan that was traveling in both directions of the A-49 before noon, the one that connects Seville to Matalascañas and other places on the Huelva coast – where Sevillians usually flee to protect themselves from the high temperatures – can than a symptom one might conclude that Andalusians have one eye on the polls and the other on the beaches. However, in Andalusia’s elections, 34.14% of voters had gone to the polls by 2:00 p.m. this Sunday, according to the regional government, an increase of 4.3 points compared to the 2018 elections.

For the people of Granada and Seville, by the way, this is the end of a bridge, since they had an official holiday in their respective capitals on Thursday with the celebration of Corpus Christi. In Granada, many families have done exactly the opposite of what PP re-election candidate Juan Manuel Moreno called for when he appealed to Andalusians to vote first and then go to the beach to avoid possible traffic jams on the way back time at your polling station.

Carlos Cano (28), Paola Martín (26) and María Martín (25) just lay down on the sand early in the morning on the beach in Salobreña, the electoral city of Vox list chief Macarena Olona. The three assure that their plan is to spend part of the day at the sea and then go to the polls. Cano plans to head to Malaga after his siesta for a last-minute vote. María says she will do it before dinner and Paola still doesn’t know exactly when.

Like Cano, many of the bathers at Salobreña will hold out in the sun until after they’ve eaten. Alfonso, 49, has traveled from Jaén with his family to spend the weekend and estimates he will be back around 7 to have enough time to shower and vote.

Álvaro and Marisa didn’t want to rush so much. “We decided to return from Isla Antilla yesterday [Huelva] to avoid traffic jams and because the temperatures would drop and with so much cold it’s not so good on the beach,” explains this Sevillian couple, who went to vote at the stroke of 12 at the Nuestra Señora de los Reyes school, in the center of the Andalusian capital .

Flip-flops, umbrellas and sun loungers are mixed with ballots in Malaga and Cadiz. At the public school of Gibraljaire in the working class district of Miraflores de los Angeles in Málaga – the traditional stronghold of the PSOE – around 30 people waited for the school doors to open at nine in the morning.

“I can’t remember an election where so many people were waiting to vote,” admits Sonsoles, a neighbor, “but with the heat that will prevail today, many preferred to get up early.” Macarena has come with the beach bag on his arm and the towel sticking out. “Look, I have my sunscreen, my fan, my sunglasses and my ballot here ready… I didn’t want to waste time,” said this woman from Malaga, ready to enjoy the sea and “the beach bar” in Pedregalejo, where I am must rest”.

The beaches of the capital Málaga are presenting “an almost full house” this Sunday, some of the lifeguards who ensure safety in La Malagueta have declared: “I will go to the polls when I finish work here at five in the afternoon” , said Juanjo, lifeguard there on the coast of the Costa del Sol. On this day, many shops, especially supermarkets, are open until at least three in the afternoon. “When I have time, I vote, and when I don’t, I don’t do anything because, to be honest, I don’t feel like it either,” explains a cashier who tends the line of customers doing their Sunday shopping.

If the atmosphere in the historic center of Malaga in the morning, there was a lot of movement of tourists walking the streets and not noticing the election day in Andalusia – the terraces of bars and cafes were filled with English, German and French. “I didn’t know people were voting here today; I enjoy the sun, these streets and the wonderful food you have,” explains George, an American tourist – in the capital of Cádiz, foreigners have encountered voters, the Corpus Christi parade and even chirigotas rushing in for the final parades of carnival. And it is that Cadiz went to the polls with the uncertainty that so many recreational events, to which we must add the day at the beach, would reduce the number of votes.

“I suppose that those who are aware of this, in the end, realize that they are going to vote,” assured Vicente Quiño after picking up his daughter Sofía, dressed for her first communion, after taking part in the Corpus Christi procession would have. Meanwhile, Verónica Chouza finally stayed in La Caleta for a day at the beach. Before trying to sunbathe on a cloudy day, she went to Santa Teresa school with her daughter Verónica to vote. “I’ve been bringing her since she was born so she knows what she is,” she explains. José del Pino, with his umbrella and loungers ready, also has his doubts about the result. “I think there will be some people who won’t vote,” he explained just before stepping onto La Caleta beach for its most iconic arch.

A few meters from there, next to the steps of the post office, now used as an electoral college, Chirigota street The Captain Andalusia, disguised as superheroes of the Junta de Andalucía, have chosen to sing a repertoire in which they have reviewed the President of the Junta or the Vox candidate Macarena Olona. “Gentlemen, on election day we will sing a pasodoble,” warned one of the members, dressed in the new junta logo and a bullfighter’s hat, to a diverse audience of Cadizans and tourists. “What a pity that the rulers prostitute you”, but in the end “liberty resists to the end in the hands of the people”, they sang, while in another corner of the Plaza de Abastos the chords of another street group began to resonate .

And like no other election day, the nuns have also starred in the most curious pictures of Jaén. The Poor Clares Sisters went to the school of the Chapel of San Andrés very early to vote, breaking the closure that this congregation is subjected to. And in this electoral college, the President had to place the ballot box at the entrance of the building, since several elderly people did not have access to the voting table due to the architectural barriers of this building in the historic center of Jaén. Moreover, and as in the case of Cádiz or the Sevillian district of Triana, in most municipalities the election day coincides with the Corpus Christi processions.

Aside from doubts about staying on the beach or going to the polls, election day has started without incident, apart from the delay in setting up four polling stations in three schools, which will not cause delays in the start of the campaign, as reported in happened in 2018 precisely in one of these centers, the Guadalquivir. Then as now, the absence of all Tafel members and the absence of Equo ballots caused the opening to be delayed by an hour, coinciding with Election Day there.

In the CEIP Guadalquivir de Sanlúcar, it is another of the four schools in Sanlúcar that started late. Here all six members of two of the four tables and all corresponding substitutes were missing. But in this voting center there were problems. Given the angry attitude of the voters who refused to remain at the table as proxies, the police demanded their papers, although they left anyway. Others ran straight to see people missing. “People don’t come here because they don’t want to,” they say at school. Coincidentally, in 2018 also in this center there were several absences and like today and given the refusal of the voters to stay at the table, a magistrate had to come and intervene. Today the police were alerted just in case and there was no need to call the judiciary. The two missing tables opened 45 minutes later. As they explain in the school, this is a quarter of “wealthy people” where the right usually wins in regional elections, as confirmed by the Bureau’s data.

34.14% of voters have gone to the polls in Andalusia’s elections by 2:00 p.m. this Sunday, according to data from the regional government, an increase of 4.3 points compared to the 2018 elections. The result means more than two million people have voted by that date, according to data reported by nearly 98% of polling stations. The votes, brought forward by five months by the President of the Junta de Andalucía, Juan Manuel Moreno, coincide with the start of summer and the forecast that the intense heat wave of recent days will offer a small respite. Cordoba, Jaén and Seville are the provinces where more voters went to the polls. By 2:00 p.m., almost 39% of voters had voted on the first. The lowest participation is registered in Huelva (29%) and Cadiz (31%).

The turnout in the 2018 elections was 58.65%, one of the lowest in Andalusia regional elections as only 3.6 million people turned out to vote. These elections were won by the PSOE with 33 seats, but the government pact between the PP (26 seats) and Ciudadanos (21), with parliamentary support from the Ultras of Vox (12), led Juan Manuel Moreno Bonilla to become President of the Board, although he was not the candidate of the party with the most votes. The extreme heat this weekend, the celebrations in numerous cities and the attractiveness of the beaches have made those responsible on the board fear that participation will fall again this Sunday.