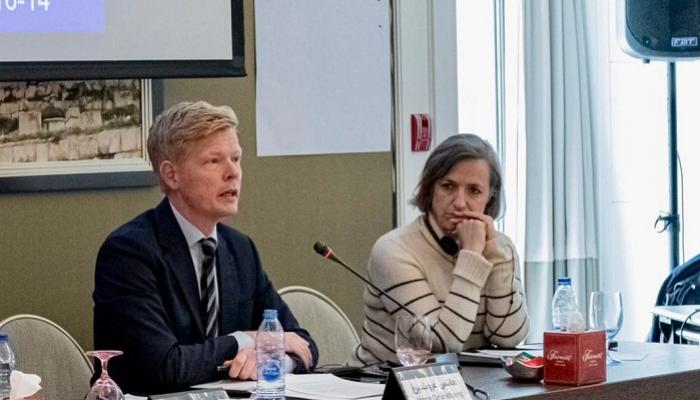 The Houthi military escalation spearheaded discussions by the UN envoy to Yemen with Yemeni parties participating in the Jordan consultations, which culminated for the second week in a row.

The UN envoy to Yemen, Hans Grundberg, emphasized the need for de-escalation measures leading to a ceasefire as an important step to provide protection for civilians, along with the continued military escalation by the Houthis to impede the efforts of the UN envoy to establish peace.

The UN envoy’s office said in a statement received by Al-Ain Al-Akhbar on Friday that “Yesterday, Hans Grundberg concluded the second week of bilateral consultations with a diverse number of Yemeni stakeholders in the context of his efforts to guide its framework, the aim of which is to chart a path towards a political solution”. sustainable conflict.

In the second week, Grundberg held consultative meetings with leaders of the General People’s Congress, representatives of the Southern Transitional Council and the Hadramawt Inclusive Conference, as well as security experts, including military and security specialists, and civil society leaders. .

According to the statement, the discussions focused on the design of the multi-track operation and the definition of its guiding principles and components, and highlighted the need for de-escalation measures leading to a ceasefire as an important step in providing protection to civilians and improve the arrival of goods and the movement of civilians, referring to the obstacles of the Houthi terrorist militia.

According to the declaration, all participants stressed the urgent need to address the urgent priorities of improving the economic conditions of civilians and reducing the impact of the conflict on civilians, without neglecting other long-term issues related to the final resolution of the conflict and the future of Yemen, including the question of the south.

Participants stressed the importance of reaching a regional and international consensus to end the conflict in Yemen.

The statement noted that the in-depth discussions contributed to formulating joint short-term and long-term priorities for the security track, including visions on how security issues could support the resumption of political negotiations.

Participants in these consultations also emphasized the need for an inclusive process that addresses the root causes of the conflict and the need to support local security institutions to help restore basic services to civilians.

They also emphasized the need to support the governance of the security sector in Yemen and improve cooperation between civil society and security institutions to address human rights issues, according to the statement.

In the first week, the United Nations envoy to Yemen met with representatives of 4 parties in bilateral consultations to develop a new three-way economic, security and political settlement plan, co-founded by the various forces active in Yemen .

Next week, he is scheduled to meet with several other Yemeni political parties, including the Al-Rashad Union Party, the National Resistance, and various Yemeni entities.

Despite this, many Yemenis are not counting on Grundberg’s consultations to make a fundamental breakthrough in ending the coup, especially with the Houthi militias continuing military escalation as well as continued attacks on neighboring countries to serve the agenda. Iranian, according to observers. .