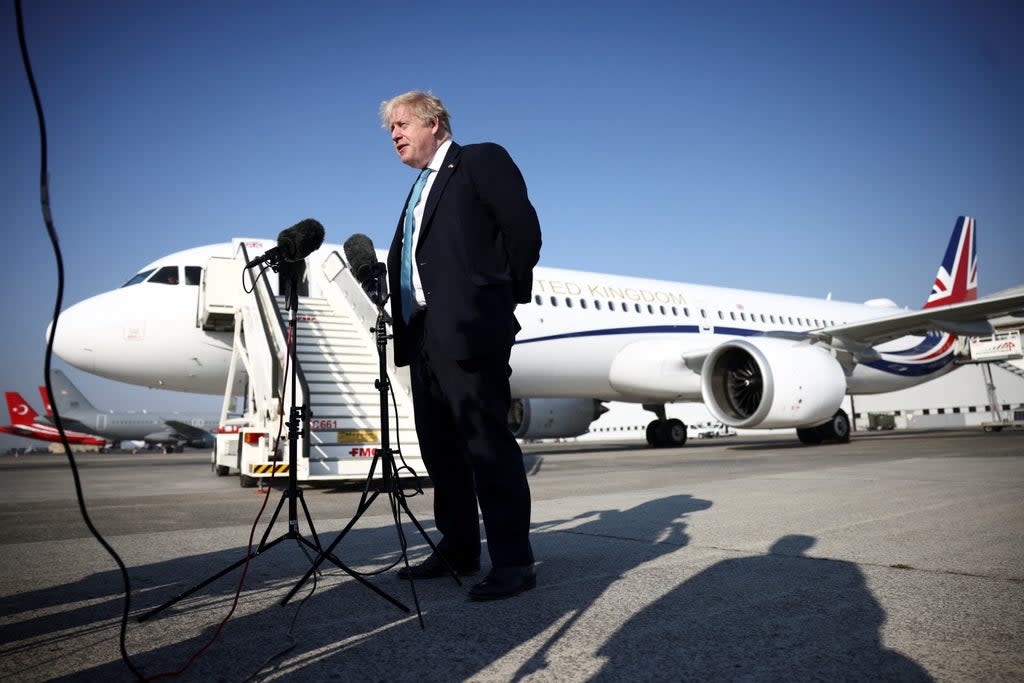 Boris Johnson hit the paramilitary Wagner Group, seen as Vladimir Putin’s private army, in a series of new sanctions as he urged allies to “step up” support against the Kremlin’s invasion of Ukraine.

The prime minister is using an emergency NATO summit in Brussels on Thursday to commit to a new package, including 6,000 more missiles for Ukraine and pressing to prevent the Russian president from using his gold reserves.

Johnson will be joined by world leaders, including US President Joe Biden, as Ukraine’s President Volodymyr Zelensky called rallies around the world to mark a month since Russia launched its attack.

Zelensky will address the meeting remotely, which is expected to approve the formation of four new battle groups in Eastern Europe, adding thousands more troops.

Speaking to broadcasters after landing in the Belgian capital, Johnson said: “Vladimir Putin is clearly determined to double down on his path of violence and aggression.”

Describing Putin’s treatment of the Ukrainians as “absolutely brutal,” he added: “We have to step up. We have to increase our support.”

“We have to harden the economic vice around Putin, sanctioning more people today as we are sanctioning the Wagner Group, seeing what we can do to prevent Putin from using his gold reserves and also doing more to help Ukrainians defend themselves. . .”

The Foreign Ministry said it was sanctioning a further 65 entities and individuals, including Russian billionaire Eugene Shvidler and Galina Danilchenko, who was installed by Moscow as mayor of occupied Melitopol in southeastern Ukraine.

It has been warned that the Wagner Group plans to assassinate Zelensky while his forces continue to put up much stronger resistance than many anticipated.

Western officials hoped they were supporting a Ukrainian insurgency at this point in the war, rather than the nation’s army, which is holding out.

Hailing him as “one of the most extraordinary war leaders in recent times,” Johnson said Zelensky wants tougher sanctions against the Putin regime and “very targeted defensive military support” for his armed forces.

“And that, we are determined to provide,” Johnson said.

He also criticized Moscow’s bid to host Euro 2028, saying Russia should withdraw its forces and the soccer tournament should be handed over to Ukraine.

“The idea of ​​Russia holding any kind of football tournament or any kind of cultural event right now is beyond satire,” he said.

“The best possible thing would be for all Russian armed forces to immediately withdraw from Ukraine and hand it over to them, of course.”

However, those comments came just a day after the UK and Irish football associations submitted their joint formal interest in hosting the tournament.

Putin should be under no illusions: we stand united with our allies and will continue to tighten the screw on the Russian economy to help ensure that it fails in Ukraine. there will be no truce

Six more banks were among those hit with asset freezes and travel bans, as was one of the world’s largest diamond producers, Alrosa, and Polina Kovaleva, the stepdaughter of Russian Foreign Minister Sergei Lavrov.

Foreign Secretary Liz Truss, who was traveling with Johnson, said: “These oligarchs, corporations and hired thugs are complicit in the murder of innocent civilians and it is only right that they pay the price.

“Putin should be under no illusions: we stand united with our allies and will continue to tighten the screw on the Russian economy to help ensure that it fails in Ukraine. There will be no truce.”

Before the start of the summit, Russian fraudsters, suspected of working for the Kremlin, published a full version of their video call with Defense Secretary Ben Wallace.

The Defense Ministry has warned that the doctored footage, in which Wallace thought he was talking to Ukrainian Prime Minister Denys Shmyhal, is doctored and propagandistic.

Speaking to the impostor, Mr. Wallace says, “I just looked at our new anti-aircraft missiles we’re sending you, which is better than Stinger, it will work at night, it’s a very, very fast missile.” and it will help close the skies to Russian planes.”

NATO has rejected Ukrainian demands that a no-fly zone be imposed on the nation for fear it would drag the West into direct conflict with Russia.

During Biden’s attendance at the summit, the US administration announced that it had formally assessed that Russian forces had committed war crimes in Ukraine.

Secretary of State Antony Blinken cited the defeated city of Mariupol, where some 100,000 people remain trapped by chronic shortages of food and clean water.

In a call with Zelensky on Wednesday, Johnson called the shelling of civilian areas in the city “unconscionable” and demanded a response from the international community.

It is also supplying and training Ukrainian troops in the use of Starstreak high-velocity anti-aircraft missiles, as well as providing bulletproof vests, helmets and combat boots.

The Government will provide an additional £4.1m to the BBC World Service to counter disinformation in Russia and Ukraine, as well as new support for the International Criminal Court (ICC).