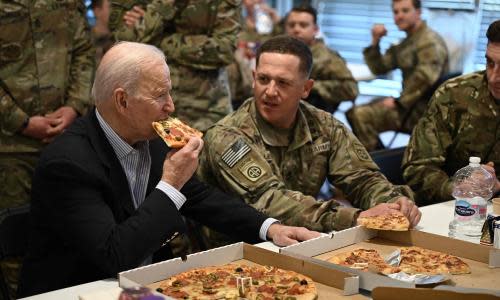 Joe Biden is scheduled to deliver a “significant speech” on the Russian invasion of Ukraine on Saturday after arriving in Warsaw, where he will meet with Polish President Andrzej Duda.

Biden and Duda are expected to discuss Warsaw’s desire for more US troops to bolster NATO’s eastern flank, as well as the idea of ​​an international peacekeeping mission proposed by Poland’s ruling party leader Jarosław Kaczyński. US diplomats have expressed skepticism about the idea, which Russian Foreign Minister Sergei Lavrov has criticized as “very reckless.”

US officials said Friday that Russian forces in Ukraine appeared to have stopped their ground offensive aimed at capturing the capital, kyiv, and were focused on gaining control of the Donbas region in the southeast.

Russia’s Defense Ministry said the first phase of its military operation was “generally” complete and its forces would focus on the “liberation” of Donbas. The announcement was seen as an indication that after a failed month-long effort to subjugate Ukraine, the Kremlin may have to scale back its targets considerably.

Mariupol authorities have said as many as 300 people were killed in a Russian bombardment of a theater last week, putting a death toll for the first time in the deadliest individual attack since Moscow launched its invasion, which has included many attacks on targets. apparently civilians. and residential areas.

During a video address to European Union leaders, Ukraine’s President Volodymyr Zelenskiy clashed with Hungary’s President Viktor Orbán, who for years has been Vladimir Putin’s staunchest ally in the EU. The Hungarian government will not join other EU countries in supplying weapons to Ukraine, nor will it allow weapons to pass through its territory.

“Listen, Viktor, do you know what’s going on in Mariupol?” Zelenskiy said, drawing a line between the brutal bombing and Hungary’s past. “There is no time to hesitate. It’s time to decide.”

Zelenskiy has said that with 16,000 Russian soldiers dead so far, there must be serious talks to end the war. Speaking late on Friday, Zelenskyiy reiterated Ukraine’s terms, including sovereignty and territorial integrity, stressing that conditions must be “fair”, declaring: “The Ukrainian people will not accept otherwise.” Zelenskyy said 26,000 residents had been evacuated from Mariupol although “the situation in the city remains absolutely tragic.”

US National Security Adviser Jake Sullivan said Biden’s speech in Warsaw on Saturday “will speak to what is at stake right now, to the urgency of the challenge ahead, to what the conflict in Ukraine means. for the world and why it is so important that the free world stands united and resolute in the face of Russian aggression.”

The White House said Biden “will deliver remarks on the united efforts of the free world to stand with the people of Ukraine, hold Russia accountable for its brutal war, and defend a future rooted in democratic principles.”

Biden told reporters in Brussels on Thursday that his visit to Eastern Europe was designed to “reinforce my commitment to the United States to make sure that we are a major player in handling the relocation of all those people, as well as assistance.” humanitarian needs both inside and outside the country. Ukraine and outside of Ukraine.

On Friday, Biden and European Commission President Ursula von der Leyen announced that the US would provide “at least” 15 billion cubic meters (bcm) of liquefied natural gas to the EU in 2022 to help Europe curb its consumption of Russian gas.

Related:Will Poland’s good boy status over Ukraine help its standing in the EU?

Biden visited the Polish city of Rzeszów, about an hour’s drive from the Ukrainian border, in a symbolic show of support for Eastern European states that are seeing Russian aggression wreak havoc on their neighborhood.

During the visit, which the White House had kept secret until shortly before his arrival, the US leader was able to learn first-hand about international efforts to help the more than 2 million Ukrainian refugees who have found temporary refuge from the war in his country, Poland. , and met with US troops reinforcing NATO’s eastern flank.

Air Force One landed at Rzeszów-Jasionka airport in southeastern Poland shortly after 2 p.m. local time. Rzeszów is about 105 miles (170 km) from Lviv, the city that could become Ukraine’s de facto capital if kyiv falls to Russian forces.

Wearing a black mask, the US president was greeted by Polish defense minister Mariusz Błaszczak and a host of military generals, though not Duda, whose plane from Warsaw was turned back en route to Rzeszów and had to make an emergency landing due to technical problems. An official from his office said Duda had not been in any danger.

With the timetable for the visit turned upside down, Biden first visited a barbershop at the G2A Arena next to the airport, where 14 US soldiers sat in folding chairs waiting for their haircuts. In the adjacent cafeteria, a US president without a tie joined service members for a pizza lunch at six long tables.

Over a slice of pepperoni and jalapeno pizza, Biden regaled paratroopers with stories about his late son Beau’s deployment to Iraq and his family to Ireland.

Related: Will Poland’s good boy status over Ukraine help its standing in the EU?

He later addressed a group of soldiers in more formal remarks, citing the late Secretary of State Madeleine Albright to underscore the importance of NATO’s role in the current crisis.

“The Secretary of State used to have an expression. She said, ‘We are the essential nation,’” Biden told the troops. “I don’t want to sound philosophical here, but you are in the middle of a fight between democracy and an oligarch.”

The 5,000-strong first main body of the elite US 82nd Airborne Division, which specializes in parachute assault operations, has been based in Poland since February 6.

The presence of US troops in the area has been low-key, making visits to orphanages and the Auschwitz-Birkenau concentration camp rather than displays of military force visible to the local population.

After his meeting with the military, Samantha Power, director of the United States Agency for International Development, was to brief Biden on the humanitarian situation on the border with Ukraine.

Poland has taken in more refugees from Ukraine than any other state in Europe, and the United Nations estimates their number to be at least 2.2 million.